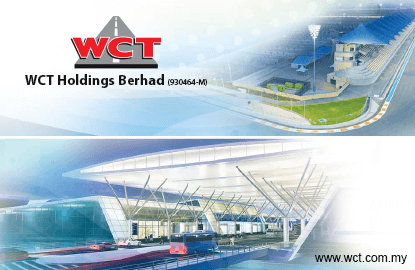 His appointment came after he bought a 19.67% stake from the private vehicle of WCT Holdings' co-founder and managing director Peter Taing Kim Hwa yesterday.

According to WCT's filing on Bursa Malaysia’s website, Lim, who is also known as Desmond, has more than 33 years of management experience in property development, construction, retail design and retail development as well as corporate management

He was appointed executive chairman of Malton Bhd on Feb 15, 2001.

Meanwhile, Taing, 63, stepped down as managing director of WCT Holdings today, according to the construction outfit-cum-property developer.

The reason was because Taing had ceased to be a substantial shareholder in the group.

"His duties and responsibilities as the executive chairman will be reassigned to and assumed by the other executive members of the Board," Malton added.

Although the transaction price was not disclosed in the filing, Bloomberg data showed the shares changed hands in several blocks at RM2.50 per piece. The transacted price represents a 75 sen or 42.85% premium to yesterday's closing price of RM1.75.

Assuming that all the 245.71 million shares were transacted at RM2.50 per share, it is estimated that Lim forked out RM614.28 million to WCT Capital, which is co-owned by Taing and Wong Sewe Wing.