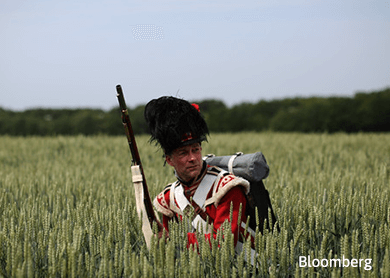 YESTERDAY marked the 200th anniversary of Waterloo. It was a fascinating battle not just because it meant the end of Napoleon Bonaparte, but also because no single nation won it. It also has something useful to say as the United Kingdom draws lines of engagement ahead of a referendum on whether or not to leave the European Union.

The essential details are well known. The Duke of Wellington chose to make his stand on some farmland outside Brussels, at the head of a British-led army, two-thirds of which wasn’t British. This allied force of Brits, Germans, Dutch and Belgians survived the morning thanks in significant part to a few hundred soldiers who heroically held onto the strategically located Hougoumont farm.

Napoleon’s troops were not broken, however, until a regrouped Prussian army under Marshal Gebhard Leberecht von Bluecher — defeated by the French and crushed beneath a horse just two days earlier — arrived on the battlefield late in the day. It was, as Wellington said afterward, “a damn close-run thing.”

As a Brit, how does one think about this? Not, surely, as a British victory. As proof that Germans are Britain’s reliable allies against the French? Hardly, after World Wars I and II. The more obvious conclusion is that the UK is a country inevitably engaged in Europe’s affairs, and able to prevail only with European allies.

In the UK, however, that’s not a popular way to think about Europe. Margaret Thatcher encapsulated the alternative philosophy wonderfully when, some years after being forced to step down as prime minister, she returned to a Tory party conference and said in a dinner speech: “My friends, we are quite the best country in Europe.”

This is a state of mind. It says that the best thing to do with Europe is to stand against it or keep it at arm’s length, sticking instead with the UK’s true friends — the Americans, the Canadians and the Australians. The world view that goes with this sees the British at heart as a seafaring nation, with a “buccaneering” spirit best symbolised by the lionised, yet piratical, exploits of Sir Walter Raleigh as he plundered gold from Spanish galleons returning from the New World. British sea power built an empire outside Europe, after all.

This state of mind suggests, too, that for reasons of language and culture the Brits are much closer to their Anglo cousins than their European ones.

And yet, even in 1815, when Britain had an overseas empire, it could not ignore Europe. The Napoleonic wars had driven the UK’s national debt above 200% of gross domestic product, and a substantial faction in London argued to let Napoleon have Europe, rather than fight, when he escaped from exile on Elba. Yet Britain had to get involved in the continent’s economy and power struggles, and couldn’t win except by allying itself with other Europeans.

The UK is, of course, distinctive. It’s an island, protected from invasion by both Napoleon and Hitler by a 40-kilometre-wide stretch of water. It has a common law legal system and an overdependence on financial services that makes it Europe’s banking centre. But the lessons of Waterloo are probably more useful today than the World War II memories Thatcher evoked to support her growing hostility to the EU “superstate”.

The coming referendum on whether Britain should stay in the EU, now expected sometime next year, is likely to be dominated on one side by Thatcher’s mythology of British separateness, and the corresponding belief that only if the UK frees itself from the EU can it again become that free-spirited, buccaneering, enterprising nation.

In reality, the UK would remain more European than buccaneer, or for that matter American — with a tax base high enough to provide universal health care, safety regulations that make most European governments look like risk-takers, and a meddling centralised state more familiar to Parisians than New Yorkers. With so little to gain, the British may not want to risk being on their own, outside a resentful EU that unites the Prussians, Dutch and French against it. I suspect Wellington would agree. — Bloomberg