Watches: A hypnotic, colour-changing watch to beat back winter’s doldrums 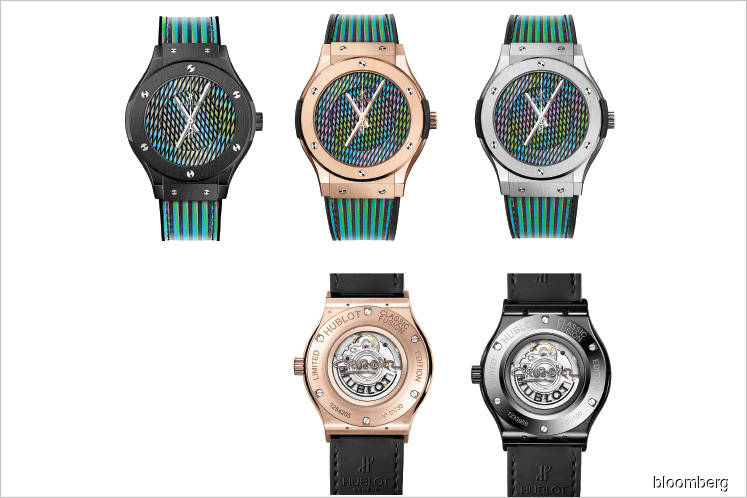 THE latest execution of Hublot’s Classic Fusion gets a colourful twist thanks to the late Carlos Crus-Diez, who passed away this August at the age of 95. Cruz-Diez is well known for his 70-year career exploring the idea that colour is circumstantial, rather than a fixed and entirely known quantity. His interpretation is that colour is fluid. His work has spanned a multitude of mediums; he has worked with light installations, paintings, and sculptures. He was a pioneer of the ’60s Op Art movement that focused on optical illusions, specifically the idea of movement created by a static image. In 1965, he created his first Chronosaturation series, where an observer would progressively walk through different galleries, each with intense fluorescent bulbs in red, green, and blue. The idea was that the pieces of art (or rather, the viewer’s interpretation) in each gallery would be drastically affected by the presence of the light. Moving from one gallery to the next would impart residual light on the observers’ eyes that would fade over time, in turn making the works change appearance in the amount of time that observers’ eyes would take to adjust to the new lighting conditions.

The newly introduced Classic Fusion collection plays off these notions of colour impermanence and fluidity. On the dial of the Classic Fusion is an interpretation of Cruz-Diez’s work, Chronointerference, from 1964. It consists of two unique discs, both driven independently by the calibre MHUB1100.H. These coloured dynamic discs move in conjunction with the time. As time passes, the appearance of the dial completely changes as the pattern shifts. It is the same concept that Cruz-Diez always played with, except Hublot has managed to translate this idea from a more conventional medium onto the dial of one of their core models. The watch comes in three materials and two sizes: Ceramic, titanium, and King Gold, in both 38mm and 45mm case sizes.

At the launch of the watch last Saturday at Art Basel Miami, I had the opportunity to speak with Carlitos Cruz-Diez about his father’s legacy and the process of applying the concepts of Cruz-Diez’s lifelong colour study to a Hublot timepiece. During the conversation, he pointed out that over the course of aiding in the creation of the watch, he learned that the watch community and art community come from totally different camps. The core appreciation for detail, craftsmanship, and emotion is certainly there with both communities, but the approach is entirely different. Collecting art has always been an emotional process, whereas the proliferation of watches as a hobby — and the community it brings — is relatively recent. Historically, aside from a number of small manufacturers, horology was treated as an industrial pursuit. The goal back then, for the most part, was to produce an accurate instrument rather than a piece of art. The Cruz-Diez watch occupies an unusual place, as the execution of the watch requires a certain reverence for the artist whose work laid the foundation for its execution, while also working within Hublot’s production and manufacturing limitations.

The minute hand is anchored to the outer step of the dial, while the hour hand is anchored to the inner step of the dial, and as the hands move, so do the patterned discs, creating a kaleidoscope-like visual effect. Part of Cruz-Diez’s contribution to the gallery experience is helping shift the experience from simply being “contemplative”, where one simply stands in front of the painting or sculpture and takes it in from one vantage point, to being kinetic, where the art in question changes appearance as the observer moves around the room. Watches by nature are contemplative. Anyone who has found themselves staring at their wrist without even paying attention to the time has experienced this. But this particular Hublot certainly emphasises the kinetic aspect of Cruz-Diez’s philosophy. Technically, the appearance of the dial changes every fraction of a second, although it is not quite noticeable to the human eye. Over a few minutes it certainly is, however. Of course, there is a shortcut: Setting the time also sets in motion this optical illusion. — Bloomberg

This article was originally published on Hodinkee.