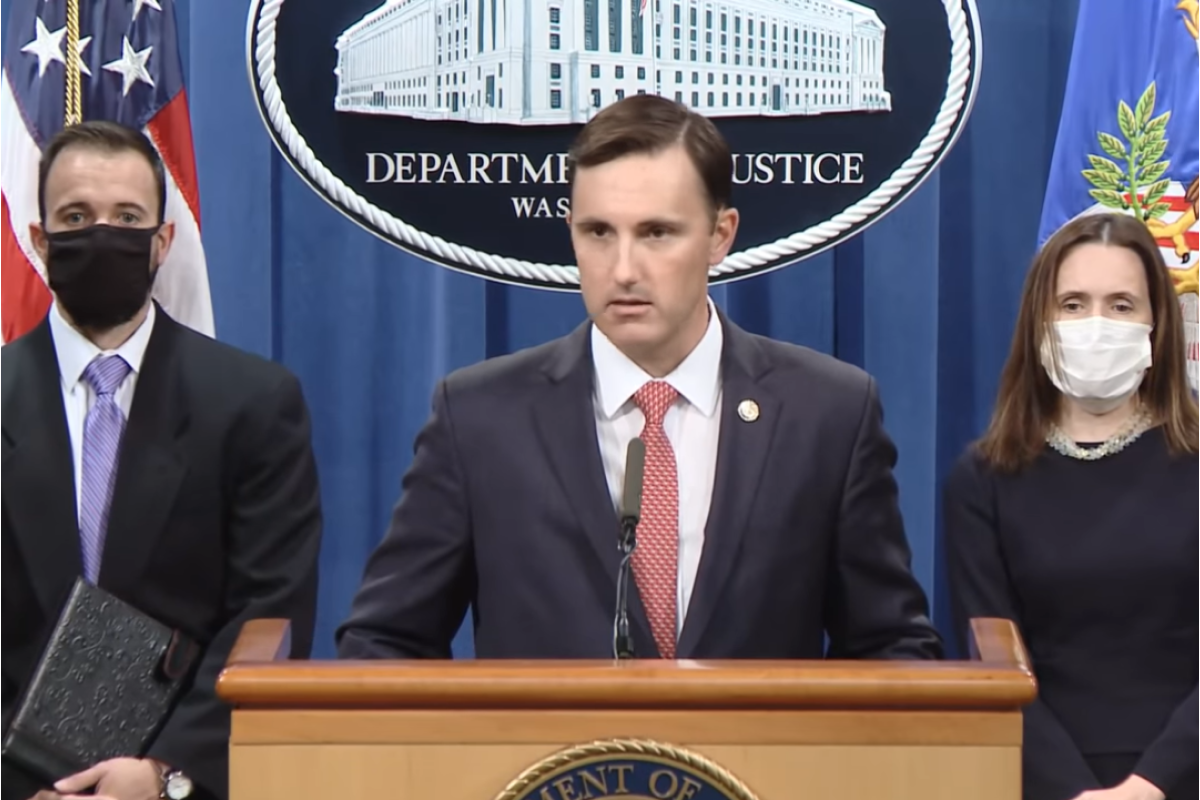 Remarks as Prepared for Delivery

Good Afternoon.  I am Brian Rabbitt, Acting Assistant Attorney General for the Department of Justice’s Criminal Division.  I am joined today by Acting U.S. Attorney Seth DuCharme of the Eastern District of New York, Assistant Director in Charge Bill Sweeney of the FBI, Stephanie Avakian, Director of the Enforcement Division at the Securities and Exchange Commission, and Assistant General Counsel for Enforcement Jason Gonzalez of the Federal Reserve Board.  We are here today to announce enforcement actions of historic significance.

This morning, the department filed criminal charges in New York against The Goldman Sachs Group and its Malaysian subsidiary, charging each with conspiracy to violate the anti-bribery provisions of the Foreign Corrupt Practices Act.  These charges stem from Goldman’s central role in a massive global scheme to loot billions of dollars from the government-run Malaysian investment fund known as “1MDB” and the subsequent use of those funds by senior Goldman bankers and their co-conspirators to pay billions of dollars in bribes to senior government officials and others around the world.

Goldman Sachs (Malaysia) pleaded guilty to those charges just a short while ago, and its parent entity, The Goldman Sachs Group, has entered into an agreement with the department deferring prosecution for three years provided the bank meets certain conditions.  In a reflection of the seriousness of the bank’s conduct, today’s resolution includes the largest monetary penalty ever paid to the United States in a corporate criminal foreign bribery resolution and requires the bank to pay a total of over 2.9 billion dollars in criminal fines, penalties, and disgorgement.

1MDB was a multi-billion-dollar investment fund created by the Malaysian government to promote economic development.  In 2012 and 2013, Goldman received approximately $600 million in fees — an unusually large amount — for its work helping 1MDB raise $6.5 billion by issuing and selling bonds on international markets, and for other services.

However, billions of dollars were later stolen from 1MDB, some of which was then used to bribe corrupt officials from Malaysia and Abu Dhabi.   These criminal proceeds were laundered through U.S. and other financial institutions and used to make extravagant purchases around the world, including high-end real estate, yachts, art, and other luxury goods.

As the bank admitted today, senior Goldman bankers played a central role in this scheme, conspiring with others to siphon over $2.7 billion from 1MDB.  They used those funds to line their own pockets and to pay $1.6 billion in bribes.  In addition to the involvement of several Goldman executives, other personnel at the bank allowed this scheme to proceed by overlooking or ignoring clear red flags.

Today’s resolution is significant.  It includes criminal charges against the bank and a guilty plea by its Malaysian subsidiary.  It also requires Goldman to disgorge the entirety of its 600 million dollars in fees, pay a $2.3 billion penalty, and admit wrongdoing.  In short, it imposes serious consequences that reflect the central role that Goldman and its employees played in this serious criminal scheme.

Today’s charges and plea are the culmination of years of work by the department’s Criminal Division, the U.S. Attorney’s Office for the Eastern District of New York, the FBI’s International Corruption Unit, and the Internal Revenue Service – Criminal Investigation.

This resolution marks a major milestone in our efforts to fight foreign corruption involving U.S. businesses.

As I mentioned, it involves $1.6 billion in bribes — the largest amount of bribes ever paid by a company to secure business in violation of the FCPA.

Those bribes, in turn, resulted in $2.7 billion in losses to 1MDB which is the greatest loss amount ever charged in an FCPA matter brought by the department.

Those bribes also ensured that Goldman received approximately $600 million in fees, which is one of the largest profits ever secured by a company through foreign bribery.

And as I mentioned, in recognition of the seriousness of this misconduct, today’s resolution involves the largest monetary penalty ever paid to the United States in a corporate criminal foreign bribery resolution.

Beyond numbers, this case is also significant because it involved a massive corruption scheme carried out by executives of a preeminent American bank that caused significant harm.  That harm was borne principally by the people of Malaysia, who saw a fund created to benefit them — and for which they remain financially responsible — instead turned into a piggy bank for corrupt public officials and their cronies.

This scheme also undercut confidence in the Malaysian government and allowed billions of dollars in tainted funds to move through the U.S. and global financial systems.  The United States is home to many of the world’s preeminent financial institutions.  As today’s charges and guilty plea show, the department will not hesitate to hold them accountable for harm they cause here and abroad.

In fact, today’s resolution is just the latest action the department has taken to hold wrongdoers accountable for, and to assist victims of, the 1MDB corruption scheme.

In addition to today’s charges and plea, the department has announced charges against three individuals in connection with this corruption scheme, including two Goldman executives.  One of those executives — a former participating managing director and chairman of the bank’s Southeast Asia operations — has pleaded guilty.  The other — a former managing director and head of investment banking for Goldman Malaysia — awaits trial.  The third, a foreign national, remains a fugitive.

The allegations against these latter two individuals are, of course, just allegations unless and until they are proven beyond a reasonable doubt.  But these individual prosecutions, together with the significant resolution we are announcing today, demonstrate the department’s steadfast commitment to punishing corporate misconduct by prosecuting not only corporations, but also culpable executives where appropriate.

I would also like to note that the department’s involvement in the 1MDB matter has not been limited to criminal prosecutions.  It began more than four years ago when, in the largest collections of forfeiture actions ever brought by the department, we filed civil suits that collectively sought to recover more than $1.5 billion in assets connected with this scheme.

The department’s work has led to the identification and forfeiture of over $1.1 billion in assets traceable to 1MDB.  Of that, the department has already returned, or assisted Malaysia in recovering, more than $620 million — and we expect that many millions of dollars more will be returned in the future.

These forfeiture efforts were led by the Criminal Division’s Money Laundering and Asset Recovery Section, in partnership with our colleagues in the U.S. Attorney’s Office for the Central District of California, the FBI, and the IRS.  They were also made possible through cooperation with partners in Switzerland, Singapore, Luxembourg, Malaysia, and the United Kingdom.

This case is also historic because of the unprecedented coordination that made it possible.  Today’s resolution includes crediting of Goldman’s parallel resolutions with no fewer than nine other U.S. and foreign authorities — the largest number ever in a foreign corruption case.

Beyond sheer numbers, this unprecedented coordination is notable for two additional reasons.

First, it shows criminals cannot escape responsibility simply because their misconduct spans jurisdictions and law enforcement authorities.  The Department of Justice and its partners — in the U.S. and abroad — will work in parallel to investigate and prosecute fraud and corruption, no matter where it occurs.

Second, it demonstrates that the department will ensure that fraud and corrupt conduct is punished appropriately, but not unfairly.  Where companies work in good faith to facilitate a coordinated resolution, we will do our part by providing appropriate crediting and not “piling on” or imposing duplicative penalties.

Finally, I would like to note that this case was investigated and prosecuted in part during a global pandemic.  It is a tribute to our team and our partners that they overcame that challenge and worked diligently to resolve this case.  As this resolution shows, the Criminal Division and the rest of the department remain “open for business.”

Let me end by returning to an earlier point: American financial institutions, and the U.S. financial system, are the envy of the world.  We have a duty to ensure that they remain free from corruption and that their considerable influence and power is used for good, not to harm others.

The 1MDB fund held tremendous promise for the Malaysian people.  But instead of realizing that promise, it was looted by corrupt officials and their co-conspirators, including senior Goldman bankers.  This criminal conduct is antithetical to good government.  It hurts free markets, undermines the rule of law, creates an unlevel playing field, and puts our national security at risk by enabling corrupt regimes.  It also erodes global confidence in our American financial institutions and the U.S. financial system.

Today’s resolution, coupled with other actions the department has taken over the last five years, represents a major step towards restoring that confidence and making the people of Malaysia whole.   It imposes serious consequences on Goldman for the bank’s serious misconduct.

Thank you.  I will next turn the podium over to Acting U.S. Attorney Seth Ducharme.