SHARES of Berjaya Food Bhd (BFood) have doubled in value the past three months but CIMB Research, for one, reckons there’s still over 40% upside potential for the company that runs Kenny Rogers Roasters (KRR) restaurants as well as Starbucks Malaysia and Jollibean outlets here.

BFood is “a giant franchisee  in the making” that’s worth RM4.33 apiece, CIMB said in its Oct 3 initiation report, implying 49% upside potential from its RM2.90 close on Oct 8. This values BFood at 23.7 times calendar year 2016 earnings, a premium over its peers given a stronger three-year projected earnings compound annual growth rate of 49% versus the peer average of 13%.

According to CIMB, “investors with a higher risk appetite should consider its warrant”, BJFood-WA, which is exercisable at 70 sen, has a one-to-one conversion ratio and nearly three years to run before expiring on Aug 13, 2017.

BJFood-WA closed at RM2.10 last Wednesday, at a small 3.45% discount to the underlying stock.

Assuming zero premium to the mother share, BJFood-WA should theoretically be worth 72.9% more at RM3.63 if its underlying stock reaches CIMB’s RM4.33 target price.

Similarly, BJFood-WA should be worth RM2.80 apiece or 33% more if the underlying share appreciates 20% to reach AmResearch’s more conservative target price of RM3.50.

The most conservative is Kenanga Research, which in a non-rated note dated Sept 2, valued BFood at only RM3.03 apiece, being 19.5 times FY4/16 fully diluted earnings. 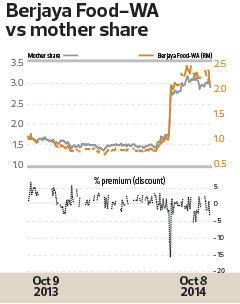 BFood — which holds franchise rights to Kenny Rogers Roasters in Malaysia, Indonesia and Cambodia; Starbucks in Malaysia and Brunei; and owns Jollibean worldwide — is 51% owned by Berjaya Corp Bhd. The latter owns franchise rights to Wendy’s, Papa John’s, KRR China and Krispy Kreme — businesses that CIMB reckons could be injected into BFood once they turn profitable. “First in the pipeline could be Papa John’s pizza in two years’ time,” writes CIMB, which also reckons that BFood will see another earnings boost from distributing Starbucks-branded products in supermarkets.

While consumer spending might slow next year with the introduction of the Goods and Services Tax in Malaysia, CIMB reckons that Starbucks consumers belong to a less affected consumer group.