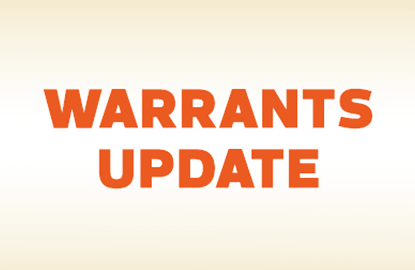 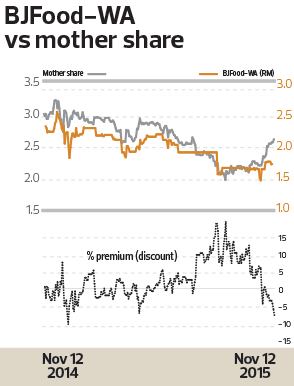 Berjaya Food Bhd (BJFood), the largest food and beverage outlet operator in the country by market capitalisation, is deemed a growth stock by most research analysts, backed by its major expansion plans and potential to tap new markets. BJFood (fundamental: 1.15, valuation: 2.10) operates the Kenny Rogers Roasters chain of restaurants in Malaysia, Indonesia and Cambodia. It is also the franchise holder of Starbucks in Malaysia and Brunei as well as Jollibean in Singapore and Malaysia.

BJFood’s issued warrant, BJFood-WA, could provide a cheaper proxy to investors who wish to ride the company’s bullish prospects. It carries a strike price of 70 sen and a one-to-one conversion ratio. The five-year warrant expires on Aug 8, 2017.

Year to date, BJFood’s share price has dropped 16% while BJFood-WA has declined 21%. It is worth noting that the warrant is currently trading at a discount of 7.6% to the mother share, which closed at RM2.61 on Nov 12.

At zero premiums, BJFood-WA would theoretically be worth RM1.91. This would present a potential upside of 11.7% from the warrant’s closing price of RM1.71 on Nov 9. The warrant was not traded on Nov 12.

A quick check on Bloomberg shows that BJFood has a consensus target price of RM3.14, giving it a 20% upside potential from last Thursday’s close. That means at zero premium, BJFood-WA would theoretically be worth RM2.44 if its mother shares hits RM3.14. That presents an even higher upside of 43%.

Maybank IB Research analyst Kevin Wong has a “buy” recommendation on BJFood with a RM3.10 target price, slightly below consensus.

“We like BJFood for its strong earnings growth catalysts from Starbucks and decent valuations,” says Wong in a Nov 10 note, adding that Starbucks is poised to lift BJFood’s forward revenue to new highs as it plans to open 100 more Starbucks outlets in Malaysia from the financial year ending April 30, 2016 (FY2016) to FY2019.

The expansion plan is expected to lift Starbucks’ revenue contribution to BJFood between 70% and 73% in FY2016 to FY2018, up from 57% in FY2015. The coffee company also plans to widen its beverage business and tap new markets by entering the fast-moving consumer goods (FMCG) segment by end-FY2016.

BJFood is trading at a price-earnings ratio of 23.4 times, which is above the average PER of 18.6 times for the Malaysian consumer sector. Wong, however, highlights that BJFood offers rapid earnings growth potential compared with the sector’s minimal 4% earnings growth. If he’s right about the company’s future, the stock’s premium will be justified.