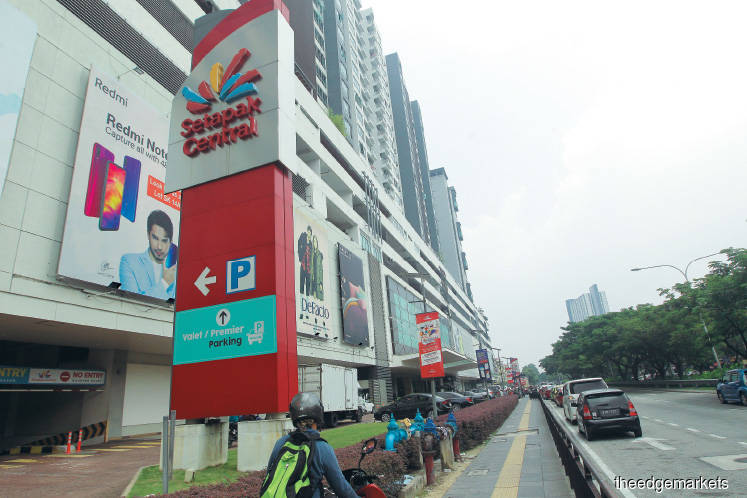 Setapak is one of Kuala Lumpur’s oldest suburbs, and within the area is Wangsa Maju, one of the largest townships in KL. Formerly a tin mining hub and rubber estate, Setapak was first inhabited the Minangkabau and Orang Asli. Before Wangsa Maju was built in 1984, the site was part of the Setapak rubber estate in the 1900s and 1980s. Both areas have since seen significant growth.

“Setapak is known as a student-populated area, so the rental prospects remain healthy,” says Foo.

The crowds in Setapak have increased over the years, following the development of condominiums, shopping malls and commercial properties. Among the condos are Setapak Green UOA Group, Platinum Hill PV8 Platinum Victory Sdn Bhd and Hedgeford 10 Residences Hedgeford Sdn Bhd.

“One of the factors that make Setapak an attractive place to live is the short distance to the city centre and relatively lower house prices,” says Foo.

The upcoming Sungai Buloh-Serdang-Putrajaya MRT (mass rapid transit) line will include a station — Sentul West — in the neighbouring Sentul, which will benefit Setapak residents in terms of greater accessibility.

“With the abundance of offerings in several segments that fully support families and student lifestyles, Wangsa Maju has the potential to thrive with improvements and increased access to roads to counter congestion,” says Sulaiman.

Setapak and Wangsa Maju boast a mix of cuisines for people from all walks of life.

For local Chinese food, try the mouth-watering, charcoal-fried Moonlight Hor Fun in Hong Lai Restaurant. The restaurant, which opens at night, is usually packed with customers, some of whom are even willing to sit along the corridor outside to enjoy their food.

Hong Lai’s signature Yue Guang Hor Fun (Moonlight Hor Fun) is stir-fried on charcoal fire until the “hor fun” (a type of Chinese noodles) has absorbed the black soy-based sauce. A raw egg is then placed on top of the noodles to create a silky texture when eaten.

Fans of bubble tea should visit The Alley, a well-known bubble tea chain from Taiwan. Located at Metro Genting Kelang in Setapak, The Alley’s signature drink — Brown Sugar Deerioca Milk Tea — is a must-try for first-timers. One of the things that make this shop special is its homemade tapioca pearls, which give a better texture and aroma to the drink.

Although it is a bit pricey compared with other local bubble tea chains, it has a perfect balance of sugar and milk, as well as the fragrance of tea and chewy tapioca pearls. Customers have been known to queue for an hour just for this particular bubble tea.

Another popular spot is Kelate Kitchen in Taman Setapak. As the name suggests, the restaurant serves Kelantanese food. Try its Nasi Kukus King, which is topped with fried chicken, special sambal and curry. The Nasi Kerabu Kambing and Teh Tarik Madu Special are also good.

Over in Wangsa Maju, the 30-year-old Wahab’s Cendol comes as a highly recommended dessert place for tourists and locals. Originally a night market stall, Wahab’s Cendol has expanded into a full-fledged restaurant, offering a selection of desserts and snacks such as cendol and rojak.

If you are looking for high-quality meat dishes at an affordable price, you should not miss out Stiq steakhouse in Section 2, Wangsa Maju. Established in October 2017, Stiq offers meat dishes prepared sous-vide style, which is a method of cooking often used in high-end hotel kitchens and as such, is uncommon in Malaysian restaurants.

The sous-vide technique relies on circulating water to transfer heat to food that is sealed in an airtight bag, which allows the food to cook slowly over a period of time. This is how Stiq prepares its tender, juicy steaks.

Also recommended is Hayaki Kopitiam, a casual café that serves Kelantanese dishes. One of its popular items is Nasi Kukus, an east coast speciality known for its simple combination of fluffy steamed rice and “gulai” (a curry-like sauce) paired with fried chicken. Other rice dishes such as Nasi Kerabu are also a good choice.

When it comes to places of attraction, Air Panas in Jalan Genting Kelang, Setapak, is a worthy stop. The name “Air Panas” — meaning hot water in Malay — was derived from the area’s well-known natural thermal pools back in the 1960s and 1970s. In those days, the residents in the area gather every morning to do their laundry or bathed there.

Even though the popularity of the hot springs has waned, you can still find a pool in the compound of Resource Springs Apartment. One of Setapak’s hidden “hot” spots, the hot spring is opened daily from 7am to 8pm. The entry fee is RM2.

The Royal Selangor Pewter visitor centre is located in Setapak Jaya. Visitors can join in workshops to craft pewter pieces, walk through the museum to learn about the history and stop the café for a meal.