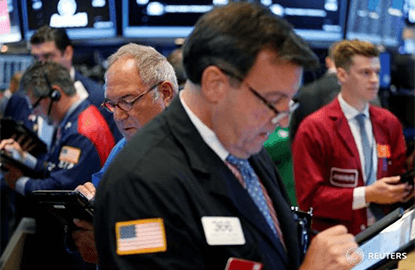 (March 13): US stocks were little changed on Monday as investors preferred to hold their bets ahead of a widely expected interest rate hike by the Federal Reserve later this week.

The Federal Open Market Committee, the central bank's policy-setting board, is expected to lift interest rates by a quarter point to 0.75%-1.00% after a two-day meeting that starts on Tuesday.

All the major S&P 500 sectors were trading within a small range, indicating a subdued appetite on Wall Street.

Materials led the gainers with a mere 0.23% rise, while consumer staples were the biggest losers, but off just 0.14%.

A blowout monthly jobs number on Friday underscored the strength of the US labor market and the ability of the economy to absorb a rate hike.

Traders have placed a 94% bet that Fed Chair Janet Yellen will announce an increase on Wednesday.

Investors will closely watch Yellen's comments for clues on whether the central bank could get more aggressive on rates as the economy shows signs of improvement.

"Right now the markets appears to be in a wait-and-see phase ahead of the Fed decision," said Andre Bakhos, managing director at Janlyn Capital in Bernardsville, New Jersey.

The US dollar, which tends to strengthen as rates climb, was up for the first time in three days, but prices of safe-haven gold also rose due to uncertainty ahead of elections in Europe.

Wall Street ended higher on Friday, but the S&P 500 and the Nasdaq snapped a six-week winning streak as worries about valuations and the lack of detail on President Donald Trump's policy proposals threw a wrinkle in a post-election rally.

"We're at a point where no one wants to walk into the dark room first. Even though a rate hike is a known factor, there is still some uncertainty as to whether the economy is going to do what the market has been betting on," Bakhos said.

Shares of Mobileye jumped nearly 30% to US$61.10 after chipmaker Intel agreed to buy the driverless technology maker for about US$15.3 billion. Intel's shares were off 0.6%.

Nutritional supplements maker Herbalife rose 3.8% to US$54.26 after billionaire investor Carl Icahn raised its stake to 24.57%.

Boeing was the biggest drag on the Dow, down 0.7% following a downgrade by Morgan Stanley.