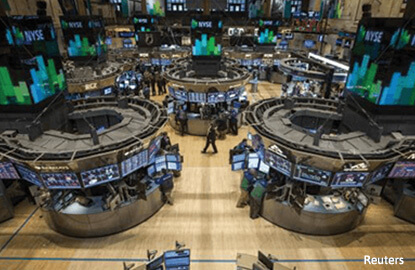 NEW YORK (March 9): US stocks opened little changed on Thursday as investors held off from making big bets ahead of Friday's jobs data that could boost the chances of an interest rate hike next week.

US crude prices pared losses after hitting a four-month low of US$48.79 before the open, following a record rise in inventories.

The S&P 500 energy index was down 0.8 percent, trading at its lowest level since November.

The European Central Bank kept its policy stance unchanged and remained dovish on its outlook ahead of key elections in France and the Netherlands and as a surge in inflation that is expected to be temporary.

Investors are squarely focused on Friday's US nonfarm payrolls report, which is likely to feed into Federal Reserve's decision on interest rates at its meeting on March 14-15.

"I think we are headed for another defensive day, based on climbing yields, falling oil prices and tomorrow's employment number, which will be another confirmation that the Fed may be more aggressive in raising rates than previously expected," said Peter Cardillo, chief market economist at First Standard Financial in New York.

Worries over Wall Street valuations and unusually hawkish comments from Fed officials have led a post-election rally to lose steam in recent days.

The S&P 500 has closed lower for the past three days, setting it up for the first weekly decline in seven weeks.

"The market is priced to perfection, so any disappointment is not going to be well received," Cardillo said.

Thursday also marks the eighth anniversary of the second longest bull market run of the index.

A Labor Department report on Thursday showed the number of Americans applying for unemployment benefits rose to 243,000 last week, but remained below 300,000 for the 105th week, pointing to a healthy labour market.

Seven, of the 11 major S&P sectors were higher, led by a 0.4 percent increase in financials. Almost all big US bank stocks were up about 0.5 percent.

American International Group was up 1.7 percent at US$64.50 after Chief Executive Officer Peter Hancock said he would resign.