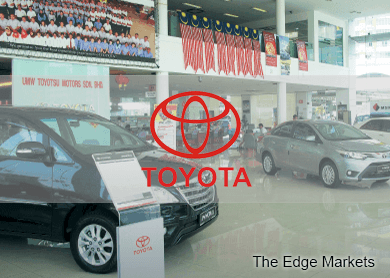 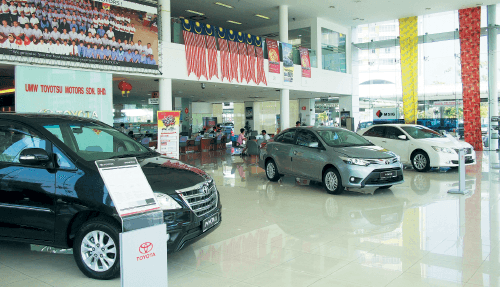 KUALA LUMPUR: The fact that Toyota was beaten down by Honda and Nissan in Malaysia’s January car sales could serve as a wake-up call for its franchise holder UMW Toyota Sdn Bhd, a 51:49 joint venture between conglomerate UMW Holdings Bhd and Toyota Japan.

“This just shows how competitive the Malaysian car market has become. And there’s no space for complacency, even if you are Toyota,” said an automotive industry executive.

Toyota has reigned Malaysia’s non-national car segment for years, with sales usually far ahead of rivals Honda and Nissan. Hence, its sales of only 4,064 units in January 2015, compared to Honda’s 6,522 units and Nissan’s 4,706 units, came as a huge surprise.

Based on data from the Malaysian Automotive Association (MAA), Toyota’s January sales dropped a significant 63.4% month-on-month from December 2014’s 11,092 units, sharper than Honda’s 21.2% drop from 8,082 units in the preceding month and Nissan’s 14% drop from 5,473 units in December last year.

While January sales are usually lower, after the aggressive promotional campaigns to clear stocks in December, the sharp drop in Toyota’s sales in January 2015 to 4,064 units does raise eyebrows, considering that it is less than half of its average monthly sales of 8,503 units in 2014.

The plunging sales depressed Toyota’s market share to 8% in January, while Honda leads the league with 12.9%, followed by Nissan with 9.3%.

Still, industry players warn that Honda is catching up fast and is increasingly becoming a threat to Toyota in the Malaysian market. In 2013, Honda sold just 51,544 units, compared with Toyota’s 91,185 units.

“You have to look at our sales objectively and in totality. I cannot speak for the sales in Malaysia, but our global sales have been growing,” Masanao Tomozoe, head of Toyota’s worldwide marketing operations, told The Edge Financial Daily when asked on Toyota’s dismal January sales in Malaysia at an event last Friday.

According to an industry executive who has access to the detailed sales breakdown in terms of models, the main segment where Toyota lost out to Honda in January could be in the B segment, in which its Vios was outsold by the new Honda City.

Meanwhile, Toyota’s offerings in the pickup, MPV and small MPV segment have been old models such as the Hilux, Innova and Avanza, which have been facelifted several times over instead of being completely new models.

On the perception about the slow launch in models, especially the volume sellers like Hilux, Innova and Avanza, Tomozoe said they have been widely accepted as the “sales figures speak for itself”.

“The process for introducing new models is quite strict and long, but there is something in the pipeline. We have to take into account many things such as customer’s demand, quality and range of products,” he said.

Tomozoe, however, declined to comment on the Toyota’s timeline to introduce new models.

In its latest note, UOB Kay Hian Research expects Toyota’s sales growth to slow in the first half of 2015 as Honda and Mazda are likely to compete for a greater market share, driven by new launches in the first quarter of this year. Mazda is represented by Berjaya Auto Bhd in the local market.

According to TA Securities, UMW Holdings is expecting a 3.5% year-on-year decline in the combined sales volume of both Toyota and Lexus to 100,000 units this year.

Given the lack of attractive new models, Kenanga Research analyst Desmond Chong has also trimmed Toyota’s sales volume forecast by 5% to 98,000 units in 2015.

Similarly, AmResearch foresees slower Toyota sales this year, “given a lack of major volume of model launches and competition”. It added that Toyota’s key launches this year will only include the facelift Camry and the locally-assembled hybrid models in the D-segment.

On the other hand, MIDF Research analyst Annuar Rahman said it is too early to assess the impact of Toyota’s slowing sales on UMW Holdings’ financial performance, but suggested that if sales are further dampened, it could be detrimental to the conglomerate’s performance.

As it is, analysts tracking UMW Holdings (fundamental: 2.2; valuation: 1.2) have cut the group’s earnings forecasts for financial years ending Dec 31, 2015 (FY15), and FY16 by between 4.1% and 13.6% on various factors, including lower revenue assumption for its auto segment.