Wah Seong foresees challenges, RE to emerge as the group's major profit contributor 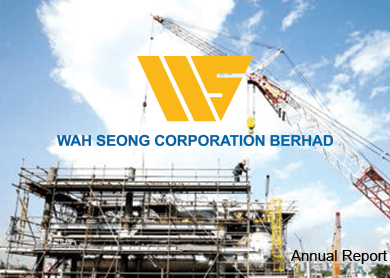 KUALA LUMPUR (June 4): Wah Seong Corp Bhd foresees challenges due to the dip in oil prices and volatile markets, but believes that the fundamentals of the oil and gas (O&G) industry remain intact in the long term.

In a statement today, Wah Seong group chief executive officer and managing director Chan Cheu Leong said its renewable energy (RE) division is expected to remain resilient and will emerge as a major profit contributor to the group.

He added that the group will continue to innovate, increase efficiency and implement prudent cost management activities to ride through the current operating environment.

Chan also said the group is looking into potential strategic investments and partnerships that could generate recurring earnings stream in the long term to supplement the current project-based earnings stream.

Meanwhile, its revenue in the O&G segment increased to RM268.1 million compared with RM223.4 million in 1QFY14 due to higher level of activity.

“The year under review was a record-breaking year for Wasco in terms of net profit attributable to owners of the company whereby for the first time it exceeded RM100 million with a contribution of RM103.5 million,” Chan said.