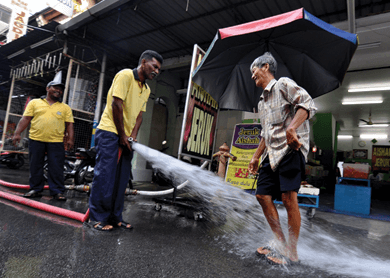 (June 1): The dispute over worker productivity and minimum wages in Malaysia is an indication that Putrajaya's new wage index, part of a strategy under the 11th Malaysia Plan (11MP) to increase livelihoods, especially the bottom 40%, is unlikely to get off the ground, say economists and trade unions.

Unions quote one set of figures to show that productivity has gone up to support their argument that wages are low and should be increased.

On the other side is the employers' federation, whose figures show that productivity levels do not warrant a wage hike.

Economists say that because Putrajaya cannot get these two groups to agree on which figures to use and how to even calculate minimum wage levels, it will not be able to implement a national wage metric.

The 11MP states that the National Wage Index (NWI) will be a guide and a benchmark for employers to set fair and transparent wage levels for workers according to their qualifications, skills and productivity.

The 11MP is Putrajaya’s blueprint to make Malaysia a high-income nation in five years.

The National Wage Index is crucial to raising income levels, particularly since the Najib administration wants to raise the livelihoods of the bottom 40% of Malaysians from RM2,500 to RM5,000 in five years.

The index will be developed by the Human Resource Ministry and other government agencies using data from various sources.

If the debate over Malaysia’s two-year-old minimum wage scheme is anything to go by, Putrajaya will find that it is almost impossible to get workers and bosses to agree on what data should be used to measure “qualifications, skills and productivity”.

But wages only grew 2.1% in the same period, said MTUC secretary-general N. Gopal Kishnam. This is one of the MTUC’s arguments for employers to up wages now.

The Malaysian Employers Federation (MEF) disputes this, saying that the productivity growth does not reflect reality, which is that Malaysian workers are not as productive as their counterparts in the United States or Japan.

Instead of just productivity levels, Shamsudin wants measurements such as purchasing power parity – the relative value of different currencies – to be included in the index.

“Our wages may seem low compared with Singapore but their cost of living is higher than ours,” said Shamsudin.

He admits that there are disagreements between unions, companies and the government over what figures should be used in wage negotiations.

It’s one reason the public debate over wages in other countries is about quantum and percentages, but in Malaysia it is coloured with emotional terms such as “squeezing, victimisation and suppression”.

So if the government wanted to get the NWI off the ground, it has to get everyone to agree on which figures to use and how to interpret those figures, Shamsudin said.

But Dr Lim Kim Hwa of the Penang Institute said too many metrics would overload the index and make it too complicated to use.

“An index might not be comparable as there are other factors not captured by wages, such as working environment, distance from home and work-life balance,” said Lim, who heads Penang Institute’s Economics section.

The scepticism about the wage index is also fuelled by the fact that Putrajaya does not effectively use the tools it already has to negotiate wages, such as the National Wages Consultative Council.

“According to the guidelines on the Implementation of the Minimum Wages Order 2012, the minimum wage levels must be revised every two years. That means it is up for a review this year.”

Gopal Kishnam said that did not happen.

On May 1, Prime Minister Datuk Seri Najib Razak said the minimum wage level would not be reviewed this year.

The trust deficit between workers, government and companies is also deepened when Putrajaya appears to turn a blind eye to union-busting by companies.

According to economist Dr Muhammad Abdul Khalid, a co-author of the Malaysian Human Development Report 2013, unions and collective bargaining were effective tools for companies and workers to set fair wage increases.

Lim said in Germany, the government did not interfere in wage negotiations between employers and employees.

But that only worked when there was strong government support for workers' rights, said  Gopal Kishnam.

“(Last year) KTMB, a government-linked company sacked 97 unionised workers because they protested against the management,” he said.

Even though all of them have since got their jobs back, Gopal Kishnam said the episode effectively questioned just how serious the government was about workers’ rights and interests. – The Malaysian Insider