Vivocom to meet forecast of RM3b worth of contracts in 2016, says CIMB Research 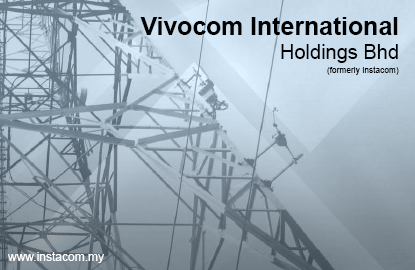 KUALA LUMPUR (March 16): CIMB IB Research has maintained its “Add” rating on Vivocom International Holdings Bhd at 26 sen with an unchanged target price of 67 sen and said the biggest surprise was the RM1.5 billion potential new order wins in the next six months.

In a note yesterday, the research house said Vivocom is likely to complete the balance 5.5% private placement by mid-2016.

“Vivocom is finalising the award and contract values for RM1.5 billion worth of LOIs over the next six months.

“This was a big positive surprise, in our view, as combined with RM600 million in new contract wins announced so far, and assuming it secures RM800 million-RM1.6 billion from Gemas-JB double tracking project, our forecast of RM3 billion worth of contract wins in 2016 should be met or even surpassed,” it said.

“We retain our EPS forecasts, SOP-based target price and Add rating. We diluted our EPS forecasts in our earlier report for the 10% private placement. Potential re-rating catalysts are contract win announcements and strong 1Q16 results,” it said.