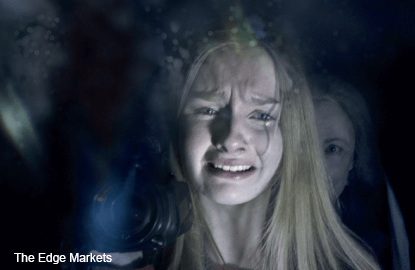 After a series of films dwelling in various topics such as aliens, a dystopian human future and fairy tales, M Night Shyamalan has gone back to his roots — the horror genre. Sixteen years after his thrilling blockbuster The Sixth Sense hit the big screens and changed our lives forever with a single line, “I see dead people”, Shyamalan has failed to deliver anything of equal calibre. In fact, 2013’s After Earth was such a dismal failure that main star Will Smith himself admitted regretting making the movie and dragging his son along for the ride.

The trailer of The Visit is promising — two kids visiting their estranged grandparents whom they’ve never met before slowly start noticing how creepy their “new” family members actually are. The movie starts off slowly: Their mother goes away on a cruise with her new boyfriend, and the kids take a train to visit grandma and grandpa. However, the plot starts to thicken when the grandmother starts doing weird things in the middle of the night — explained by their grandfather as a mental illness called sundowning, which affects the elderly.

Things start to get weirder and weirder, until one day, the kids can stand it no more and contact their mother to tell her what has been happening. That’s when everything starts unravelling. One can see that Shyamalan was going with the sort of twist that made The Sixth Sense such a great movie, but this one falls short because once the viewers start thinking through things, numerous plot holes start to appear, and the great “reveal” begins to fall apart.

The scares are pretty good, in that it is a nice change to not have to look at blood, gore and cheap ghostly effects for once. However, the film moves at such a slow pace that one soon starts getting fidgety and impatient waiting for something — anything — to happen already.

Perhaps the one redeeming quality of The Visit is its talented cast, from aspiring moviemaker Becca (Olivia DeJonge) and rapper-in-training Tyler (Ed Oxenbould) to their crazy grandparents played by Deanna Dunagan and Peter McRobbie. The kids do a respectable job with their characters, putting in just the right amount of worry laced with fear, while Dunagan and McRobbie appear to be convincingly crazy.

One could argue that Shyamalan probably did the best he could with a limited premise, and that there are only so many ways such a story could have ended without bringing in the dreaded aliens. It is a rather good try on his part — there are nods here and there to other scary movies (somehow, the fairy tale Hansel and Gretel ended up being referenced several times, too) and a handful of genuinely scary scenes.

But another The Sixth Sense, The Visit definitely is not. Good try, Shyamalan, but perhaps try again. Could the brilliance of The Sixth Sense be just a one-hit wonder? Only time will tell.