Visions of a digital future: 90s cinema and virtual reality

THE book inspiring Steven Spielberg’s latest directorial commitment, Ready Player One, is crammed full of references to the 1980s — but ‘90s cinema was just as obsessed with exploring crossovers between simulated reality and the real world. We pick six movies with literary links that are emblematic of the time, and only mention The Matrix twice. 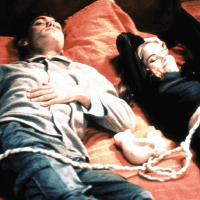 Existenz (1999)
While this David Cronenberg film is not based on a pre-existing novel, sci-fi writer Christopher Priest was recruited to pen a tie-in for the film’s release. Jennifer Jason Leigh and Jude Law were the two fugitives in a future world where game consoles have become coveted blobs of biomass. As in Christopher Nolan’s later Inception, it becomes unclear whether the main characters are part of a simulated reality or have successfully escaped it. 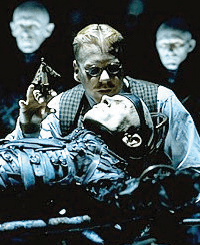 Dark City (1998)
John Murdoch (Rufus Sewell) is this film’s lead amnesiac, hunted by police while trapped inside a sunless city. Immune from regular resets that adjust city’s layout and populace, he is consumed with finding a seaside hometown, aided by pre-24 Kiefer Sutherland. Similarities abound between this and Strugatsky Brothers’ novel Doomed City.

The Thirteenth Floor (1999)
Deservedly eclipsed by The Matrix, this adaptation of Daniel F Galouye’s Simulacron-3 revolves around a virtual reality firm that has successfully developed a complete simulation of 1937 LA, complete with AI inhabitants who think they’re real. Then the firm’s CEO is murdered. Whodunnit?

Total Recall (1990, 2012)
Based on Philip K Dick’s We Can Remember It For You Wholesale with Arnold Schwarzenegger as Quaid, a builder who becomes consumed with dreams of Mars. A botched virtual tourist trip causes him to conclude that he’s a secret agent who must overthrow Mars’s governor; Colin Farrell starred in the remake opposite Bryan Cranston.

The Lawnmower Man (1992)
Only very loosely based on Stephen King’s story and a CGI marvel upon release. The titular groundskeeper found himself the subject of a virtual reality accelerated learning programme that, no thanks to shadowy governmental interference, turns him into a powerful but dangerous genius.

Johnny Mnemonic (1995)
Keanu Reeves stars in an adaptation of William Gibson’s book, in which the title character has dumped his childhood memories in order to become a human data storage device. He wants out, but the Yakuza have other plans. Poor execution — worse than The Thirteenth Floor — made Reeves’s inspired casting in The Matrix even more remarkable. — AFP