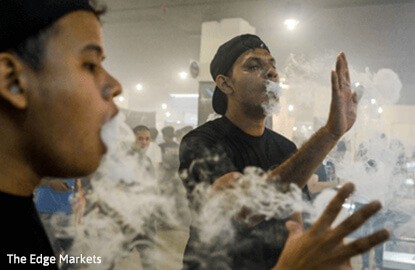 OPERATORS of outlets selling vaping products are open to the idea of the government regulating the industry as that would allow more investments, especially in the manufacturing of the mods (vaping devices) and e-liquids.

According to Samsul Kamal Ariffin, president of the Malaysian Organisation of Vape Entities (MOVE), the vaping industry generated an estimated revenue of US$500 million at its peak in 2014 and 2015 — a decent number for an industry whose products are manufactured in bachelor pads.

“We want it to be regulated. We don’t want vape to be cool or attractive to children. We want to make it a medium for people to quit smoking,” Samsul tells The Edge.

“Once it is regulated, what we have proposed to the government is that all bottles with colourful labels will have to go.”

There has been much debate on whether to regulate or ban vaping in the country since the culture gained mainstream acceptance over three years ago. Due to the absence of federal laws, some states have banned vaping, both for health and religious reasons.

Advocates of vaping, who say it is safer and healthier than smoking, have been trying to resist a blanket ban. They feel it is unfair, especially when cigarettes and other tobacco products are legal and widely available.

Due to the ambiguity in the status of vaping in this country, several vape stores have been raided by the Ministry of Health (MoH) and some of their items confiscated.

At present, anyone who wants to import the mods must declare the items as electronic devices and pay import taxes accordingly. Imported e-liquid has been declared a food additive and sometimes as aromatherapy but this does not depict the true nature of the product, which is nicotine-infused liquid. No taxes have to be paid on locally made e-liquids and mods as long as their sales do not exceed RM500,000 per year, which qualifies the stores for the Goods and Services Tax.

The government is missing a lot of revenue from the vaping industry and it might have missed the window to tax the industry at its peak. Samsul says due to MoH’s raids on vaping premises, almost 50% of the stores have closed down.

“After nationwide KKM (Kementerian Kesihatan Malaysia) raids, there was a lot of uncertainty, which led to panic selling. Small players slashed their prices, which in turn affected most major retail outlets. More than half the vape shops closed down and demand slumped as well.”

Will the vaping industry see the same kind of money again? Samsul, who holds a bachelor’s degree in economics from the University of London, says there will be a market correction once the government regulates the industry.

The industry wants regulation so that the nicotine content of the e-liquids is standardised and the mods are of high quality, he adds.

“The way we look at it, it is about saving people’s lives and helping people quit smoking. It will save the country billions of ringgit in medical bills. In an ideal world, we want everyone to quit smoking and vaping but we know this is not going to happen.

“So, we should regulate the industry. Since there is no control now, what’s there to stop a child from coming into the shop and buying e-liquid? There is not even a legal definition for vaping. We want safe products, products that have been tested. We want the vaping community to live in an environment that is regulated — where we can vape, what the minimum age to vape is and so on,” says Samsul.

In the meantime, the government has been increasing the excise duty on cigarettes with the latest hike being a whopping 46% in November last year. The resulting high cigarette prices forced British American Tobacco (M) Bhd to close its plant in Petaling Jaya.

Will more expensive cigarettes make smokers migrate to vaping? Samsul does not think so. He says it is harder for one, especially a teenager, to take up vaping because the upfront cost of the mods is anywhere between a few hundred and a few thousand ringgit.

Also, the addictive nature of cigarettes means smokers’ sensitivity to price hikes is low. Cigarette prices have risen more than 50% over the last decade but consumption is still steady.

“High cigarette prices will not see a big migration to vaping. What will happen is that smokers will migrate to illicit cigarettes,” says Samsul.

As vaping is a means to quit smoking — or at least that is how MOVE sees it — the government should increase the legal age for it to above 18, says Samsul.

“People who vape want to be healthy. I’m not discounting the fact that there are people who vape because it is the latest trend but what we at MOVE are advocating is to inform the public that vaping shouldn’t be a trend or culture but an aid to stop smoking,” he adds.

While Samsul is pushing for the notion that people should not vape because it is trendy to do so, his shop, Ed Vape, in Glenmarie, Shah Alam, looks like a boutique.

If the government were to regulate vaping, shouldn’t its products be available only at hospitals and pharmacists instead of vape parlours?

“Why not? But if cigarettes, which have proved detrimental to health, can be sold at stores, why restrict vape to just hospitals and pharmacists?” asks Samsul.