A SNAG in the current value of the power assets that 1Malaysia Development Bhd (1MDB) bought from T Ananda Krishnan for RM8.5 billion in 2012 is a reason behind the delay in its settlement of a RM2.0 billion debt owed to a group of local banks.

Of the RM6.17 billion, RM670 million was paid off while the remaining RM5.5 billion was later restructured into two term loans — a RM3.5 billion 10-year loan and a RM2.0 billion tranche that was to have been paid on Nov 30 last year. The main lenders, Malayan Banking Bhd and RHB Bank Bhd, have since given PIH two extensions — Dec 30 last year and the end of this month — to pay up.

The RM3.5 billion loan was secured against the cash flow of PESB, which owns and operates the power plants, and PIH has to settle it in 20 half-yearly payments of RM175 million each.

As for the RM2.0 billion, the banks lent the money on a commitment given by Tanjong Plc that it would subscribe for RM2.0 billion worth of new shares in PIH should the need arise, in order for the latter to settle the loan.

Sources say Tanjong’s pledge was only an “insurance” as the debt was supposed to be settled via the proceeds from the listing of 1MDB’s energy assets. However, the listing has been delayed by various problems.

Thus, PIH’s only recourse was to call in Tanjong’s RM2.0 billion commitment. Unfortunately, that has also run into the issue of how much PIH is worth.

Sources say PIH cannot be valued at RM8.5 billion, which was the price it paid Ananda for his power assets. This is because since the acquisition, it has accumulated a debt of RM3.5 billion, there has been a goodwill impairment on the assets of over RM1 billion and the life of the power purchasing agreement has been shortened by two years.

On a fair value basis, PIH could be worth less than RM4.0 billion today. This means that if Tanjong subscribed for RM2.0 billion worth of new PIH shares, it would end up with majority control of PIH, which effectively means 1MDB losing control of the power assets it bought just three years ago. (1MDB also bought the power assets of Genting for RM2.3 billion in the same year.)

Sources say 1MDB and PIH have got into this sticky situation because their cash flow is just not enough to service their debts and they have not been able to create value from the power assets they bought to raise money from a flotation.

“They are in a corner and are depending on the goodwill of the banks,” says a source. “And they can’t [take the RM2.0 billion from Tanjong and] lose control of PIH.”

And despite announcing that it had just redeemed US$1.0 billion (RM3.5 billion) from Cayman Islands (the remainder of the US$2.318 billion that had been parked there since 2011), 1MDB would not commit to using the money to settle the RM2.0 billion loan.

In reply to a question posed by The Edge (see Q&A), a 1MDB spokesperson says: “1MDB intends to use, over time and as appropriate, the funds redeemed for a variety of corporate purposes including but not limited to capital expenditure and development projects, as well as working capital and the settlement of various financial commitments. In particular, 1MDB intends to direct some of these funds towards development work at Tun Razak Exchange, where the company has begun offering development land, following significant infrastructure and construction work at the site recently.”

Sources say another plan — possibly a new party stepping into the picture — has to be put in place to raise the RM2.0 billion needed by PIH to pay the banks while enabling it to retain control of PESB. 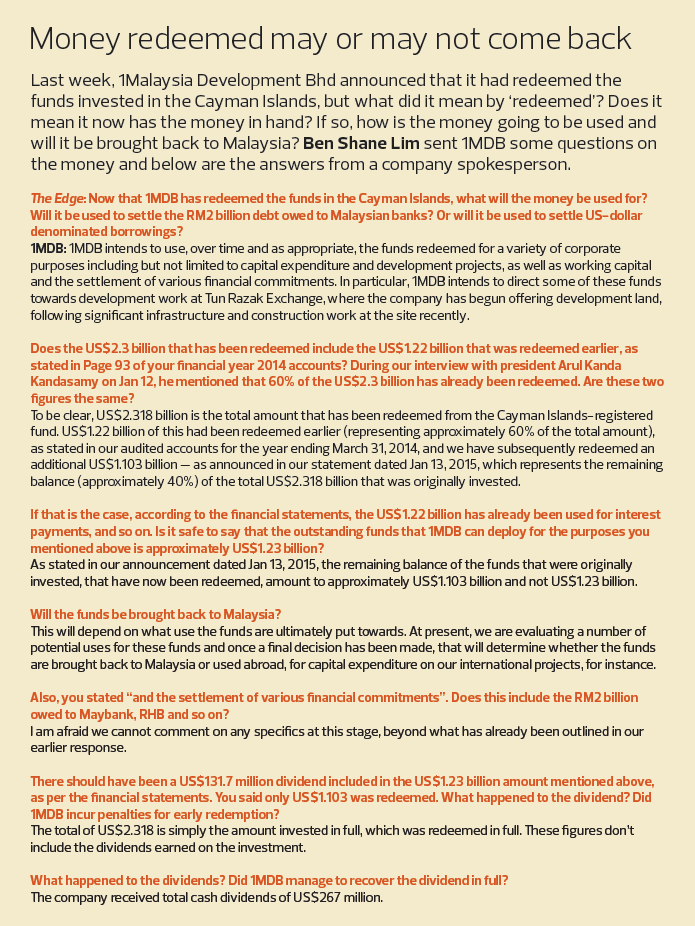