Utusan cashes out stake in property development unit for RM48m 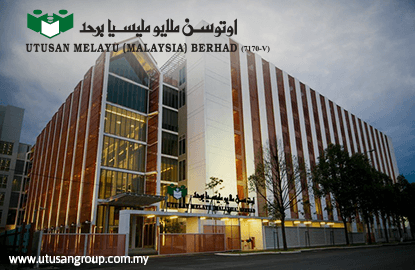 In a filing with Bursa Malaysia today, the loss-making publishing company said its unit Utusan Land Sdn Bhd had entered into a share sale agreement with MHA59 for the proposed disposal last Thursday (Dec 17).

The deal involves the disposal of Utusan Land's entire 20% equity interest or 100,000 shares in Maqamad to MHA59.

Utusan said the original cost of investment in Maqamad was RM100,000 incurred in April 2015.

Maqamad is principally involved in property development and general trading, and is actively seeking to increase its land bank for future business expansion, said Utusan.

MHA59 is a Subang-based private company, principally involved in the leasing of intellectual property and similar products (except copyrighted works), business management consultancy services and the development of building projects for its own operation.

"The proceeds are expected to be utilised for Utusan group's day-to-day operation to support the existing business operations, which include payment of trade and other payables within 12 months," Utusan said.

Utusan said the disposal is expected to result in an improvement to its earnings by approximately RM48 million for the financial year ending Dec 31, 2015, and contribute positively to its earnings per share.

The publishing company, which is 49.77%-owned by Umno and publishes the Utusan Malaysia and Kosmo! newspapers, has been loss making since 2012.

Shares in Utusan closed unchanged at 57 sen today, for a market capitalisation of RM63.12 million.