CAN the principles of feng shui help in wealth creation? Some people believe that they can, while others do not. To usher in the Year of the Goat, Personal Wealth talks to several businesspeople who believe that feng shui has played a part in their success. Here are the stories. 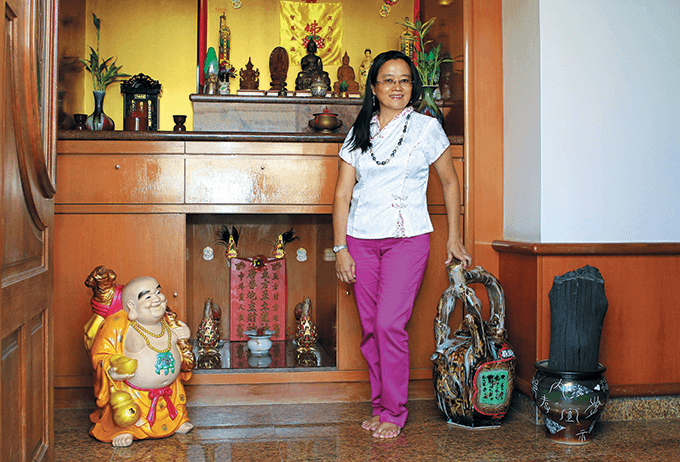 To welcome the Year of the Wood Goat, feng shui believers might have already renovated their house or office, or rearranged objects and furniture, to harness the chi, or good energy or luck, in their homes or workplace. Their objective is simple: to ensure their wealth grows, health is protected, harmony is maintained and misfortunes are warded off in the coming year.

Although the first day of the Lunar New Year falls on Feb 19, the feng shui year begins on Feb 4, according to experts in this 6,000-year-old Chinese practice.

In Chinese, feng literally means wind and shui is water. Simply put, feng shui is the art of placing objects in relation to one’s house and surroundings that is aimed at achieving harmony with nature. This covers landscaping, furniture, fittings and burial site orientation.

According to the experts, the right manipulation of feng shui can bring luck or buffer the potential hard knocks coming our way. Factors that control our luck can be enhanced with the principles of feng shui.

And if our luck is bad, these principles can help channel good natural energies and ward off bad ones in our environment.

“Many people say fate cannot be altered. This is not true. I say you can change your luck and karma with feng shui, otherwise why should we pray?” says feng shui expert Lillian Too at a packed seminar on Jan 11.

“Previously, fortune tellers told me I would die at 68. But I am still alive. This is because I have worked hard to change my feng shui and destiny,” she adds. Too turned 70 that day.

The feng shui grandmaster, a prominent banker in the 1980s while working for Hong Leong Group, left the corporate world to study feng shui after graduating from Harvard University with an MBA. According to Too, she passed with flying colours after rearranging the position of her bed.

The enthralling speaker, credited for popularising feng shui in the West and among those educated in the English language, is not short of local and foreign followers. Sitting in the huge hall where she gave her annual feng shui predictions were many businessmen and professionals.

And just outside the hall, the place was turned into an extravaganza of colourful feng shui enhancers and cures, ranging from expensive “chest wallets”, crystal “wealth ships” and protective scarfs, to affordable anti-burglary key chains, lucky amulets and money coins — all creations of Too’s World of Feng Shui.

Her feng shui merchandise caters for people from all walks of life. “I am not keen on making a lot of money. If you can prosper and benefit from my feng shui cures, I am happy,” she declares to her audience.

Indeed, symbolism is highly important in the practice of feng shui. Auspicious motifs, giant statues of protective celestial creatures and lucky symbols can be seen in many houses and office buildings.

Businessman Datuk Sia Hok Kiang, who follows Too’s lectures regularly, believes in the use of symbols. This well-known geologist, who owns copper mines in Australia, has placed a drum under a plaque with Chinese characters in his family hall to ensure that his reputation rings loud and far.

“This feng shui set up is good for reputation enhancement. I set it up two years ago, and the result has been fascinating!” says the chairman of the Malaco Group.

Sia, 60, who had rejected feng shui in his youth as some of the doctrines appeared to defy scientific theories, says he accepted the effectiveness of feng shui practices 10 years ago. For this year, he has renovated his house to face his “feng shui flying star”, which presumably changes with time and external factors.

“The first thing I did to turn around my fortunes was to remove afflicted things in my house — sharp, knife-like ornaments were replaced with harmonious rounded ceilings,” he tells Personal Wealth. 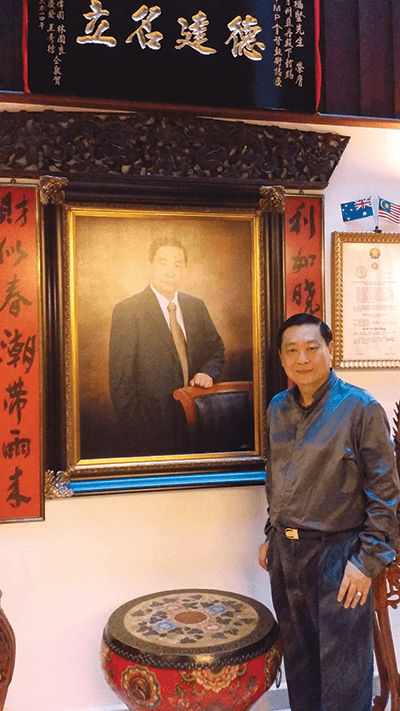 “My life experiences have shown that there are feng shui phenomena not measurable by scientific methods yet appear to yield predictable outcomes. Feng shui practice is the art of knowing the position of unseen forces, enhancing the beneficial ones and reducing or removing the destructive elements.

“I would practise annual feng shui adjustments to enhance the beneficial sectors and to reduce or avoid the conflicted sectors. Enhancement and protection against afflicted losses is important regardless of one’s status.”

Businesswoman Lillian Goh Kui Lian, who studied I Ching and feng shui in the early 1990s, says her house in Wangsa Maju, Kuala Lumpur, and factory in Balakong, Selangor, have been designed according to feng shui principles.

“From the entrance of my house to the inside, there is a gradual stepping up of the floor. This will bring about a rise in position or status. At the entrance, I have placed charcoal logs to symbolise black gold.

And inside the house, there is free circulation of fresh air,” Goh says as she ushers us (this writer and a photographer) into her naturally cool and breezy bungalow.

She points out that she has deliberately let the north side of her house face Genting Highlands, while the west side faces KLCC. “We will always get wealth luck from Genting and KLCC,” she quips.

Goh, 50, says life has been harmonious and the business she set up with her husband has done well since building her new house and factory in 2001.

The Kendek Group of Companies, which supplies machinery and equipment to major glove makers, is now one of the largest players in this segment. Also, all of her property investments have been profitable.

Madam Lau, a business woman, is a regular participant of Too’s seminars. She says feng shui has helped her to prosper in property investments. As she often goes to the bank, she wears an anti-burglary amulet, which is sold by Too’s World of Feng Shui.

“I have been coming here for 10 years. I follow her advice on property investment and I have made quite a fair bit. But I am shy to tell people this as they may laugh at me,” says Lau, who hails from Kuantan, Pahang.

While many tycoons decline to be interviewed on their feng shui practices, property developer Tan Sri Lee Kim Yew is very open about his beliefs. He says the feng shui of his resort-style bungalow, which faces a crystal-clear lake amid lush greenery and chirping birds in Sungai Besi, is fantastic.

Lee, who controls Country Heights Bhd, tells Personal Wealth that he started 2015 by copying some of the philosophical teachings in the I Ching, the origin of feng shui. “Reading the I Ching will help people realise and understand how good luck can be achieved,” he says.

Tycoons known for practising feng shui include the late Tan Sri Lim Goh Tong of the Genting Group. Too advises gamblers heading to the casino in Genting Highlands not to enter by the main entrance, but to walk in through the garage. “This is because the chi or luck has been absorbed by the operator.”

The late Tan Sri Teo Soo Cheng of the See Hoy Chan Group was another ardent believer of feng shui. He once hired the late grandmaster Yap Cheng Hai to audit the feng shui of the first phase of One Utama.

In recent years, financial institutions and companies have brought in feng shui masters to give talks to their staff and customers before the new year begins. Banks that have done so include CIMB and Citibank.

Increasingly, more local property developers are hiring the services of feng shui experts to audit their project designs before they begin construction. Feng shui is also becoming very popular in the West. There are many feng shui consultants in the US, the UK, Canada and Australia giving advice on home design using feng shui principles, and business is booming.

In the West, the most widely known feng shui believer is American billionaire Donald Trump. He hired Master Pun-Yin to incorporate the principles of feng shui into the Trump Tower in New York.

Can feng shui cure all?

As there are many schools of thought in feng shui, it is important to choose the right one, say the experts. Some believers have spent thousands and millions of ringgit on feng shui advice, but failed to get it right.

While some feng shui consultants focus on major and costly home and office renovations for feng shui cures, others advise on the rearrangement of furniture and the display of some money motifs and gadgets. But it is obvious that feng shui is not a “cure all”.

“Feng shui is not black magic. It cannot amass wealth for people. If a person decides to be complacent or starts to gamble away his wealth after his success, no feng shui in the world can help him,” states Sia.

Goh, whose feng shui practices have never failed her, agrees. “To achieve success, you have to work hard. Feng shui can help, but it is not a complete cure. My husband and I worked very hard in our early years to build up our business.

“Feng shui has provided us the support. But without hard work, we will not be where we are,” says Goh in her comfortable family hall.

“If you are lazy and irresponsible, there is no way feng shui can help you,” she adds emphatically.

Philippine Airlines chairman Lucio Tan held a similar view a few years ago. The self-made tycoon’s sprawling residence in Quezon City is located in an area reputed to be “the head of the dragon” in the feng shui world.

Manila’s leading tycoon reportedly said, “I believe in good luck, of course. But my struggles in business showed me that the best ways to achieve luck and success are still good old-fashioned hard work, thriftiness and non-stop education.”

This article first appeared in Personal Wealth, a section of The Edge Malaysia, on February 9 - 15, 2015.