U.S.-China confrontation risk is highest in the South China Sea 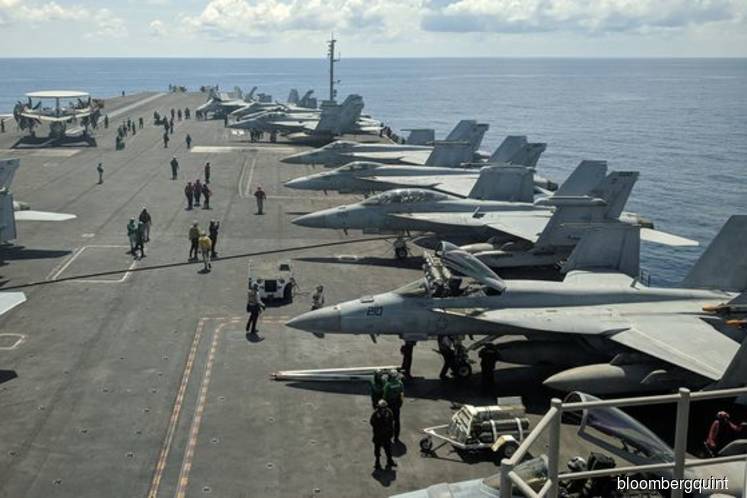 SINGAPORE (May 28) : As China and the U.S. trade barbs over everything from trade to Covid-19 to Hong Kong, the two powers are at greater risk of careering into physical confrontation. And nowhere are their warships and fighter jets coming as close to each other, with as much frequency, as the South China Sea.

A military conflict would probably be devastating for both. There are no signs that either side actually wants one. Still, in times of high tension, miscalculations can have unintended consequences.

In the first four months of the year the U.S. Navy conducted four freedom of navigation operations, known as FONOPS, in the South China Sea, which is criss-crossed by competing claims by nations including China, the Philippines, Vietnam and Malaysia. That puts it on track to surpass last year’s total of eight. At the same time, as China emerged from the worst of the coronavirus outbreak, its Navy steamed back out of port in Hainan and resumed drills in the area.

It’s a high-stakes game of cat and mouse between the militaries of two countries with a history of near-misses. With President Donald Trump months from an election, and President Xi Jinping rattling nationalistic cages at home to distract from a wounded economy, the mood is less conducive to the careful diplomacy needed to defuse a standoff at sea. Xi used an address Tuesday to delegates at the National People’s Congress in Beijing to again warn the military to strengthen war preparations.

“While a premeditated armed conflict between China and the U.S. is a remote possibility, we see their military assets operating in greater regularity and at higher intensity in the same maritime domain,” said Collin Koh Swee Lean, a research fellow at Singapore’s S. Rajaratnam School of International Studies. “The interactions of these rival assets in the area would create chances of miscalculation and misjudgment leading to inadvertent or accidental use of force, which is thus potentially incendiary and could result in escalation. This is a risk we can’t discount.”

The U.S. and China have been dancing around each other in the South China Sea for years. While the U.S. is not a territorial claimant, the waters are a key thoroughfare for global shipping and trade, rich in fish and with large but mostly unproven energy deposits. The U.S. has supported some smaller states against China’s increased military presence in the area, including its move to build airstrips and land strategic hardware on rocky outcrops and low-lying reefs. Beijing has also in recent times deployed coast-guard vessels decked out with the same level of armory as a standard navy ship to escort its fishing fleets.

Defense Secretary Mark Esper spoke in December of his intention to prioritise the deployment of U.S. forces to the Asia-Pacific region from other areas in the face of growing competition with China. Covid-19 saw exercises scaled down or canceled and the sidelining of aircraft carrier U.S.S. Theodore Roosevelt in Guam after hundreds of crew members tested positive for the disease (it has now returned to sea). Still, there remain flashpoints.

Deputy assistant secretary of defense for Southeast Asia, Reed Werner, last week warned of a “very worrisome” trendline during an interview with Fox News, accusing China of the “harassment” of the Arleigh Burke-class destroyer U.S.S. Mustin while it patrolled the South China Sea. He also cited at least nine instances of Chinese fighter jets doing the same to U.S. reconnaissance aircraft.

In an effort to bolster its defense capacity in airspace over the disputed waters, China’s Defense Ministry has said it would formally declare an air defense identification zone after years of attempting — mostly unsuccessfully — to force planes from other nations flying in the area to change their course. It’s unclear, though, when this might actually happen.

The U.S. Navy also recently engaged in a standoff with Chinese vessels after twice sending warships on presence operations off the coast of Malaysia, where Chinese ships were shadowing a Malaysian state-contracted drill ship exploring two potentially lucrative energy blocks claimed by both countries. 7th Fleet Commander Vice Admiral Bill Merz said in a statement in mid-May that the U.S. had done so in support of “allies and partners in the lawful pursuit of their economic interests.”

China’s foreign ministry said at the time its survey ship was “conducting normal activities in waters under Chinese jurisdiction” and called the situation “basically stable.” On Sunday, Foreign Minister Wang Yi accused “non-regional countries” of “flexing their muscles” in an effort to sow discord between China and Southeast Asian nations.

Security experts familiar with the Malaysian government’s thinking said officials in Kuala Lumpur expressed concern to the U.S. that its presence would only serve to escalate the matter. A spokeswoman for Malaysia’s Foreign Ministry declined to comment. The U.S. was “clearly sending a signal,” said Bonnie Glaser, director of the China Power Project at the Center for Strategic and International Studies.

#USSGabrielleGiffords operated in the southern South China Sea near the drillship #WestCapella on Tuesday, the second time in the past week a #USNavy LCS patrolled there supporting freedom of navigation and overflight: — U.S. Pacific Fleet (@USPacificFleet) May 13, 2020

The U.S. Air Force sent two B-1B Lancers on a more than 30-hour round-trip sortie from South Dakota to conduct operations over the South China Sea on April 29, even as it reportedly ended its longtime practice of maintaining a continuous bomber presence in Guam. In an emailed statement, the Air Force said it had “transitioned” to an approach that lets bombers take off from a broader array of overseas locations, making them “operationally unpredictable.”

“I think part of the uptick in U.S. military operations is to make sure that the Chinese don’t miscalculate and think that the United States is unprepared because of the fact that the Theodore Roosevelt has been out of commission sitting in Guam,” said Glaser. “But I also think that it is in response to the increased op-temp by the Chinese.”

There are mechanisms in place to avoid a mishap between the Chinese and U.S. Navy. China, the U.S. and 19 other countries have joined a Code for Unplanned Encounters at Sea with a standardized protocol of safety procedures. U.S. Navy officials have said they’ve been communicating more closely with the People’s Liberation Army, and that CUES is working.

Still, it does not cover the coast guard or fishing militias, which are increasingly used by China to assert its claims to more than 80% of the South China Sea.

The “problem is that the incidents we observe in the region aren’t ‘unplanned’ -- in the lead up to these close encounters the rival naval forces at sea already knew each other to be present and they shadow and monitor each other underway, at visual range,” said Koh from the RSIS in Singapore.

There have been tense moments before. In 2001, a Chinese fighter jet collided with a U.S. surveillance plane in international airspace, forcing the U.S. aircraft to make an emergency landing in China and the Chinese jet to crash. In 2016, a Chinese naval ship seized a U.S. Navy underwater research drone in international waters, prompting Trump to accuse China of theft. It was later returned.

Most recently, China’s Defense Ministry said its navy followed and expelled a U.S. guided missile destroyer on April 28, saying it had violated Chinese territory. Under Xi’s watch China has refocused its military from land-based troops to air and sea capability. It commissioned more than two dozen new ships in 2016 and 2017, and said last October the development of a second home-made aircraft carrier was making “steady progress” after floating its first in 2017. In just 15 years, China has doubled its supply of launchers and built weapons that have extended the reach of its conventional warheads to cover most of America’s Western Pacific bases.

“I do worry about this situation,” said Zheng Yongnian, director of the East Asian Institute at the National University of Singapore. “The U.S.-China relationship is in free fall now, pushed by the hardliners from both sides. No doubt, the new Cold War between the two is escalating, and now people begin to worry about the possibility of a hot war, a regional one.”

“Even worse, there is no force to cool them down,” he said. “Nations in Southeast Asia are too small compared to the two great powers.”

The renewed tensions put those smaller Southeast Asian states in a tight spot. Singapore, while not a South China Sea claimant, has long warned against forcing countries to choose a side.

Prime Minister Nguyen Xuan Phuc told Vietnam’s National Assembly on May 20 the situation in the South China Sea was becoming “more complicated.” Chinese state news agency Xinhua reported this month that Beijing would “strictly enforce” an annual fishing ban that started on May 1, prompting Vietnam to reject what it called a “unilateral decision.” The Philippines meanwhile has filed diplomatic protests against China’s creation of two new districts in an attempt to administer islands in the waters, its top envoy said.

“Southeast Asia finds itself increasingly in a hardened new Cold War,” said Paul Chambers, special adviser on international affairs at Naresuan University’s Center of Asean Community Studies in Thailand. “The tip of that iceberg is the South China Sea.”