US$650,000 Porsche you will happily drive into ditch 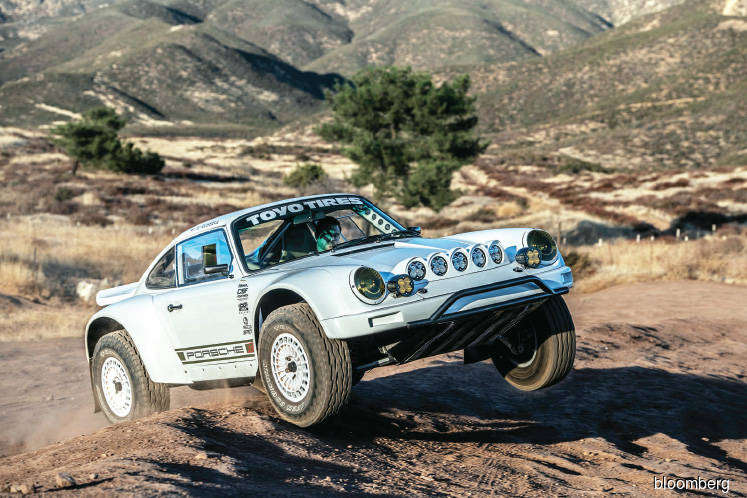 The Baja 911 built by Russell is based on a Porsche 964 Cabriolet. Photos by Bloomberg

You may not realise it, but a lot of people want a Porsche that can go off-road.

In November, a builder named TJ Russell unveiled a gleaming white Porsche 911 at the Specialty Equipment Market Association (Sema) show in Las Vegas, California, the US. The car, known as the Baja 911, had the following: Wide, flared fenders; huge, knobby tyres; a roll cage; and nine headlights.

It looked like the type of desert car Steve McQueen would have dreamed about, like what Porsche would have made had it continued its rally endeavours well past the halcyon years when it raced 6,200 miles (9,978km) from Paris to Dakar in a legendary car called the 953.

During the Sema debut, the Baja 911 was swarmed for hours with the international automotive press, industry insiders, well-known builders and fanboys taking photos, making videos and generally drooling over the hand-craftsmanship that Russell completed, alone, over the course of more than a year. Since then, the car has appeared in dozens of dust-caked glamour shots, set with the sun illuminating its aggressive stance while it dances over boulders and through sand. It is plastered all over car blogs and Instagram feeds, and in YouTube videos and trade magazines.

But the Baja 911 is more than just a pretty face. It has more than a foot (30.48cm) of ground clearance, a unique suspension system of cushy and nimble shocks, a reinforced chassis, and a purpose-built 3.8-litre, 365-horsepower (hp) engine paired with a specialised five-speed transmission engineered to perform for thousands of miles, day in and day out, in 100°F (37.78°C)-plus heat.

It has been sprayed with a layer of sound deadening and ceramic coating to insulate the cabin from noise and heat; the interior metal surfaces are welded and sealed from the front fuel supply and rear engine bay in order to guard against collision and water damage; and the carbon seats in the rear fold down to reveal a locking storage box for spare parts and tools.

The whole car weighs just 2,800 pounds (1,270kg) — 400 pounds less than a stock 911 fresh from the Porsche factory. It is a featherweight suited for navigating the punishing sand, boulders and heat of Mexico’s Baja Peninsula — the source of its name.

At US$650,000 (RM2.67 million), the Baja 911 represents the top 1% of a larger group of cars known as Baja, Safari or rally cars, so named to evoke the type of driving they do. They are designed to race in glamorous and gritty off-road contests such as the East African Safari Classic Rally, the Carrera Panamerica in Mexico, the Peking to Paris Motor Challenge, or the Rally Caminos del Inca in Peru. In the simplest form, the terms — used interchangeably — refer to any vehicles modified to perform off paved roads.

“Rallies are exhilarating like you can’t believe,” said Jeff Gamroth who builds rally-ready Porsches at his company Rothsport Racing in Sherwood, Oregon. In 2018, a Gamroth car won the Norra Mexican 1000 off-road race. It was the first time in history a Porsche had ever won a 1,000-mile-plus desert race. “There’s times you’re going 100 miles an hour through the forest, with trees going sideways on either sides. Or you’ll be on a dry lake bed for one minute, driving flat-out 110mph (177.03kph), and then get onto silt beds with talc powder dirt so fine it is like water.”

Rally cars have a long history. The Baja Bug (a modified Volkswagen Beetle) and the Meyers Manx, a dune buggy-looking tub with wheels, were popular in Southern California in the 1960s. The Manx, in particular, earned international acclaim in several movies, including The Thomas Crown Affair. Enthusiasts would modify the bodies of stock vehicles to make them suitable for harsh environments, cutting off fenders and removing the entire front or rear sections of the car, or jacking them up to allow for more ground clearance over boulders and inclines. They would add tall antennae on the back for CB radios and winches and luggage racks to prepare for the inevitable times they would get stuck or bogged down out in the wilderness.

Meanwhile, in England, a British racing champion named Vic Elford was becoming famous for winning rally events in Porsches modified to better handle cross-country terrain. By the 1970s, Porsche was participating in rallies in Africa with so-called Porsche 911 SC Safari cars outfitted with additional ground clearance, massive underbody protection, and frames reinforced for the 3,000-mile-plus competitions. In 1978, Porsche took the second and third places in the Kenya Safari Rally, the only team to reach the finishing line with two vehicles still running. In 1984, a Porsche 935 911 won the world’s most prestigious off-road race, the Paris to Dakar Rally.

Of course, not only Porsche has this history — rally-style Ford Broncos have criss-crossed desert sand virtually since the Bronco debuted in 1965 (in 1971, Ford debuted a limited-run Baja Bronco to commemorate the Bronco’s victories in both the Baja 500 and Baja 1000 events); Mercedes famously raced a 1980 Mercedes-Benz R107 500SL; and Audi, Lancia and Subaru each have long rally histories. Even Saab is in on the act, including the grey one with orange racing stripes that enthusiast Mark Skinner built in Brooklyn, New York last year. It was inspired by the Saabs that won the Great American Mountain Rally in New York in 1956.

“The Safari thing transcends all demographics — from people on the street to other drivers on the road to little kids who see it and scream,” said Skinner, who owns Zurich Classic Motors, a company specialising in buying and selling Saabs from the 1980s and 1990s. “The style is becoming more and more popular as technologies continue to stump the visceral experience of cars. In the Safari car, everything is visceral: Just modern enough but not too modern.”

There are no clear numbers of growth of what has always been a corner of a corner of a niche industry, but a quick jaunt through Instagram, YouTube, car gatherings and even Bring a Trailer lends plenty of evidence that its awareness and popularity are on the rise. In the American South, Leh Keen has built Safari-inspired 911s as fast as he could sell them since 2016; Tuthill Porsche in England has built them since 1977.

“The Safari/rally market is going like it’s never gone,” Gamroth said. “The phone rings every day with people wanting to talk about rally Porsches and parts. It’s way up — it’s gone nuts. I honestly don’t see any end in sight.”

Most recently, Jim Glickenhaus’s Baja Boot truck spanked Ford’s own entry in the Baja 1,000 in November. The win is notable: Glickenhaus made his name building what must be the farthest thing from off-road rigs — half-million-dollar racing Ferraris. You can buy one of your own for US$250,000 and a little bit of a wait. (Demand is at all-time highs, said Glickenhaus.)

But it is among Porsche aficionados that the appetite for rally cars has truly flourished — and from the oddest glut. Owners of expensive old Porsches such as Turbos from the 1970s (US$200,000 and up) used to be able to count on feeling special any morning they chose to pull into the parking lot at a local car gathering. The same goes for those who own handcrafted and bespoke cars built by California-based shops such as Emory Motorsports and the aforementioned Singer, which recently started selling a US$1.8 million car. These days, those owners often find themselves joined by two or three others driving similar models, with all having expected to feel special. It is like showing up at the party to find you are not the only girl wearing vintage Versace.

The ubiquity of those once-elusive Porsches has prompted wealthy owners to look for something even more exotic. It has pushed the formerly humble, extremely rarefied world of rally cars into the upper echelons of design and pricing.

Enter Russell of Baja 911 fame. He built the car out of his shop, Russell Built Fabrication, but he honed his skills over nine years as a metal fabricator at Singer, the California company at which he built more than 170 of the company’s US$650,000-plus cars.

During his time there, Russell realised that a car is like a blank canvas — open to any whim of the person daring enough to modify its basic shape. So the lifelong off-road racer and dirt-bike world record holder found himself fantasising about how he would build one if he could build it any way he wanted.

“When the Safari scene got popular, it was impressive, but it also pissed me off,” Russell said. “People were ranting and raving over some of the cars, but I had grown up driving in the dunes. I was like ‘It’s just a lift kit and a [headlight] rack’,” he said, referring to cosmetic upgrades that lacked significant mechanical ability underneath the hood.

“I knew there would be a market for the people who appreciate well-engineered and well thought-out vehicles that can really go off-road, not just look like it,” he said. So, he spent six months imagining how he would build a Safari Porsche and then drew up designs. He paid US$32,000 for an old Porsche 911 Cabriolet in Huntington Beach, California and spent the next 18 months hand-making the components he would add. He carved a roll cage out of aircraft aluminium, body panels out of sheets of chromoly and headlight covers out of carbon fibre. And he called on Gamroth, of Oregon’s Rothsport Racing, to build a new engine for it.

It took Russell seven tries, using carving foam, just to get the shape of the rear of the car right; he spent months working nights and weekends — plus his life savings — to refine the line of the side rockers, the size of the fender flares and the angle of the roofline. By the time he had finished, he was down to his last three months’ rent. (Russell left Singer in 2018 to focus solely on building the car on spec.)

“The Porsche world is super picky,” said Russell. “All the little details are the difference of what make those cars highly sought after or just another garage build. I knew I’d have one shot to blow them all away or for everyone to say ‘Good luck, dude’ and forget all about it. This would never work if I made it look like just a cheap Jeep shop.”

So far, so good. Though it has not raced, the Baja 911 has proven itself on dry runs through California back roads and up its rocky mountain passes. It has been promised to an enthusiast in Germany. Russell has already confirmed several additional commissions for 2020 — and counting. — Bloomberg