US$185,000 Porsche Taycan a stealth revolution 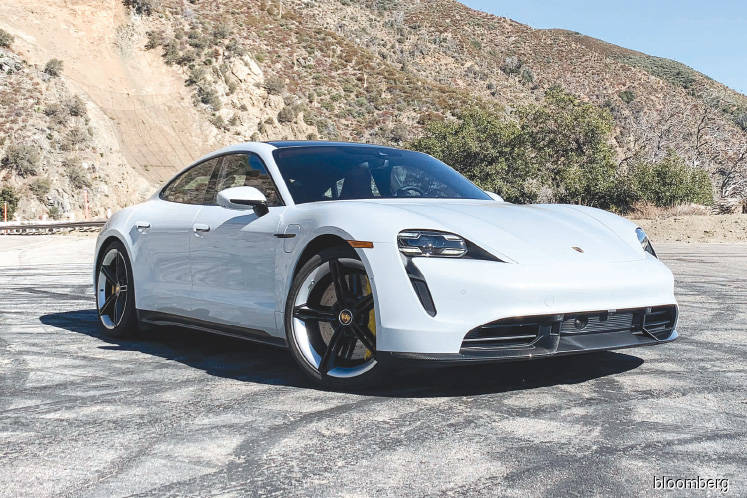 While the Taycan does not have a huge competitive set, it finds itself in an elite context.

When driving the 2020 Porsche Taycan Turbo S, there is a direct connection between aggression and battery life.

The ride up Highway 2 to Newcomb’s Ranch restaurant, high above Los Angeles, loops you through hills until you are 5,600ft (1.71km) above sea level. It is a thrilling location to test the Taycan, the perfect place to revel in its whopping strength and inexorable speed. It also sucked almost 40% of the total battery life. As I climbed past the signs to Wrightwood and the hairpin curve carved next to the lonely ranger station halfway up, I watched the charge seep out of the car like I was watching my fate unfold in an old-fashioned hourglass.

Upon arriving at the top, as I parked next to the big white sign out front, I fretted: I may have cut it too close. Would this new-fangled electric Porsche have enough juice to make the 40 miles (64.37km) all the way back down?

Naturally, the Taycan used only 2% of battery on the way back down. The regenerative brakes, I must say, are the best I have felt in any electric vehicle (EV) ever: responsive, strong, and, most crucial, smooth. In the end, it was all good. More than good — exhilarating.

I had been very curious to know how this svelte sedan fits into the current galaxy of electric and plug-in cars. Going into my test drive of the US$185,000 (RM769,600) Porsche Taycan, I was armed with time behind the wheel of everything else on the current market of electric performance: the Polestar 1, the Jaguar I-Pace sport utility vehicle (SUV) (“a cheaper, sexier Model X”), the BMW i8 sports car, electric Minis, the Tesla models S and X, the now-infamous Fisker Karma (as I said at the time, “this is a very bad car”). Heck, I even had the world’s first drive of the pure-electric, carbon-neutral Pininfarina Battista.

While the Taycan does not have a huge competitive set, it finds itself in an elite context. All these cars have great strengths and scattered weaknesses. Some, like the Polestar 1, are significantly stronger than most when it comes to performance, range, creature comforts, and value. Compared to the Taycan, Volvo’s luxury offshoot offers a stylish, plush coupe that is smaller but has longer range.

Others earn kudos for beating the pack to market (in the case of the BMW i8, by a decade or so); still others will go down in history as being the revolutionary impetus to an entire sea change in the industry (the Model S). The Taycan looks better than the Tesla Model S and is better built, too, with a true sense of engineering and creature comforts that only a 71-year-old German automaker such as Porsche can provide. From the leather dashboard and seats, the metal knobs and the sound of the doors when they thud shut, Taycan feels like a real car, not an appliance or a big computer on wheels. Sorry, Elon.

That said, please note: This is the story of the gradual evolution of progress, not a quantum leap forward. Each of the vehicles in this EV set all (still) take roughly eight hours for a full battery charge on most chargers and record 250 to 300 miles of driving range, give or take. Taycan is marginally better than most, but at this point it is a status symbol just as much as it is a great driving car.

A nod to history

The Taycan itself — this one white, like the Mission E concept before it — was delivered to me recently on a quiet Saturday morning. It rolled into a downtown Los Angeles driveway and then sat, humming almost imperceptibly, while I walked circles around it. It looks like space, rounded at the front with a sloping hood and curved fenders. I love the dark, panoramic rooftop that spans the length of the body — you do not notice it at first, but the effect makes the car seem stealthy when it moves. The headlights, too, are great: Oriented so they hang vertically, like fangs, their four-point LED beams form perfect brackets to the front of a car, like the perfect frame around your favourite photo.

I opened the door: Everything I had anticipated about its cabin came to life the moment I sat behind the steering wheel, like black and white turning into technicolor. The Taycan feels futuristic and, at the same time, also familiar in an inevitable kind of way, like a message transmitted from another galaxy that was written centuries ago. The centre console between the two front seats, near where my elbows hit, has a wide touchscreen that forms a thick divider between the people in the front of the car. It could easily have been mocked up from the 928’s own centre console design, a pleasing nod to history past at Porsche. (The 928 was discontinued in 1995.)

The console, refreshingly simple in touchscreen format, takes up the bulk of the centre area on the dash, providing access for adjusting climate, navigation, drive settings, and audio. There are lots of other screens in the car — 53 total inches, with virtually no buttons or knobs, except for those on the steering wheel. Behind it, a 16.8-inch (42.67cm) screen is customisable through either a three-gauge setup or the traditional five-gauge setup found in vintage Porsches worldwide; the dials show speed and engine revs, maps, battery levels, range, and drive modes.

Thankfully, Porsche has seen fit to include all the necessary storage space, cupholders, and the like inside the Taycan, while leaving the rest minimal. Two “trunks” come as expected, in the traditional back of the car and under the hood. The rear seat will easily fit two adults, though legs may begin to feel cramped after a few hours in the back.

By now, you know the performance stats: 750 horsepower; zero to 60mph (69.56kph) in 2.6 seconds; two “gears” (one for strong power under lower speeds, the other for sustained efficiency at high speeds); and a range of 256 electric miles on a single battery charge. But driving, of course, is different than reading figures compiled under test lab-perfect conditions.

My first sensation as I pushed the accelerator pedal heading up Angeles Crest outside Los Angeles was one of heft: The 5,100-pound (2.31 tonnes) Taycan feels solid and brawny, like a proper GT car. This is no sport coupe; it is not light, and it is not a whip-around kind of car. This is a car for adults with real needs, who do proper driving. It is stealthy and docile when needed, with killer instinct on tap.

I did not so much as hear the car as feel it move beneath me, but as I accelerated to 40 mph or so, the sound of the tyres on the road emerged, as did the hum of the motors as they operated all around me. Did anyone I passed on the street realise I was driving the special new electric Porsche that the company had been hyping for years? Not to my knowledge. I did not get a single glance. Not even the highway patrolman I passed on the way up to Newcomb’s noticed me doing, well, considerably more than the speed limit permitted. (That may actually be an additional benefit of the Taycan’s family sedan looks, and its quiet drive.)

Porsche, by the way, claims it has no plans to phase out the similarly-shaped Panamera; at the same time, it has not said it will electrify that one specifically, either.  The compact SUV, the Macan, has already been announced as next in line for EV capability. Watch this space closely to see how that all unfolds.

The second thing I felt when I drove was pure speed. The Taycan swallows miles with voracious abandon, showing no effort whatsoever, practically inhaling asphalt and gliding over potholes as you reach triple-digit speeds much quicker than you are probably used to. In simple terms: It is so fun. Driving Taycan feels as if you have sat into a huge magnetic disc hovercraft that whirrrrss up and down the road. It is balanced to perfection around corners and never falters or hesitates pushing up around a bend. You will be thrilled to the feeling of it, egged on by the whirring sound of the motors and the sound of the tyres. Anyone who says electric cars are not as exciting to drive as combustion-engine cars has not driven this one. It is intoxicating.

Not the first, but the most important

The Taycan is not the first electric vehicle to bear the Porsche name, though it is by far the most significant.

The EV distinction belongs to the Lohner-Porsche Electromobile, which debuted at the Paris Auto Expo in 1900. Porsche’s “Semper Vivus” hybrid vehicle debuted soon after, both short-lived experiments doomed by underpowered motors and the lack of any EV infrastructure whatsoever.

But the Taycan is easily the most revolutionary car Porsche has ever produced, the most do-or-die proposition in any form that the 71-year-old brand has considered since it introduced the 911 — to vociferous criticism — in 1963. (Critics then thought 911 was an abomination in the face of the simple, slow, and curvaceous 356 that Porsche had produced since 1948.)

I do not envy the engineers and designers and executives responsible for bringing forth Taycan since the Mission E Concept debuted four years ago. In the auto industry, as in life, you get one chance to make a first impression — especially a first impression that is meant, ideally, to land an eventually fatal blow to Tesla. The Taycan is the figurehead of a US$6 billion investment into electric mobility that will eventually reach even the 911. It represents the most money Porsche has ever spent on a new model. And it provides the new electric platform Volkswagen-owned sibling Audi will borrow for its own e-Tron series. It must be perfect.

I predict that wealthy, conscientious, image-conscious consumers will consider it so. As will the Porsche faithful — many of whom are wary of what an electric car means for the fate of the internal combustion engine at one of the sports car brands that have produced it most iconically. Those still voicing concerns as to whether Taycan qualifies as the new jewel in the Porsche crown, I am guessing, I have not driven it yet. It is the perfect augmentation to a garage already sporting a Macan SUV or 911.

I suspect the worst thing about the Porsche Taycan, in fact, will be trying to get one. Porsche said it plans to make 20,000 of them in the first year of production — but orders, by all accounts, are closer to 40,000. To put that into perspective, Porsche sold 35,000 911s last year, and fewer than 25,000 Caymans and Boxsters combined. What is more, Porsche has already announced production delays at the new Zuffenhausen factory as the company works to meet demand. According to Calvin Kim, the Porsche spokesman in charge of Taycan, wait lists to receive pre-ordered Taycans will reach into multiple months.

To which I say, have patience. Taycan is worth the wait. — Bloomberg