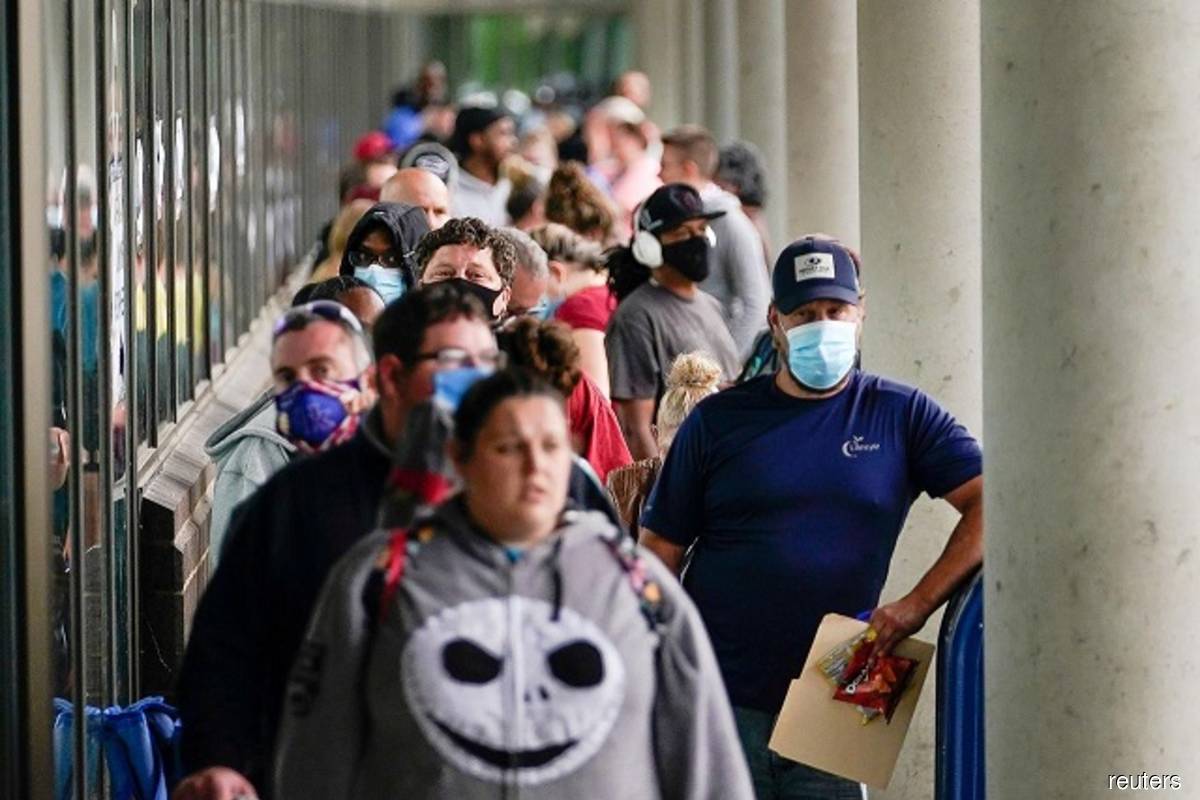 WASHINGTON (May 27): The number of Americans filing new claims for unemployment benefits dropped more than expected last week as layoffs subsided, with companies desperate for workers to meet surging demand unleashed by a rapidly reopening economy.

The economy, which in the first quarter notched its second-fastest growth pace since the third quarter of 2003, is gathering momentum, with other data on Thursday showing business spending on equipment accelerated in April. Activity is being boosted by the Covid-19 pandemic's easing grip and nearly US$6 trillion in relief provided by the government over the past year.

"The economy is off and running," said Scott Hoyt, a senior economist at Moody's Analytics in West Chester, Pennsylvania. "Going forward, growth will be supported by the pent-up savings that households have amassed during the pandemic."

Initial claims for state unemployment benefits fell 38,000 to a seasonally-adjusted 406,000 for the week ended May 22, the Labor Department said. That was the lowest since mid-March 2020 and kept claims below 500,000 for three straight weeks.

Economists polled by Reuters had forecast 425,000 applications for the latest week. Though claims remain well above the 200,000 to 250,000 range that is viewed as consistent with healthy labour market conditions, they have dropped from a record 6.149 million in early April 2020.

Pandemic-related restrictions on businesses have been rolled back, with more than half of adults in the United States fully vaccinated against Covid-19, leaving factories, construction sites, restaurants and bars, among many, clamouring for workers.

The labour shortage, despite nearly 10 million Americans being officially unemployed, has been blamed on the safety net strengthened during the pandemic by the government to provide a temporary lifeline, following the unprecedented economic and human carnage caused by the virus.

Republican governors in at least 23 states, including Florida and Texas, have announced they are ending unemployment programs funded by the federal government next month, including a weekly US$300 subsidy, which businesses say are discouraging the jobless from seeking work.

There is, however, no consensus that the generous unemployment benefits are keeping people home. According to JPMorgan economist Daniel Silver, an analysis of unemployment rates, wage growth and labour force participation rates in the 23 states suggested that the early termination of the special benefits programmes was motivated by politics, rather than economics.

"While some of these states have tight labour markets and strong earnings growth, many of them do not," said Silver. "It therefore looks like politics, rather than economics, is driving decisions regarding the early ends to these programs."

US stocks opened higher. The dollar was steady against a basket of currencies. US Treasury prices fell.

A survey by Poachedjobs.com, a national job board for the restaurant/hospitality industry, found most had returned to work, with a full schedule of 30-40 hours a week.

For others, uncertainty about future restrictions on indoor dining and fears of contracting the virus, whether they are vaccinated or not, were keeping them away.

"Workers are returning to work," said Ashley Lange, associate product manager at Poachedjobs.com. "It's just happening at a slower pace than restaurant job creation, but this is a growing pain of millions of restaurants reopening at the same moment."

The labour shortage is blamed for the modest 266,000 jobs created in April, a slowdown from the 770,000 added in March. Economists expect the early termination of the government-funded benefits and broadening economic re-engagement to push claims even lower and shrink the jobless rolls in the months ahead.

The claims report showed that the number of people continuing to receive benefits after an initial week of aid, declined 96,000 to 3.642 million in the week ending May 15. The so-called continuing claims, which are reported with a one-week lag, covered the period during which the government surveyed households for May's employment report.

The decline strengthens expectations that hiring picked up this month. In a separate report on Thursday, the Commerce Department confirmed that gross domestic product increased at a 6.4% annualized rate last quarter. The unrevised estimated followed a 4.3% growth rate in the fourth quarter.

The strong growth momentum held early in the second quarter, with another report from the Commerce Department showing orders for non-defense capital goods excluding aircraft – a closely-watched proxy for business spending plans – jumped 2.3% in April.

With households sitting on at least US$2.3 trillion in excess savings, demand booming, inventories low and corporate profits rebounding, businesses are likely to continue investing in equipment to boost production.