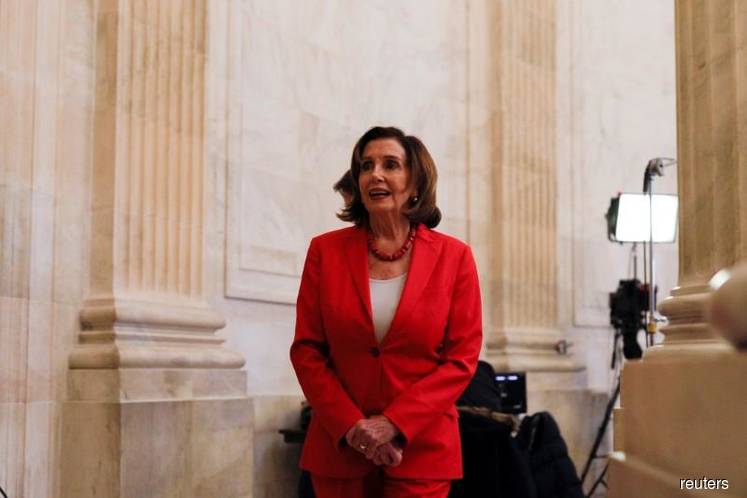 WASHINGTON (March 25): The U.S. Senate's unanimous passage of an estimated US$2.2 trillion coronavirus relief bill sent the unprecedented economic rescue legislation to the House of Representatives, whose leaders hope to pass it on Friday.

The plan will speed direct payments on their way to Americans within three weeks, once the Democratic-controlled House passes it and President Donald Trump has signed it into law, Treasury Secretary Steven Mnuchin said.

The Republican-led Senate approved the bill - which would be the largest fiscal stimulus measure ever passed by Congress - by 96 votes to zero late on Wednesday, overcoming bitter partisan negotiations and boosting its chances of passing the Democratic-majority House.

The unanimous vote, a rare departure from bitter partisanship in Washington that followed several days of wrangling, underscored how seriously members of Congress are taking the global pandemic as Americans suffer and the medical system reels.

"When there's a crisis of this magnitude, the private sector cannot solve it," Senate Democratic Leader Chuck Schumer said.

"Individuals, even with bravery and valor, are not powerful enough to beat it back. Government is the only force large enough to staunch the bleeding and begin the healing."

The Committee for a Responsible Federal Budget estimated the price tag at US$2.2 trillion.

The package is intended to flood the country with cash, in a bid to stem the crushing impact on the economy of an intensifying pandemic that has killed about 1,000 people in the United States and infected nearly 70,000.

Only two other nations, China and Italy, have more coronavirus cases than the United States. The World Health Organization has warned the United States looks set to become the epicentre of the pandemic.

The American government's intervention follows two other packages that became law this month. The money at stake amounts to nearly half of the total US$4.7 trillion the U.S. government spends annually.

Trump, a Republican who has promised to sign the bill as soon as it passes the House, expressed his delight on Twitter. "96-0 in the United States Senate. Congratulations AMERICA!" he wrote.

House leaders said they would have a voice vote on Friday. House Speaker Nancy Pelosi said she backed the bill, and was open to passing more legislation if needed to address the crisis in the future.

The House Republican leadership is recommending a "yes" vote. Republican leader Kevin McCarthy predicted the measure would pass. He said the voice vote would take place Friday morning, following a debate, but noted the entire House might not be present.

The massive bill, worth more than US$2 trillion, includes a US$500 billion fund to help hard-hit industries and a comparable amount for direct payments of up to US$3,000 apiece to millions of families.

The legislation will also provide US$350 billion for small-business loans, US$250 billion for expanded unemployment aid and at least US$100 billion for hospitals and related health systems.

The House has 430 members, most of whom have been out of Washington since March 14. Many want to return for the vote, but for all to attend would be difficult, given that at least two have tested positive for the coronavirus, a handful of others are in self-quarantine, and several states have issued stay-at-home orders.

The Senate's No. 2 Republican, John Thune, missed Wednesday's vote, because he was not feeling well. His spokesman said Thune flew back to his state, South Dakota, on a charter flight Wednesday, accompanied by a Capitol Police officer and wearing a mask.

There are five vacant House seats.