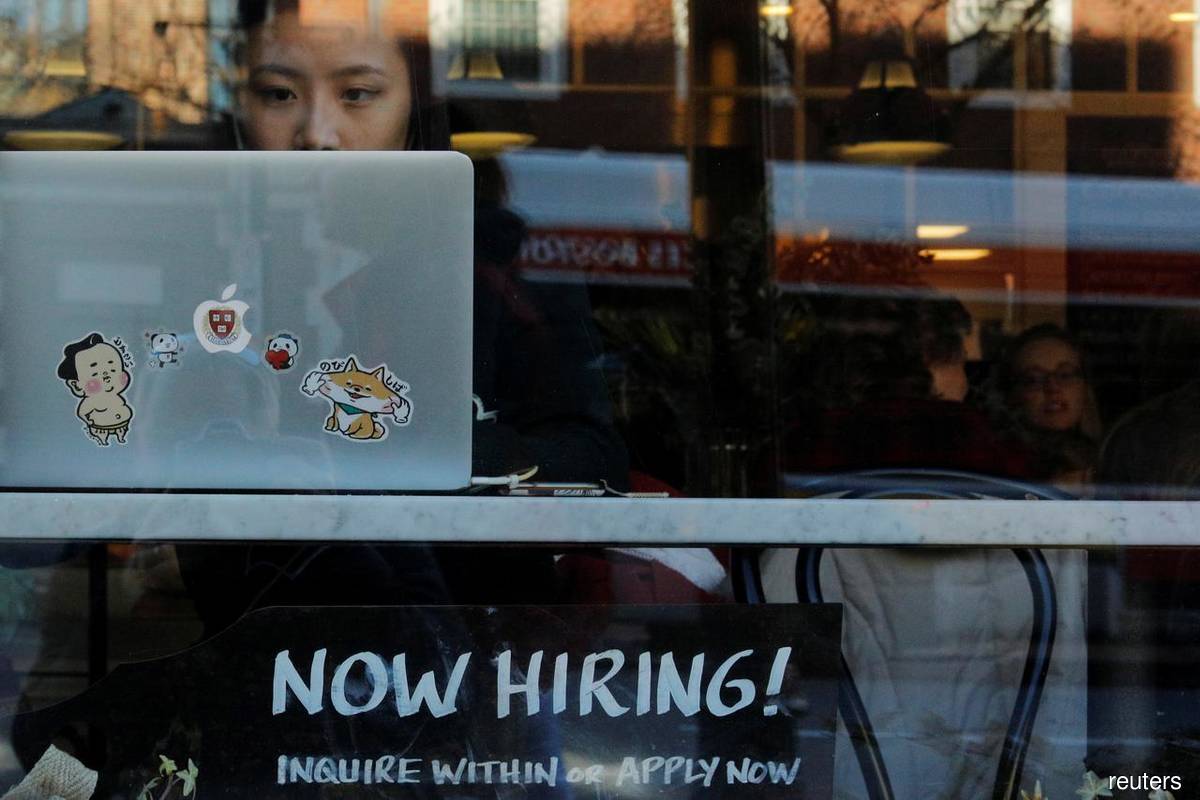 WASHINGTON (March 31): US private employers hired the most workers in six months in March, as more Americans got vaccinated against Covid-19, pushing the economy towards a broader reopening, which is expected to unleash a strong wave of pent-up demand in the coming months.

Though the private payrolls gain shown in the ADP National Employment Report on Wednesday was slightly below economists' expectations, the jump in hiring aligned with a recent improvement in labour market conditions. The broad-based increase was led by the leisure and hospitality industry.

The labor market and economy are also being supported by the White House's massive US$1.9 trillion pandemic relief package.

"Companies were hiring again in March and the economy was roaring," said Chris Low, chief economist at FHN Financial in New York.

Private payrolls surged by 517,000 jobs this month, after rising 176,000 in February. Economists polled by Reuters had forecast private payrolls increasing by 550,000 jobs in March.

The leisure and hospitality sector added 169,000 jobs, after only 51,000 in February. Construction payrolls rebounded by 32,000 jobs, while hiring at factories rose by 49,000 positions.

The ADP report is jointly developed with Moody's Analytics.

It has a very poor track record of predicting the private payrolls count in the government's more comprehensive and closely-watched employment report, because of methodology differences. Recent reports have pointed to rapidly improving labour market conditions.

The number of Americans filing new claims for unemployment benefits has dropped to the lowest level since the start of the Covid-19 pandemic in March 2020. A report on Tuesday showed a measure of household employment rebounding by the most in a year in March, after three straight monthly decreases.

Stocks on Wall Street were higher. The dollar slipped against a basket of currencies. US Treasury prices fell.

According to a Reuters survey of economists, nonfarm payrolls likely surged by 647,000 jobs in March, after rising by 379,000 in February. The government is due to publish March's employment report on Friday.

"We still expect nonfarm payrolls to show an above-consensus 700,000 gain, with a lot of that gain reflecting the rebound in leisure and hospitality employment," said Michael Pearce, a senior US economist at Capital Economics in New York.

Economists are hopeful that the labour market has turned the corner, after shedding 306,000 jobs in December. The relief package passed this month is sending additional US$1,400 cheques to qualified households and extending the government safety net for the unemployed through Sept 6.

That is expected to drive consumer spending beginning in March. In addition, Americans have amassed about US$1.9 trillion in excess savings, which economists expect will fuel consumer spending when the economy fully re-opens this year and well into 2021, and spur demand for workers.

Atlanta Federal Reserve bank president Raphael Bostic said on Tuesday that "a million jobs a month could become the standard through the summer."

Employment is 9.5 million jobs below its peak in February 2020. While the labour market is regaining its footing, the housing market appears to be stumbling, as surging prices amid tight supply and rising mortgage rates reduce affordability.

A separate report on Wednesday from the National Association of Realtors showed its Pending Home Sales Index, based on contracts signed in February, tumbled 10.6%, with contracts falling in all four regions.

The supply of existing homes is at a record low. The 30-year fixed-rate mortgage has risen to a nine-month high of 3.17%, according to data from mortgage finance agency Freddie Mac. Mortgage rates have increased since February.

The decline in contracts suggested sales of previously-owned homes could fall further in March, after dropping sharply in February. A third report from the Mortgage Bankers Association showed applications for loans to buy a home fell last week, after four straight weekly increases.

"The housing market continues to face both tailwinds and headwinds. Pent-up demand and a strong economic rebound should support sales, as we head into the heart of the spring home selling season," said Nancy Vanden Houten, lead economist at Oxford Economics in New York.

"However, tight inventories and home prices at multi-year highs will make home-buying difficult for some households."

Data on Tuesday showed the S&P CoreLogic Case-Shiller house price index soared 11.2% in January from a year ago, the fastest in 15 years, after rising 10.4% in December.