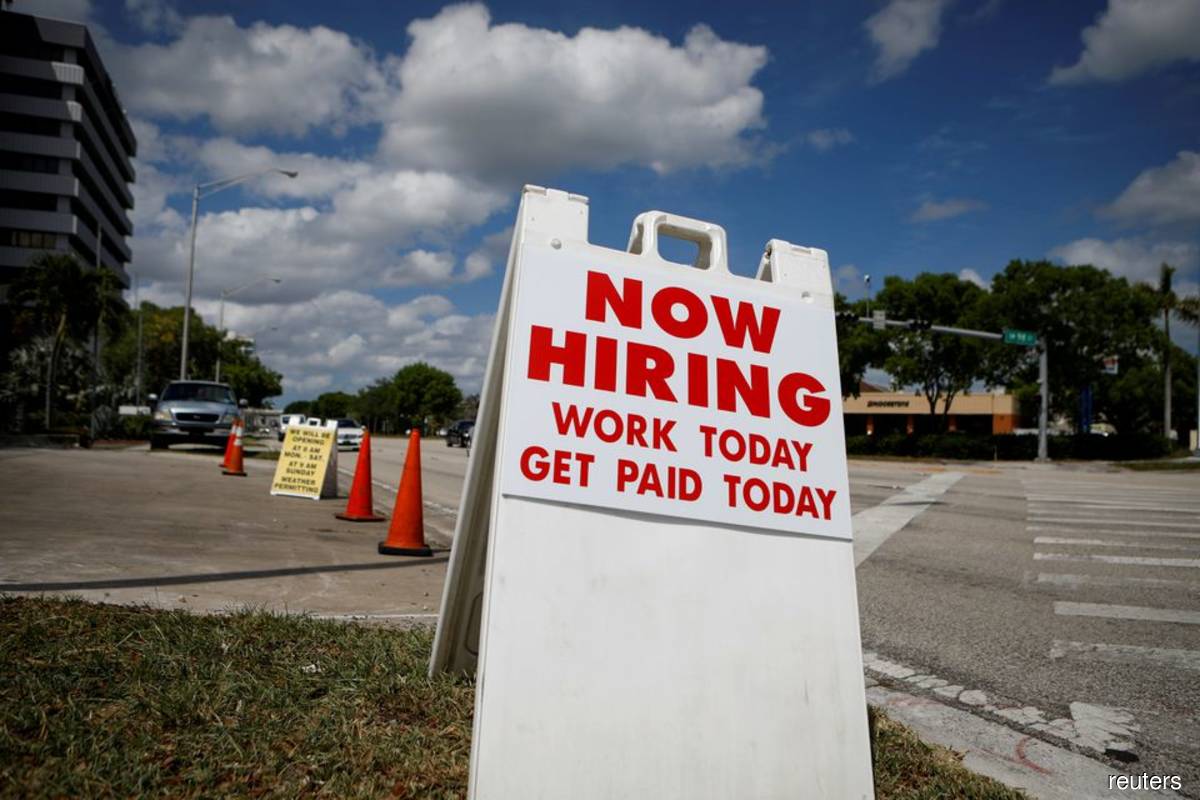 WASHINGTON (Jan 7): US employment growth likely picked up in December, culminating in record job creation in 2021, but the labour market could temporarily lose its lustre as raging Covid-19 infections cause disruptions at businesses and schools.

The Labour Department's closely watched employment report on Friday is also expected to show the jobs market rapidly tightening, with the unemployment rate seen falling to a 22-month low of 4.1% from 4.2% in November. It will sketch a picture of an economy that closed 2021 on a high note, even if the public health picture is not as improved as officials had hoped.

"Unfortunately the economy's path is still tethered to the pandemic and Omicron is going to deliver a significant blow to the economy in the first quarter," said Ryan Sweet, a senior economist at Moody's Analytics in West Chester, Pennsylvania.

Nonfarm payrolls likely increased by 400,000 jobs last month after rising 210,000 in November, according to a Reuters survey of economists. Should payrolls meet expectations, a whopping 6.5 million jobs would have been created in 2021.

This would be the largest annual increase in employment since record keeping started in 1939, a fact that is likely to be highlighted by President Joe Biden, who celebrates his first anniversary in the White House this month.

The government surveyed businesses and households for last month's employment report in mid-December just as the Omicron variant was barrelling across the country. The United States reported nearly 1 million new coronavirus infections on Monday, the highest daily tally of any country in the world.

Airlines have cancelled thousands of flights and some school districts have suspended in-person learning. Some working parents may have to take on childcare duties, with the reversion to online learning.

People who are out sick or in quarantine and do not get paid during the payrolls survey period are counted as unemployed even if they still have a job with their companies.

"The chaos caused by the rapid spread of the Omicron variant came too late to have much effect on December payrolls, which we estimate increased by a healthy 350,000," said Michael Pearce, a senior US economist at Capital Economics in New York. "But the huge numbers of people being told to isolate could drive a significant drop in payrolls in January."

Economists expect November's payrolls count, which was the smallest since December 2020, could be revised higher, noting that the response rate to the survey that month was extremely low. The forecast for December payrolls is also highly uncertain, given the vagaries of the model used by the government to strip out seasonal fluctuations from the data.

Economists noted that anomalies with the so-called seasonal adjustment appeared to depress the monthly change in payrolls both last November and in December 2020.

"Unfortunately, those anomalies may get more company on Friday," said Lou Crandall, chief economist at Wrightson ICAP in Jersey City. "We would shrug off the disappointment in the reported (payrolls) level if the seasonal adjustment factors are as stingy as we have assumed."

Payrolls gains below expectations would also be due to an acute shortage of workers. The government said on Tuesday that there were 10.6 million job openings at the end of November.

There were signs in November that some unemployed people were stepping back into the labour market following the end of government-funded jobless benefits early in the fall. But the reentry could be slowed by spiralling Omicron cases.

The labour force participation rate, or the proportion of working-age Americans who have a job or are looking for one, has been slow to improve since falling to multi-decade lows early in the pandemic.

Economists at Goldman Sachs expect participation will remain about half a percentage point below the pre-pandemic demographic trend at the end of the year, with most of the early retirees and some of the younger and middle-aged workers staying out.

The unemployment and participation rates are being closely watched by the Federal Reserve as it prepares to start raising interest rates this year. Minutes of the Fed's Dec 14-15 policy meeting published on Wednesday showed officials at the US central bank viewed the labour market as "very tight."

The jobless rate plunged four tenths of a percentage point in November, while the participation rate climbed to 61.8% from 61.6% in October.

"A further notable drop ahead of the March meeting would be suggestive of earlier lift-off," said Veronica Clark, an economist at Citigroup in New York. "If further increases in participation are accompanied by a largely steady unemployment rate, the start of rate hikes would more likely come later at the June meeting."

Tightening labour market conditions are highlighted by rising wages. Average hourly earnings are forecast to have advanced 0.4% in December. The annual increase is, however, expected to decline to a still-high 4.2% from 4.8% in November. This is the result of last year's big gains falling out of the calculation.

Though inflation has outpaced wage gains, consumers have continued to spend because of massive savings and increased job security, underpinning the economy. Growth last year is expected to have been the best since 1984.