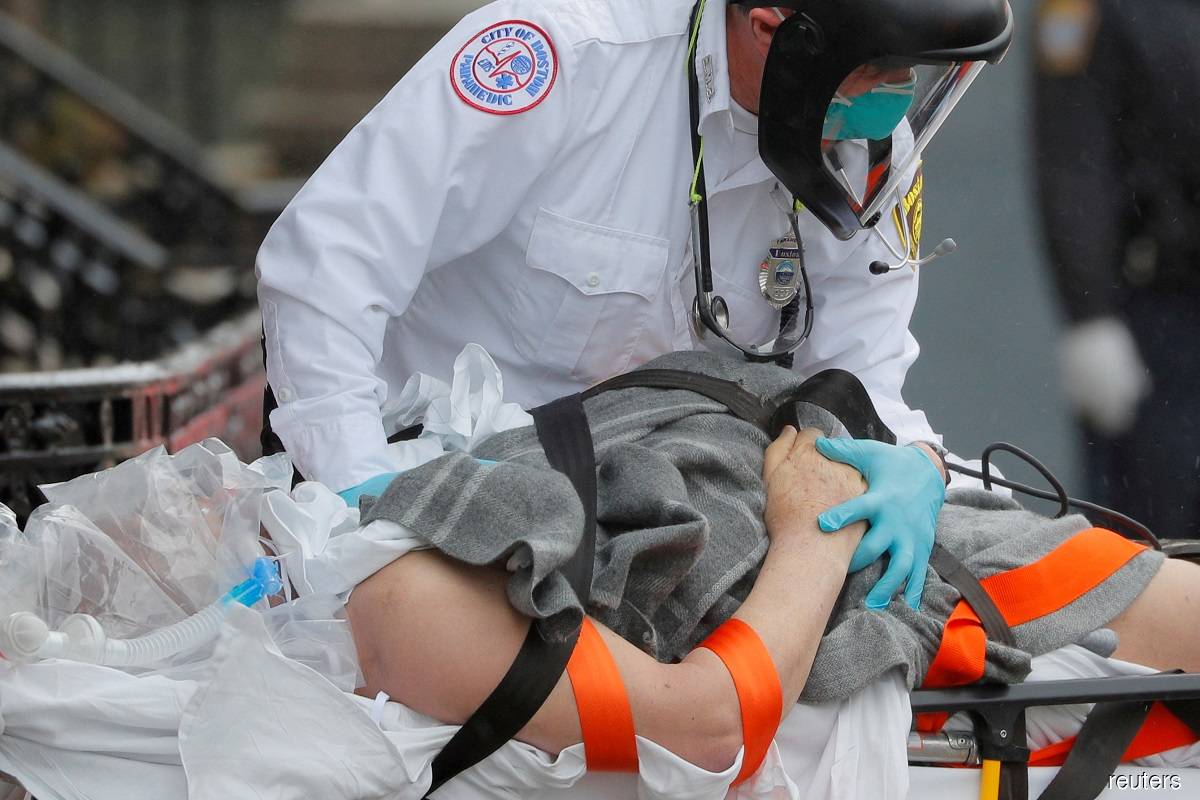 Boston EMS medics work to resuscitate a patient on the way to the ambulance amid the Covid-19 outbreak in Boston, Massachusetts, US, April 27, 2020. (File pic by Reuters)

(Sept 21): As the United States approaches the miserable mark of 200,000 deaths from the coronavirus, the pandemic is no longer focused on one or two epicenters.

Instead it is smoldering across all states, raising fears that when colder weather forces more people inside, it could surpass the surge seen in the summer.

The United States is losing on average over 800 people a day to the virus — compared with fewer than 15 a day on average in Australia, Canada, Germany, Israel, Italy and the United Kingdom.

Although new cases are down about 50% from the peak in July, the United States is still reporting on average nearly 40,000 new infections a day — the highest number in the developed world.

Top US infectious disease expert Dr Anthony Fauci has said he would like to see new cases below 10,000 per day before flu season starts in October.

"We need to hunker down and get through this fall and winter, because it's not going to be easy," Fauci said during a panel discussion with doctors at Harvard Medical School earlier this month.

"We've been through this before," he said. "Don't ever, ever underestimate the potential of the pandemic. And don't try and look at the rosy side of things."

Centers for Disease Control and Prevention Director Robert Redfield has also warned that Americans are in for "the worst fall, from a public health perspective, we've ever had," citing concerns of a possible "twindemic" of Covid-19 cases and the seasonal flu overwhelming hospitals.

Cases are trending upwards in about 20 out of 50 states, including former epicenters like New Jersey and New York that had seen cases decline for months.

Some of the biggest increases, on a percentage basis, are in North Dakota and Wisconsin, two states where cases have yet to peak and have steadily climbed since the pandemic started more than six months ago.

Other states like South Carolina and Utah peaked in July and cases have come down sharply only to recently rise again.

The epidemic first battered nursing homes in Washington state on the West Coast in January before quickly overwhelming New York City and Northeastern states in March and April.

The country enjoyed a reprieve during the early summer before seeing both cases and deaths spike in July. There is no clear consensus on what caused the spike but health officials point to Memorial Day parties, bars and other high-risk businesses reopening and the public being lulled into a false sense that the worst was over.

In the second wave during the summer, Arizona, California, Florida and Texas became the new epicenters — some of the most populous areas of the country.

Through a combination of more states requiring masks and new more targeted restrictions, that second wave has again ebbed. Still, the United States is reporting twice as many new cases each day as it did on its best days in the spring.

Former Food and Drug Administration Commissioner Scott Gottlieb told CNBC News that he worries a third wave could be more diffused and spread across a broader section of the country.

"I do think that we're going to have a third act of this virus in the fall and the winter and it's likely to be more pervasive spread in a broader part of the country," he said.