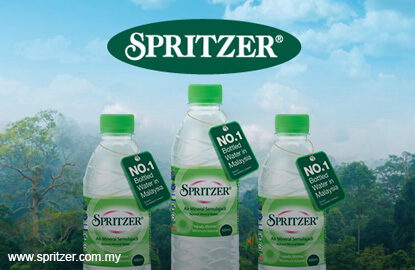 This boosted FMR's holdings in Spritzer to 9.25 million shares, equivalent to a 5.07% stake.

FMR's share acquisition in Spritzer was part of a simple portfolio of investments, the company said in a filing with Bursa Malaysia this evening.

It is worth noting too that FMR is also a substantial shareholder in Ajinomoto (M) Bhd, a monosodium glutamate manufacturer famous for its food seasoning product.

FMR holds some 3.23 million shares in Ajinomoto, equivalent to a 5.31% stake.

Headquartered in Boston, Fidelity Investments is the fourth largest mutual fund in the world, with presence in eight other countries across North America, Europe, Asia and Australia.

As at June 30, 2016, Fidelity Investments' global asset under management stood at US$2.1 trillion.