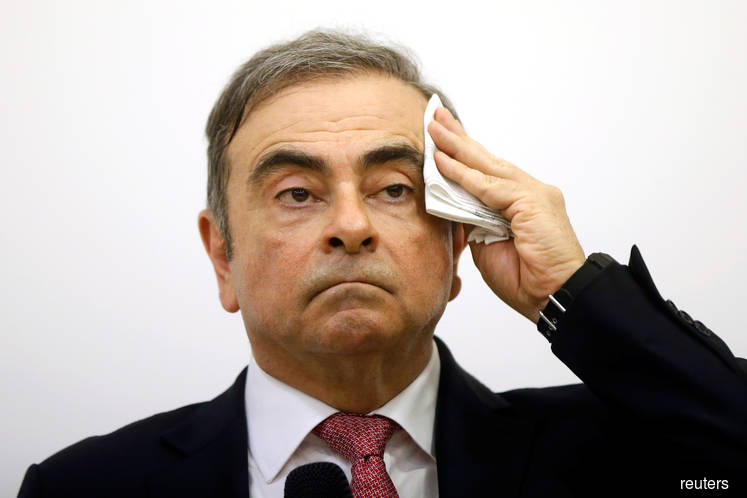 BOSTON/WASHINGTON (May 21): US authorities yesterday arrested a former US Army Special Forces soldier and another man in Massachusetts wanted by Japan on charges that they enabled the escape of former Nissan Motor Co boss Carlos Ghosn out of the country.

The US Marshals Service arrested them in Harvard, Massachusetts at the request of Japan, which in January issued arrest warrants for both men along with a third, George-Antoine Zayek, in connection with facilitating the Dec 29, 2019 escape.

Ghosn, who was out on bail at the time, fled to Lebanon, his childhood home, while he was awaiting trial on charges of under-reporting earnings, breach of trust, and misappropriation of company funds, all of which he denies.

Prosecutors said Peter Taylor travelled to Japan the day before Ghosn's escape and Michael Taylor and Zayek arrived the day it occurred with large black boxes that appeared to be for music equipment.

All three met with Ghosn, who after entering a hotel room with Michael Taylor and Zayek hid in one of the boxes which were taken to an airport and loaded onto a private jet headed for Turkey, prosecutors said.

Ghosn two days later announced he was in Lebanon.

The Taylors were arrested after US law enforcement learned Peter Taylor had booked a flight from Boston to Beirut departing yesterday with a layover in London, according to court papers.

Following their arrest, the Taylors appeared by video before a federal judge wearing orange prison jumpsuits and face masks because of the Covid-19 pandemic. They are being detained at the request of US prosecutors, who say they pose a risk of flight after aiding Ghosn's "brazen" escape. Assistant US Attorney Stephen Hassink said Japan plans to formally seek their extradition as quickly as possible.

Paul Kelly, their lawyer, in a statement said he expects to challenge any extradition request.

"Michael Taylor is a distinguished veteran and patriot, and both he and his son deserve a full and fair hearing regarding these issues, both before the courts and the executive branch," he said.

Japanese lawyer Junichiro Hironaka, who had defended Ghosn until his flight from the country, said in a telephone interview today that the key question is whether there is enough evidence for extradition, and that he would watch developments closely.

This month, Turkish prosecutors prepared an indictment charging seven people, including four pilots, over Ghosn's escape via Istanbul to Beirut.

Nissan said in an emailed statement it notes the extradition proceedings and reserves the right to take further legal measures against Ghosn. The company filed a civil suit in Japan earlier this year seeking ¥10 billion in damages from its former boss for alleged misconduct.

In September, Nissan and Ghosn settled civil charges by the US Securities and Exchange Commission (SEC) related to what it said were false financial disclosures by the company that omitted more than US$140 million to be paid to Ghosn in retirement.

That sum was ultimately was not paid. Nissan paid US$15 million and Ghosn US$1 million, and Ghosn agreed to a 10-year ban from serving as an officer or director of a publicly traded US company.

The SEC also said Ghosn engaged in a scheme to conceal more than US$90 million of compensation. Nissan sued Ghosn in February seeking about US$90 million.