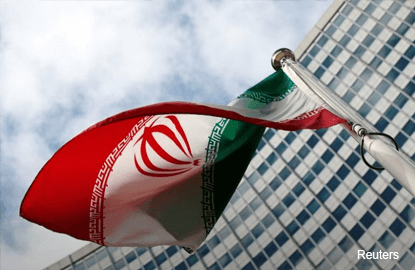 The United States on Friday sanctioned 13 individuals and 12 entities under its Iran sanctions authority, days after the White House put Tehran "on notice" over a ballistic missile test and other activities.

In a statement on its website, the US Treasury listed the sanctioned individuals and entities, some of which are based in the United Arab Emirates, Lebanon and China.

The move is the first against Iran since US President Donald Trump took office on Jan 20. The sanctions were similar to actions taken by the Obama administration targeting Iran's ballistic missile network.

The new designations stuck to areas that remain under sanctions even with the 2015 nuclear deal in place, such as the Islamic Revolutionary Guards Corps (IRGC) and Iran's ballistic missile program.

"Today's action is part of Treasury's ongoing efforts to counter Iranian malign activity abroad that is outside the scope of the JCPOA," Treasury said, a reference to the nuclear deal between Iran and world powers.

Among those sanctioned on Friday were companies, individuals, and brokers the US Treasury said support a trade network run by an Iranian businessman, Abdollah Asgharzadeh.

Treasury said he supported Shahid Hemmat Industrial Group, which the United States has said is a subsidiary of an Iranian entity that runs Iran's ballistic missile programme.

Treasury also sanctioned what it said was a Lebanon-based network run by the Islamic Revolutionary Guard Corps, the elite military body that is also powerful in Iranian politics and the economy.