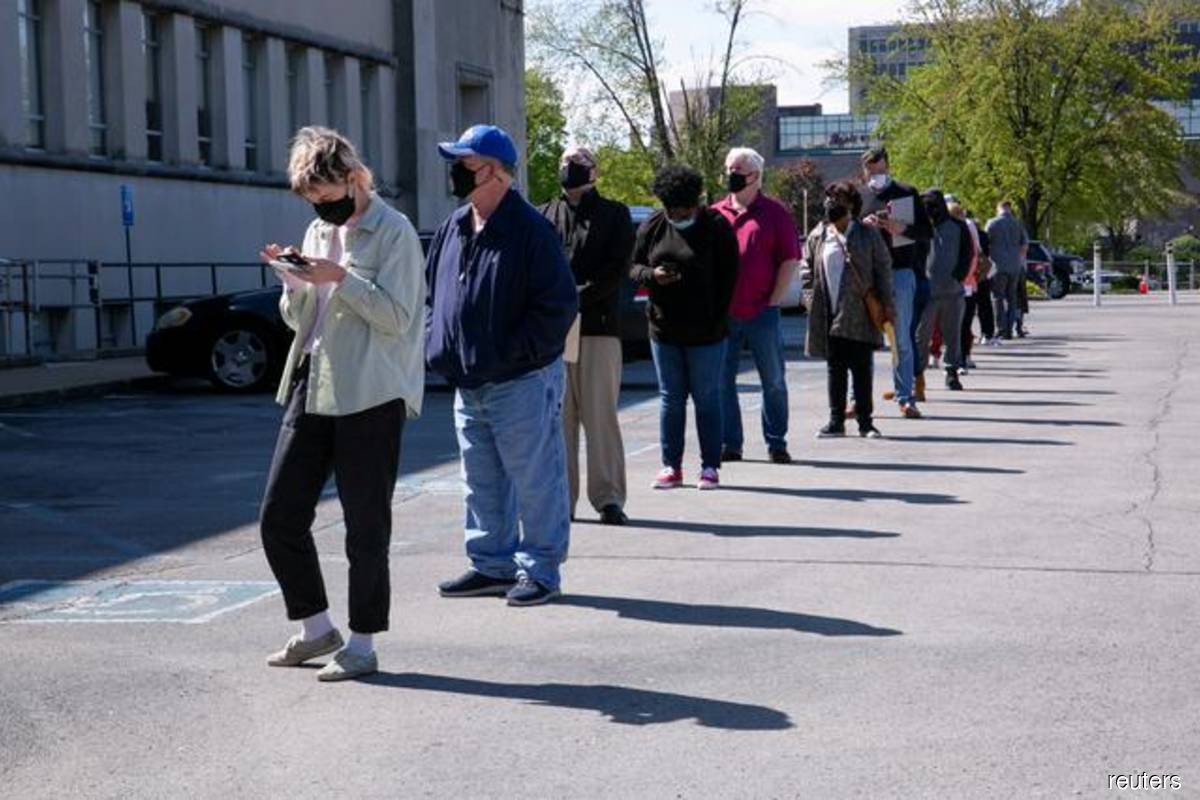 But the increase in initial claims reported by the Labor Department on Thursday was moderate. The labour market is tightening amid an acute shortage of workers. With coronavirus infection, driven by the Omicron variant, expected to peak soon, a substantial rise in claims is unlikely.

"It is possible that the recent spread of Covid has put that earlier downward trend on hold," said Daniel Silver, an economist at JPMorgan in New York. "That said, it is an encouraging sign for the labour market that claims have not meaningfully jumped in response so far."

Initial claims for state unemployment benefits increased 7,000 to a seasonally adjusted 207,000 for the week ended Jan 1. Economists polled by Reuters had forecast 197,000 applications for the latest week. Claims hovered around 200,000 for much of December. They have declined from a record high of 6.149 million in early April 2020.

Unadjusted claims shot up 57,599 to 315,469 last week. There were driven by a surge in New York, which is experiencing an explosion of cases. There were also large increases in filings in Pennsylvania, Washington state, Michigan and Connecticut.

The United States reported nearly 1 million new coronavirus cases on Monday, the highest daily tally of any country in the world. Some school districts are suspending in-person learning, which could force some working parents to assume childcare duties. Workers calling in sick are causing some businesses to either temporarily close or scale back services.

Thousands of airline flights have been canceled. Disruptions caused by the spiraling Omicron infections, together with relentless input shortages, curbed services sector activity in December, a separate report showed on Thursday.

The Institute for Supply Management said its non-manufacturing activity index fell to 62.0 last month from 69.1 in November, which was the highest reading since the series started in 1997.

The survey found that fast food restaurants were offering sign-on bonuses and high pay for lower-level jobs. Other businesses reported there were "not enough potential employees in the pipeline", and "employees (were) leaving for other opportunities at higher wages".

There were 10.6 million job openings at the end of November, with a record 4.5 million people voluntarily quitting jobs.

Stocks on Wall Street fell in volatile trading. The dollar gained versus a basket of currencies. US Treasury prices fell.

The claims report showed the number of people receiving benefits after an initial week of aid increased 36,000 to 1.754 million in the week ended Dec 25.

These so-called continuing claims remained below the 2 million mark for the sixth straight week.

The workforce is about 2.5 million people smaller than before the pandemic. There were signs in November that some of the unemployed were starting to wade back into the labor force.

Minutes of the Federal Reserve's Dec 14-15 policy meeting published on Wednesday showed Fed officials viewed the labour market as "very tight". The US central bank might need to raise interest rates sooner than expected and begin reducing its overall asset holdings to tame high inflation, according to the minutes.

The claims data has no bearing on the Labor Department's closely watched employment report for December, due to be released on Friday, as it falls outside the survey period. The government surveyed businesses and households for last month's employment report in mid-December.

According to a Reuters survey of economists, nonfarm payrolls likely increased by 400,000 jobs in December, after rising 210,000 in November. The unemployment rate is forecast falling to 4.1%, from 4.2% in November.

Prospects of a strong employment report were boosted by the ADP National employment report on Wednesday, which showed private payrolls increased by 807,00 jobs last month. That prompted economists at Goldman Sachs to raise their December payrolls estimate by 50,000 to 500,000.

A fourth report from the Labor Department on Thursday showed the trade deficit widening 19.4% to US$80.2 billion in November, as imports surged to a record high. Robust imports suggest trade likely remained a drag on economic growth in the fourth quarter for the sixth straight quarter.

"The fact that imports are growing faster than exports is a continued reflection of the more robust recovery in the United States, but it is also a sign of the incremental improvement in the easing of supply chain constraints," said Shannon Seery, an economist at Wells Fargo in Charlotte, North Carolina.