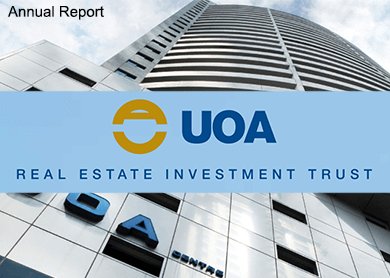 It also made a provision to distribute RM11.10 million or 2.63 sen per unit for unitholders for the quarter under review, which is 0.01 sen or 0.38% down from the 2.64 sen per unit it announced for the previous corresponding quarter.

"No income distribution was declared for the quarter under review but a provision was made to distribute 95% of the distributable income for 1QFY15 to be distributed by end of August 2015," the REIT said in its filing with Bursa Malaysia today.

The REIT recorded a revenue of RM22.78 million in 1QFY15, a 3.34% increase from RM22.05 million last year, which was due to a 3% improvement in gross rental from revision in rental rates and steady occupancy rates of the investment properties.

Moving forward, the REIT's manager foresees occupancy rates will continue to be stable for the remaining part of financial year 2015, while average rental rates are expected to remain consistent with no major changes anticipated.

"The manager will continue to adopt an active operating and capital management strategy to enhance the yields and returns of the existing properties while continuing to seek opportunities to further acquire real estate that meets the objectives of the trust," it said.