UOA Development Bhd
(May 7, RM2.27)
Maintain hold with a higher target price (TP) of RM2.25: Given the soft property market environment, UOA Development Bhd plans only four launches in 2015 (versus six in 2014), with an estimated gross development value (GDV) of RM1.7 billion (GDV of RM2 billion in 2014).

Meanwhile, the Jalan Ipoh mixed development has been delayed to 2016, which leads us to fine-tune downwards our financial year 2015 ending December (FY15) earnings per share (EPS).

The development of UOA’s next anchor project (after Bangsar South), the Jalan Ipoh mixed development has been delayed until 2016 (initially slated for 2015). The proposed mixed development project which will spread over 28 acres (11.33ha) is undergoing enhancement, including an MRT link and access to the Duke Highway. Currently, it has an estimated GDV of RM3 billion, and we gather it could be enhanced further.

UOA’s total unbilled sales rose from RM1.8 billion to RM2 billion as at end of December 2014. In 2015, the group plans to launch four new projects with an estimated GDV of RM1.7 billion. We have marginally lowered our FY15E EPS to reflect the delay in the Jalan Ipoh development, but have raised our FY16E to FY17E EPS estimates by 2% and 8% respectively, to reflect a higher GDV value for the project.

We continue to like UOA for its strong management, good product branding and strong cash position. We maintain our “hold” on UOA with a revised net asset value based 12-month TP of RM2.25 (RM2.18 previously). In the property space, we prefer Sunway Bhd (RM3.55, “buy”). The downside risk to our view includes a sharper-than-expected slowdown in the Klang Valley property market, while the FY15E dividend of 5.3% should help support the share price. — Affin Hwang Capital, May 7 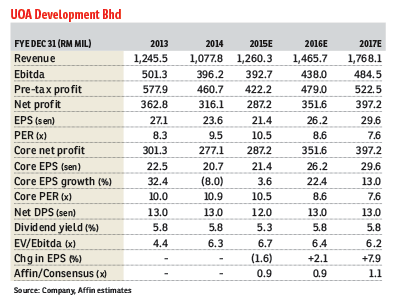