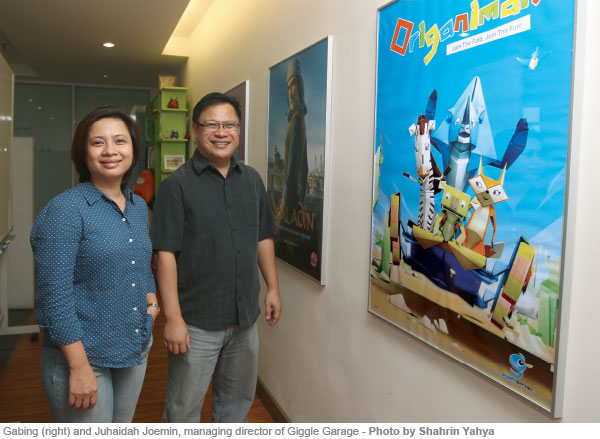 THE creative industry appears to be one of the new sweet spots of the Malaysian economy. Over the past two decades, the government has been slowly but surely putting the infrastructure in place, in terms of educational institutions and incentives, to encourage its development, especially for the animation industry in Malaysia.

For now, the creative industry makes up just over 1.2% of the country’s gross domestic product (GDP). According to a Multimedia Super Corridor (MSC) industry report, the creative multimedia cluster (CMC) accounted for RM6.39 billion or 18% of the MSC’s total revenue last year, up from 15.06% in 2012. The CMC deals with companies that specialise in the design of multimedia content that comprises an integrated collection of computer-based media, including text, graphics, sound, animation, video and photo images.

Despite the failure of the ambitious RM3 billion E-Village initiative, there has been a good number of companies tied to the creative industry in the Cyberjaya area, both local and international. The industry has yet to spawn a proliferation of SMEs, although industry experts opine that over time, more players will emerge as the incentives are there, as well as a growing talent pool.

Some of the international companies are world class and they have acknowledged the quality of human capital available in Malaysia. One of the best acknowledgements was of course when The Life of Pi won the Academy Award for Best Visual Effects.

Most of the computer-generated imagery (CGI) for the movie had been done by Rhythm & Hues Malaysia, shortly before it closed down due to bankruptcy associated with the delayed release of the movies it was working on (in Hollywood, you are only paid for your work when the movie is released and not when the work is handed over).

The schools of higher learning that are busy churning out talent for this industry include Limkokwing University of Creative Technology, MMU Cyberjaya, One Academy, Dasein College, KDU College and UiTM. But there were no numbers available as to how many graduated each year, although there have been some comments on the quality.

Stefan Baier, director of products and services at Streamline Studios Malaysia, says he found that only the top 5% of these graduates are immediately capable of true next generation content creation.

However, as seen with The Life of Pi and other projects, that while it is quite clear that Malaysian talent is up there with the best in the world when it comes to the back-end, there is still a gap in abilities when it comes to telling the stories.

“I believe that in terms of technical skills, we are already very good and more than ready for international markets. There are so many foreign projects being outsourced to Malaysia to take advantage of the animation skills and support infrastructure that are available in Malaysia,” says Zeno Gabing, executive director of Giggle Garage.

But storytelling is what will take the local creative industry to the global stage. This in turn will help make a larger contribution to the country’s GDP.

Multimedia Development Corp (MDeC) vice-president of the CMC Kamil Othman highlights that this is not something you can simply teach in tertiary education. He feels this is something that needs to be nurtured from young. And for this to happen, he believes, there must be a change to the education system as a whole.

Another problem is poor demand locally. In fact, Kamil says, there is a lot of local content being exported but is not aired on domestic broadcasting channels. What this means is that the younger generation is mostly exposed to international content.

“Most of us from the older generation were exposed to quite a lot of local artists. But later, with technology, much of the media being fed to us is from overseas,” he points out.

This affects, among others, the perception of locally produced content, as well as the demand for it. To get demand up, the mindset of an entire generation needs to be overhauled, says Kamil.

Gabing agrees. “One of our most popular animation series, BOING the Play Ranger, is aired in over 60 countries around the world.”

But not Malaysia. “We would like to see continued and even more support from local broadcasters by increasing their uptake of local animated content, especially content that is already being broadcasted outside of Malaysia,” he says.

On the regulatory side, more can be done, he adds. “In countries where the creative industry is providing a significant contribution to the national economy, we can see that there is a clear regulatory framework in place. This includes a quota system for airtime and duration for locally produced animated content.”

Nizam Razak, managing director of Animonsta Studios, does not agree. He feels that there is already sufficient demand for good locally produced content. “Since Upin and Ipin [which the four founders of Animonsta were involved in] and BoBoiBoy, there has been a lot more support from the locals when it comes to animation.

“At its strongest, BoBoiBoy was getting 1.7 million views a week. I think it is fair to say that not only is it more economical for broadcasters to get local IP [intellectual property], these shows are much closer to the heart of their audience,” he says.

Nizam thinks that it is unfair to say the broadcasters here do not support local content. “I think it is hard to convince any broadcaster to air your show if you do not have good content,” he says with some acerbity.

The government has already taken note of the lack of storytelling skills among local practitioners. MDeC and the National Film Development Corp Malaysia (Finas) continue to support the development of storytellers through activities such as scriptwriting workshops and creator’s knowledge sharing, says Gabing.

“The Creative Industry Lifelong Learning programme by MDeC is another example of the various programmes that are available for creative content industry practitioners to further upgrade their knowledge and skills,” he adds.

Gabing says IP creation is just a small part of what will contribute to the economy. “The industry is moving away from just creating content. It is about creating a business that will further generate sustainable revenue through licensing and merchandising.”

The local creative companies are beginning to realise this. Recently, for example, Animonsta Studios signed a deal with TOMY, a popular Japanese toy manufacturing company, to work on a new preschool animated series. This will open doors for additional licensing and merchandising.

“People think we are an animation company, but that is not what we do. We are a content creation company delivered through animation. We even have a BoBoiBoy magazine, which has a monthly circulation of 40,000,” says Nizam.

But problems associated with exporting content are not limited to the animation industry. The music industry faces a good deal of these as well.

M Muralitheran, founder of Modjo Studio and a veteran music producer in Malaysia, says local music studios and record labels have the same problems when they go international.

For starters, they are not willing to make the necessary investment on good sound recording. “Some of them tell me that they like my style and sound, but are facing budget constraints.”

This, he says, needs to change. “If you want your producer to get the best sound, then be prepared to pay for it. Of course, if you want cheap stuff, then you can go to less experienced producers.”

He has no quarrel with the music being produced here and acknowledges that some of the local talent are really very good. But he feels the quality is declining.

“What they are teaching in the universities here is very theory-based. So the students come out and are able to mechanically produce a song, but they may not understand why they are doing it. They don’t have a feel for the music.”

Again, it’s the same old story. While the songs may be technically perfect, there is neither storytelling ability nor emotional impact behind them. This, he admits, is not something that can be taught at university. It is something that has to be lived, experienced and expressed.

It is a great time to be part of the Malaysian creative industry as it is still in the development stage. There is much room for improvement but at the same time, there is a strong foundation already in place for fresh graduates to secure a footing in the industry. Additionally, since the creative industry is part of the government’s Economic Transformation Programme, several funding programmes have been set up to boost activity.

The government launched the Film in Malaysia Incentive (FIMI) in February 2013, a 30% cash rebate on the minimum production expenditure for domestic film production and

RM5 million for foreign production. For TV series, the minimum expenditure is RM193,000 for domestic productions and RM383,000 per hour for foreign ones.

Gabing says the FIMI has started to show results as more foreign production companies have come to Malaysia for their CGI. “Some have even set up their own studio locally to capitalise on the incentive as well as the lower cost structures, without compromising on high-end production and filming infrastructure. Regional broadcasters are also seeking out more local producers to capitalise on these incentives,” he adds.

For example, in 2013, Australia-based Essential Media announced a co-venture with Malaysian and Irish partners for an animated series called Bubble Bath Bay. Lemonsky Animation in Malaysia is sharing the co-production work for the project.

“Ultimately, the incentive is meant for growing the local industry. In recent months, while we have seen more multimillion-dollar productions setting up here, we are seeing more local producers take up the domestic incentives too,” Gabing says. 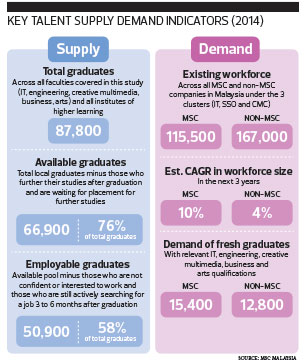 To date, MyCreative Ventures has identified visual arts, performing arts, music, literature, content creation, fashion and design, and traditional and cultural arts as eligible areas for funding. Earlier this year, it announced that it was funding 15 companies in the CMC.

However, Gabing says that despite the many channels of financial support from government agencies, there has been little to no uptake from the commercial sector in financing creative content production. “The use of IP as collateral is still very new despite the increased push from government agencies to encourage the private sector to play a part.”

Malaysia Debt Ventures, an agency under the Ministry of Finance, launched an IP Financing Scheme in 2013 which covers animation production, says Gabing. “This is a very welcome act that provides the much needed support for the industry, and we hope many more will follow suit,” he adds.

This article first appeared in Unlisted & Unlimited, The Edge Malaysia Weekly, on October 13 - 19, 2014.