Unlisted & Unlimited: The hand behind the top glovemakers

BEHIND the success of the world’s leading glove manufacturers in Malaysia are many low-profile small and medium enterprises (SMEs) quietly lending their crucial support. Kendek Group of Companies is one of them.

Set up in 1990, Kendek is involved in the manufacture of components, machinery and equipment for the makers of latex products. It is also a one-stop provider of turnkey engineering and production solutions for manufacturers.

Besides supplying the hardware, Kendek is also involved in the transfer of technical know-how and provision of staff training for the industry.

“We have played an important role supporting the glove manufacturers by supplying them the hardware and in attending to their problems all these years. We have grown with them,” says Kendek managing director Ken Lai in an interview with The Edge.

Indeed, on display with the various SME and manufacturing awards won by the company are certificates of appreciation from Hartalega.

Because of his passion for the business, Lai has contributed significantly to the industry in terms of innovation and inventions. In 1993, the then young businessman with an engineering diploma invented nylon rollers, which are heat-resistant and, hence, a cost savings for the sector. These rollers were widely used in the glove industry.

And in 2004, he developed an improved range of auto tumble dryers with the incorporation of a “double-dry” concept, where both the internal and external surface of the gloves could be dried concurrently. Later, he developed a double former conveyor chain and double former holder set for the rubber glove industry. 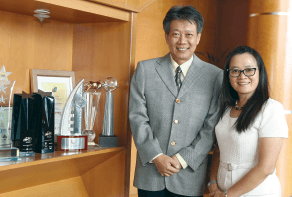 As an entrepreneur, Lai has witnessed the rapid development of the local glove industry, which started in the early 1980s after the global HIV/AIDS scare. Due to a surge in demand for rubber gloves, factories mushroomed locally, many of which imported second-hand production lines from Taiwan.

Alhough Taiwan was a major producer of gloves at the time, Malaysia soon displaced it to become the world’s top producer, due mainly to the easy access to raw materials (latex) and emergence of many serious entrepreneurs in this sector.

Lai and his wife Lilian Goh Kui Lian decided to take a different route. Instead of just being another manufacturer in a crowded sector, they chose to provide glovemakers with hardware support.

Since Lai and Goh started their company in 1990 with just RM5,000, their enterprise has focused on dipped latex products — used mainly in rubber gloves, condoms and balloons.

“We saw a future in this sector due to the strong demand for gloves and other latex products. And since the industry would need machinery and replacement of parts as it expands, we knew we would benefit from this demand,” says the 53-year-old Lai.

Since identifying its focus, Kendek has become one of the leading players supporting the glove industry, carving out a niche for itself in engineering and maintenance. It is a leading part maker and solution provider with in-depth technical knowledge of the dipped latex product industry.

Due to Lai’s emphasis on quality, all three companies in the group (Kendek Industry Sdn Bhd, Kendek Products Sdn Bhd and Strategic Products Sdn Bhd) have achieved ISO9001-2000 certification for the trading and distribution of machinery and parts for the dipped latex and palm oil industries, for the provision of turnkey projects and for the setting up of production lines and manufacturing plants.

At the interview at Kendek’s four-acre RM25 million factory and headquarters in Balakong, Selangor, Lai says business generated from local glovemakers accounted for 90% of its RM70 million turnover last year.

Lai expects revenue to grow 5% this year and 8% to 10% next year, due mainly to projected higher demand from glovemakers.

Except for 2009, when the whole industry did badly, Kendek has been profitable for the past 20 years. It has achieved an average annual net profit of between RM5 million and RM6 million for the last 10 years.

Apart from its operations in Malaysia, Kendek has a factory in Songkhla, Thailand, to cater for business in the north. That operation sees an annual turnover of about RM15 million.

As an established and successful SME, Kendek hopes to list on either Bursa Malaysia or a foreign stock exchange within five years. “It is the ultimate ambition of all businessmen to have their companies listed. But for me, listing may also help the company attract the best people to come and work for us,” says Lai. Apart from capital raising, listing will also give the company brand recognition.

Meanwhile, Kendek is looking at moving into balloon and condom making. It will not touch glovemaking as it does not want to compete with its existing customers.

For a start, it has acquired loss-making balloon manufacturer KDI Industries Sdn Bhd in Alor Gajah, Melaka. “We bought this factory two years ago. With our technology and know-how, we have turned it around,” says Goh, beaming with pride. The 50-year-old is in charge of Kendek’s finance, management and administration.

KDI produces 30 million balloons a month, with 95% exported to more than 30 countries. It is one of the two main balloon makers in Malaysia.

Kendek also wants to venture into condom making as it possesses the technology and know-how for setting up manufacturing facilities for this dipped latex product. “We hope to get a joint-venture partner that knows how to market condoms. We don’t have expertise in this area and it is not easy to create a brand,” says Lai. The major condom makers are currently not its customers.

On going downstream, Lai says, “It is not easy to quickly expand the hardware business. But the growth of consumer products can be exponential.”

As the government is supportive of the rubber resource-based industries, Lai feels that the product sector will continue to grow over the next 10 years.

Unlike many SMEs, Kendek is well prepared for wider and more intense competition from China and other Southeast Asian countries as Malaysia opens up its market to foreign players.

“We have long prepared ourselves for international competition. Our survival will not be threatened as we run our operation efficiently, and we continue to innovate and focus on quality. On top of that, we have built close rapport with our customers.”

Lai says his ultimate dream is to have Kendek managed and run by strong professionals, who can grow the group consistently into the next generation.

Recently, he hired several high-powered professionals to help run the company. “We set up the company 24 years ago. It is high time we injected new blood and ideas into it.”

For the long term, Lai says, “My children are still studying and I don’t know whether they will want to take over this company. Whatever it is, I hope the company will be professionally run and that it continues to grow consistently.”