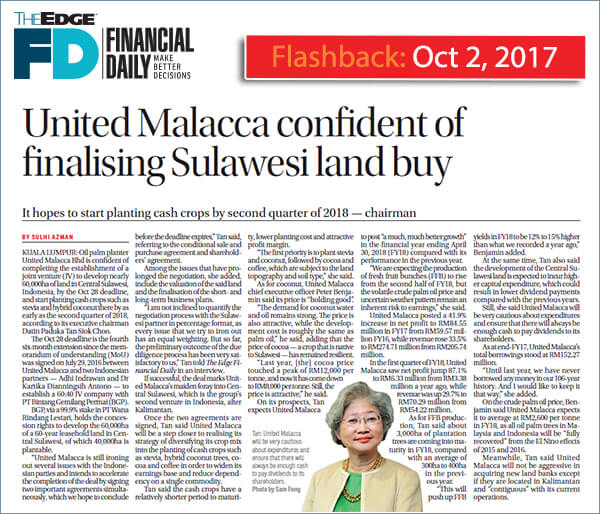 KUALA LUMPUR: After over a year since it put forth a plan to expand its plantation land in Indonesia via a joint venture with an Indonesian firm, United Malacca announced today that it has inked a conditional agreement to put the plan in motion.

Just earlier this month month, The Edge Financial Daily reported, quoting United Malacca's executive chairman Datin Paduka Tan Siok Choo that the group was confident of finalising the Sulawesi land deal by Oct 28. It first signed a Memorandum of Understanding on July 29 last year to look into partnering with BGP to get its hands on the land.

United Malacca said the proposed acquisition will bring it “a step closer” to realising its strategy of diversifying its crops mix to include cash crops like stevia, coconut, cocoa and coffee, in order to widen its earnings base and reduce dependency on a single commodity, palm oil.

"The proposed acquisition will allow United Malacca to have immediate access and a controlling ownership over the land which is located in Sulawesi, Indonesia,” it added.

Under the deal, it will buy over Clifton, which will hold a 60% equity interest in WRL after an internal restructuring in BGP and WRL.

The plan entails the disposal of all BGP shares by its current owners, Adhi Indrawan (who holds 75%) and Kartika Dianningsih Antono (who holds 25%) to Clifton and PT Sinar Kemilau Cemerlang (SKC), which will result in Clifton holding 65% in BGP, with SKC holding the remainder 35%.

Simultaneously, the present shareholders of WRL, i.e. BGP and PT Mahkota Nughara Permai, will sell 7.64% and 0.04% of their respective stakes to SKC, which will trim BGP's stakes down to 92.32%, while SKC holds 7.68%.

Shares in United Malacca closed unchanged at RM6.55, valuing it at RM1.37 billion.