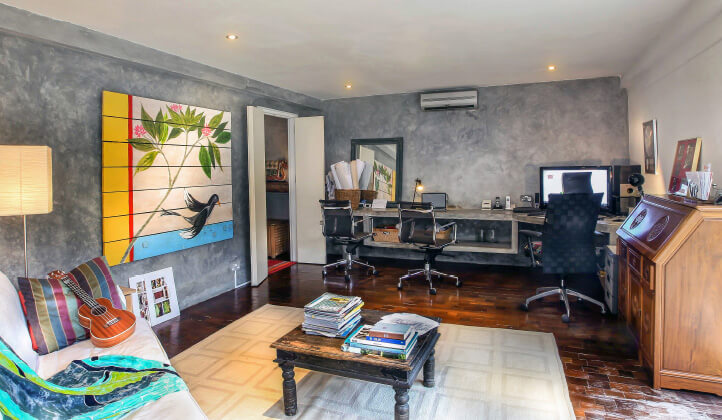 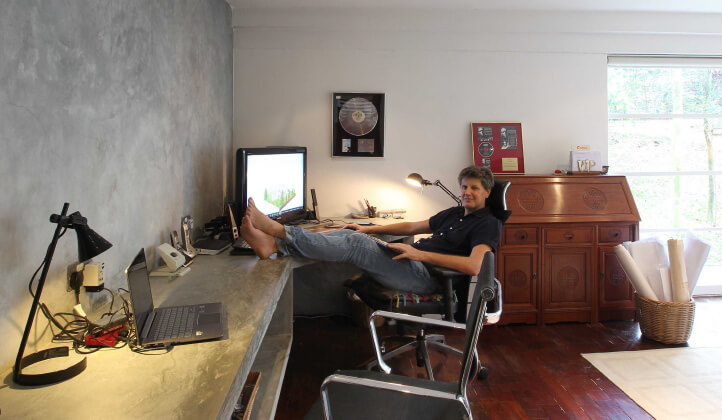 Heneberry uses his study and house to test design elements for upcoming projects, like his tadalekt soap polished cement desk 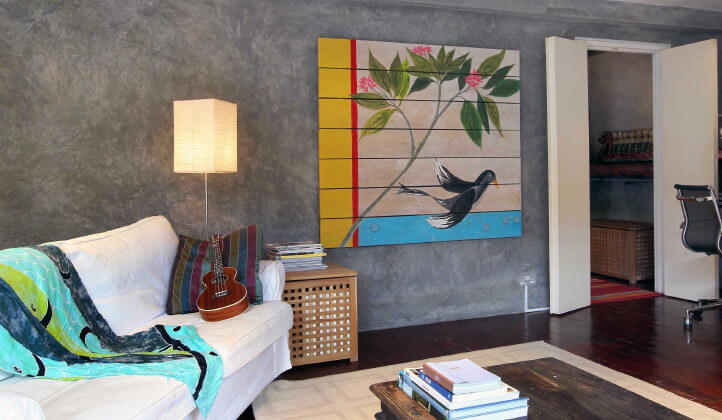 In this urban tropical home, restrained décor opens up creative and experimental possibilities for its designer owner

A home office should be a place where you feel inspired and also offers an element of comfort. Tony Heneberry’s study does just that while giving him the chance to experiment on his design projects. Much like the rest of his house, the study is very cool and tranquil — matching his lifestyle and personality.

The house boasts a majestic view of the Bukit Gasing forest reserve, and the structure has a cool tropical vibe that reverberates throughout every corner, including the study. Due to the amount of greenery surrounding it, most of the house does not require added ventilation.

Heneberry’s study was originally part of the carpark of his split-level house and was used as an open storage area. Ten years ago, he extended the area to create the study and a family room just beside it where they can watch television and play board games. The two spaces are separated by a bathroom in between.

Heneberry first came to Malaysia 23 years ago when he was working in the recording industry and was in charge of setting up operations for an international record company. He started his own advertising, communications and design company, which he later sold off. He has since been working from home, helping to develop properties as well as offering services such as designing home décor and furniture.

As a result, his study and house are often used to test design elements for upcoming projects. “Because of the houses that I design and help build, I like to treat my own house as a test run for the finishes,” he says. “The study fits into the rest of the house in terms of its simplicity. The common theme is that it is stripped back and unfussy but the textures and finishes of the study are experimental.”

His desk, which was cast in concrete on site, has a soap polished cement finish, which is a Moroccan technique called tadalekt that is usually used with crushed acrylic to change the colour in bathrooms. Tadalekt creates a velvety texture, giving it a gorgeous finish.

The change in lifestyle has been a welcome shift for Heneberry, who previously was in a stressful working environment. The ukulele casually placed on a simple white sofa is a reflection of his significant lifestyle change — working from home has given him more freedom to explore different projects and spend more time with his family. “I live a totally different lifestyle now. If you saw me five years ago, you would not have recognised me,” he says. “I was about 15kg heavier and I lived quite an unbalanced lifestyle with 50 to 60 people working in the company — it is not a big number but enough to cause a lot of stress. Now I like to spend a lot of time with the children and work out. Now, working on design projects is like therapy.”

Other personal touches in his home office include two framed records above his desk, a nod to his recording industry days, when he won two awards for album reissues of Nina Simone and Blues legends Buddy Guy, Muddy Waters and John Lee Hooker. Music still remains a big part of his life and he enjoys working with music playing in the background. He continues to add records to his already impressive collection.

The lone painting hanging in his study is another favourite detail of his workspace. As part of his family weekend art projects, the painting — which features a frangipani and a magpie — was inspired by the frangipanis facing his poolside and the magpies who like to drink water at the edge of the pool.

Heneberry is contented man who has managed to carve out a space that’s conducive to creativity and productivity. His home office is a statement of victory, of having made one of the best decisions he’d ever made some years ago.