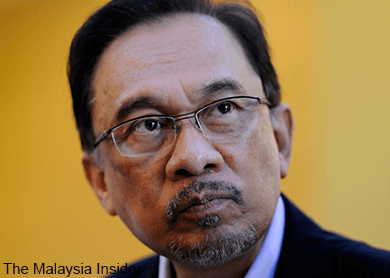 KUALA LUMPUR: Calling the detention of Datuk Seri Anwar Ibrahim as illegal and arbitrary, a United

The call by the UN Working Group on Arbitrary Detention, which comes under the UN Human Rights Council, was announced by PKR lawmakers yesterday.

“The group has urged that Anwar be released and reinstated his political rights.” said N Surendran, the Padang Serai MP who is also part of Anwar’s legal team.

Surendran said Putrajaya should not ignore the UN body’s decision, as it could risk damaging the country’s international reputation.

The multi-government working group held a hearing for over two months before reaching the decision, which was passed to Anwar’s lawyers, who were the main applicants, in early October.

Anwar was imprisoned in early February this year after the Federal Court upheld a Court of Appeal ruling holding him guilty of sodomising a former aide in 2008.

Anwar’s daughter, Lembah Pantai MP Nurul Izzah, said that she was grateful that the UN body had called for Anwar’s release.

The group was expected to make public their report this month, Nurul Izzah said.