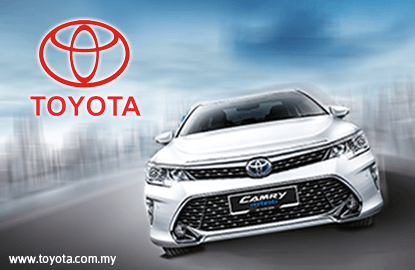 KUALA LUMPUR (Jan 14): UMW Holdings Bhd’s (valuation: 1.40; fundamental: 1.00) unit, UMW Toyota Motor Sdn Bhd, has announced that it will not be increasing the price of its Toyota Camry Hybrid vehicle this year, due to the energy efficient vehicle (EEV) incentive that was provided under the National Automotive Policy (NAP).

While other models under the Toyota stable have been revised for 2016, the Camry Hybrid will continue to be sold at the same price of RM174,900 throughout the year, as its EEV incentive runs till end 2016.

The model has been on sale since April 2015.

President of UMW Toyota Motor, Datuk Ismet Suki, said however that they can only confirm the continuation of the same price for the whole of 2016 and for the year to follow.

“We will need to discuss with the relevant government ministries again.”

“Without the incentive to offset the cost of the model, it would cost much higher, especially with the advanced Toyota Synergy Drive hybrid technology,” he said in a statement.

Ismet expressed gratitude to the government for lending its support for its hybrid assembly effort, which “demonstrates its commitment in developing Malaysia as the EEV hub of Asean.”

Most car makers are raising prices on the back of continued weakening of ringgit and rising cost of living, with the latest being national car maker Proton Holdings Bhd saying it may have to increase its prices after Chinese New Year in February, while Honda Malaysia has also increased its prices by two to three percent this year.