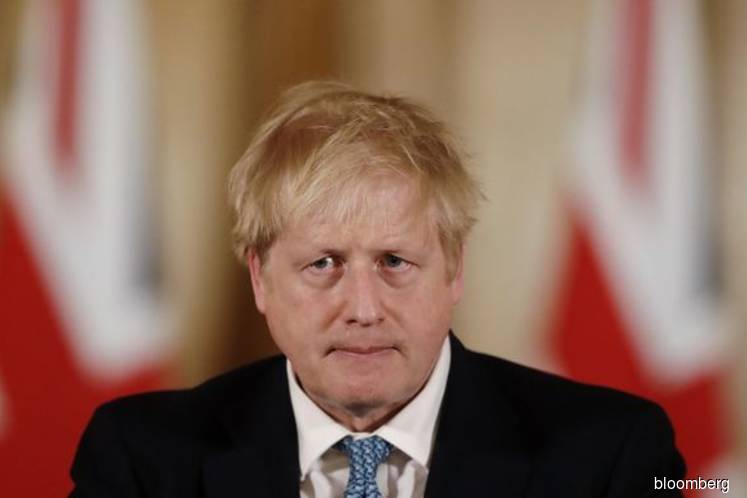 (April 7): Boris Johnson has been taken into the hospital intensive care unit for treatment for coronavirus after his condition worsened, his office said. Foreign Secretary Dominic Raab is now deputizing for the U.K. prime minister.

Johnson, 55, was admitted to St. Thomas’ Hospital in London for tests Sunday night because his virus symptoms had not cleared up, and he became more seriously ill Monday afternoon, a government spokesperson said in an email.

He remains conscious and was moved to intensive care at about 7 p.m. in case he needs ventilation to help him recover, an official said. Another official said the prime minister is receiving oxygen but is not on a ventilator.

“The prime minister is in safe hands with that brilliant team at St Thomas’s hospital,” Raab said in a pooled television interview Monday evening. “There’s an incredibly strong team spirit behind the prime minister -- and making sure that we get all of the plans the prime minister’s instructed us to deliver, to get them implemented as soon as possible.”

President Donald Trump said Monday evening that he was deeply saddened by the news of Johnson’s condition and that “Americans are all praying for his recovery.”

“I found Boris to be a fantastic person, just like a fantastic -- warm, strong, smart guy, he loves his country, you see that, I mean, he fought like hell for his country,” the president said.
Fever, Cough

The prime minister’s worsening illness comes at a critical time for the U.K., with scientists predicting the country will suffer the peak of its coronavirus outbreak in the next seven to ten days.

My thoughts and prayers are with @BorisJohnson and his family as he continues to receive treatment in hospital.

This horrific virus does not discriminate. Anyone can get it. Anyone can spread it. Please #StayHomeSaveLives
— Theresa May (@theresa_may) April 6, 2020

Johnson announced on March 27 that he was isolating himself after testing positive for coronavirus. On the evening of April 5, unable to shake the symptoms, he was admitted to St. Thomas’ suffering from a “persistent” cough and a fever.

Throughout the day Monday, his officials insisted the prime minister remained in charge of the government and was continuing to work on his papers while keeping in touch with his team. He was said to be “in good spirits” Monday morning after a comfortable night.

Thinking of @BorisJohnson and his family tonight. Get well soon. You are in great hands and we all want you safe, well and back in @10DowningStreet.
— David Cameron (@David_Cameron) April 6, 2020

Reporters raised questions over how seriously ill Johnson was after Raab, the U.K.’s first secretary of state, disclosed that the pair had not spoken since Saturday. The premier’s spokesman declined to say whether he had been tested for pneumonia or what the results of any tests had been.
‘Utterly Transparent’

“They’ve got to be utterly straight with us now, utterly transparent about what’s going on,” Sonia Purnell, a biographer of Johnson, told the BBC.

“I’m shocked like anybody else -- he’s a friend,” Duncan Smith told the BBC. “I’m deeply saddened that it has come to this.”