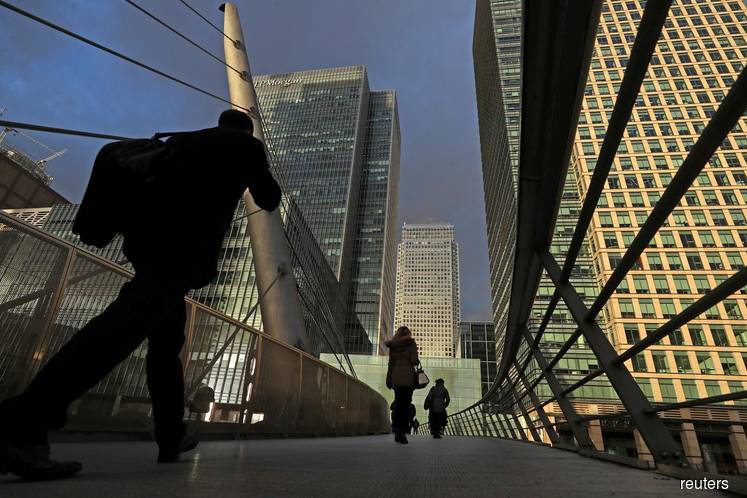 LONDON (Jan 13): Britain's economy grew at its weakest annual pace in more than seven years in November, raising expectations that the Bank of England will cut interest rates later this month.

Monday's official figures showed the economy in November -before last month's decisive election win for Prime Minister Boris Johnson — was just 0.6% larger than a year before, the weakest expansion since June 2012.

The November figure represented a slowdown from annual growth of 1.0% in October, after that month's growth pace was revised up from previously reported data.

Output in November alone shrank by 0.3%, the biggest drop since April. Economists polled by Reuters had expected unchanged output for the month.

The weak data, reflected the uncertainty of last autumn about Brexit and the election, said John Hawksworth, chief economist for accountants PwC.

"It is too early to say for sure if economic momentum will pick up in the new year now the political situation is clearer, but our latest survey of the financial services sector with the CBI does suggest some boost to optimism since the election," he said.

Sterling fell and government bond yields headed lower as financial markets priced in a 50% chance the Bank of England will cut interest rates on Jan 30, after its next meeting.

The BoE predicted in November that the economy would eke out limited growth in the fourth quarter, before recovering in 2020. That forecast assumes progress towards a post-Brexit trade deal and a reduction in US-China trade tensions.

In the past week, BoE Governor Mark Carney — who steps down in March — and two other rate-setters, Silvana Tenreyro and Gertjan Vlieghe, said a rate cut could be needed if those assumptions prove over-optimistic.

However, there have been some signs that business confidence has revived since Johnson's Conservatives won an unexpectedly large majority in the Dec 12 election.

That victory put Britain on course to leave the European Union on Jan 31 with a transition deal. However, Johnson has only given himself 11 months to reach a long-term trade deal with the EU, and some businesses fear they could face tariffs and other obstacles to trade with the EU from 2021.

Looking at the three months to November, which smoothes out some volatility, the economy grew by 0.1% versus poll forecasts for a 0.1% fall, due to unexpected upward revisions to September and October output, which the ONS said reflected late survey returns.

"Overall, the economy grew slightly in the latest three months, with growth in construction pulled back by weakening services and another lacklustre performance from manufacturing," ONS statistician Rob Kent-Smith said.