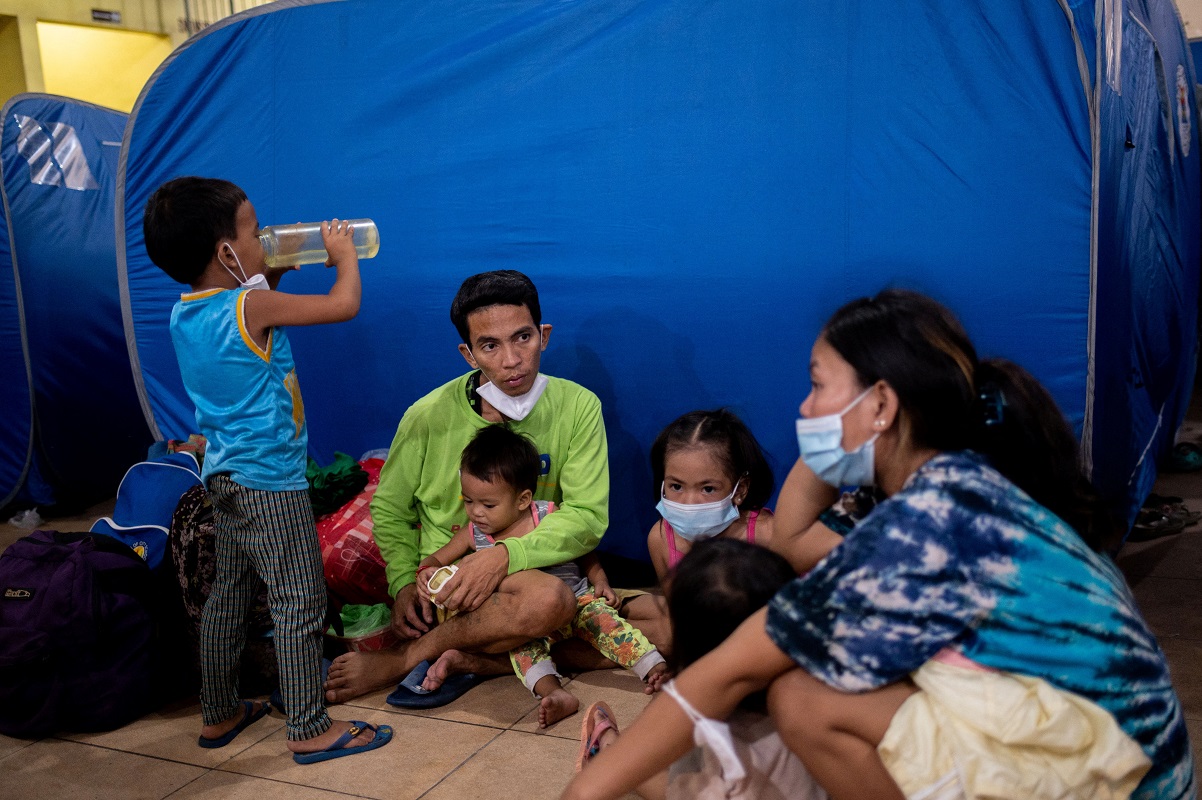 A family takes shelter at an evacuation centre, in preparation for Super Typhoon Noru, in Manila, Philippines, Sept 25, 2022. (Photo by Reuters)

The typhoon, called Karding locally, is packing maximum sustained winds of 140 kilometres per hour (km/h) near the centre and gustiness of up to 170km/h, the weather bureau Pagasa said in its 5am report on Monday. It was last located over the coastal waters of Zambales province in central Luzon and headed to the South China Sea on its way to Vietnam.

Noru, which hit land as a super typhoon, has weakened from the sustained winds of 195km/h and gusts of up to 240km/h recorded on Sunday. Heavy to intense rains are expected over the capital region and agricultural provinces on the main Luzon island until early Monday morning, the local weather bureau said.

Marcos, in a Facebook post, said he has approved the recommendation of the disaster coordinating council to halt government work and school classes in Metro Manila and several regions on Monday.

The Bankers Association of the Philippines, the Philippine Stock Exchange and the Philippine Dealing System late Sunday announced separately there will be no trading in the foreign exchange, stock and bond markets on Sept 26. The Bureau of the Treasury delayed by a day the regular bills and bonds auctions to Tuesday and Wednesday.

About 20 cyclones pass through the Philippines each year, causing loss of lives and damage to homes, infrastructure and agriculture.

Farmland that may be affected by the typhoon could reach 1.47 million hectares where 75% of the nation’s standing rice crops are planted, the Department of Agriculture said Sunday, which risks fanning inflation.

In 2013, Super Typhoon Haiyan killed more than 6,300 in the Southeast Asian nation. In September 2009, Typhoon Ketsana killed more than 460 people and caused 11 billion pesos (US$188 million) of damage to infrastructure and agriculture after dumping a month’s worth of rain on the capital region in a day.

Preemptive evacuation were made in provinces that will be on the typhoon’s path particularly in coastal and disaster prone areas, according to local media including ABS-CBN and the Philippine Daily Inquirer.

As early as noon Sunday, more than 2,500 people were stranded in various ports as sea travel was halted, the Philippine Coast Guard said. More than 40 domestic and five international flights were cancelled on Sunday, the Manila International Airport Authority said.

Ayala Land Inc, one of the nation’s biggest developers, shut its shopping malls early and allowed shoppers to wait out the storm inside the facility for safety. SM Prime Holdings Inc, the largest shopping mall operator, said free wifi and charging stations will be provided to customers.

The weather bureau warned of “at times torrential rains” in Metro Manila and over two dozen provinces through early afternoon Monday. “Widespread flooding and rain-induced landslides are expected, especially in areas that are highly or very highly susceptible to these hazard,” it said.