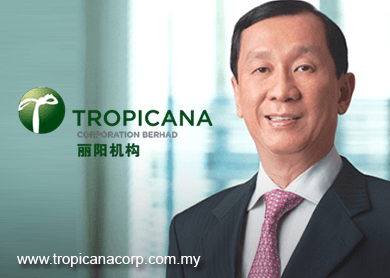 Under Tan’s guidance, Tropicana has made its place among the top 10 property developers in Malaysia, with a record revenue of close to RM2 billion and total assets over RM7.2 billion as at FY14.

“I have turned 60 this year and after having dedicated more than three-and-a-half decades of my life to the business, it’s timely to pass the baton to the new generation of leadership,” said Tan in a statement today.

“Both Yau and Dickson have been instrumental in formulating and leading the transformation journey of the group. Together with the other board members and senior management team, I have full confidence that they can effectively lead Tropicana into greater heights,” Tan added.

Tan is still the controlling shareholder of Tropicana.

“While the board of directors respects Tan Sri Danny's decision to retire from an active corporate role in the company, we take comfort in the knowledge that we will continue to have his advice and guidance at all times, as we endeavour to take the Tropicana group to a higher level and in its position as a premier property developer in Malaysia,” said Tropicana chairman Tan Sri Rastam Mohd Isa in the statement.

Meanwhile, the group has streamlined its board which will see four out of 10 directors in Tropicana becoming independent non-executive directors.

Dion Tan Yong Chien, the third son of Tan, has been appointed as executive director.

“With the new board composition, the group is expected to further strengthen its commitment of delivering innovative and quality products that enhances shareholders’ value,” said the group.