Two tiny complicated reasons why this watch costs US$150,000 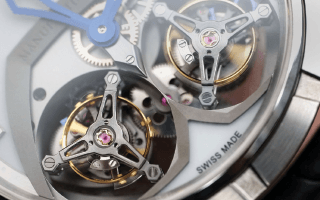 IF one tourbillon is a welcome but not entirely necessary addition to a watch, the existence of two is a little bonkers. The little devices are intended to negate the effect of gravity, making for more accurate timekeeping — but there’s debate over whether having more than one gives additional measurable benefit. And yet, with the 1770 MicroMegas Double Tourbillon, niche brand Manufacture Royale sets two linked tourbillons to rotate at different speeds side by side.

Whatever you think of the effectiveness, this right here is some pretty serious watchmaking.

The tourbillon on the left rotates once every six seconds and looks like it had a few too many espressos, while the one on the right takes a more leisurely one-minute turn. In the prototype I saw at Baselworld, the two balances were also beating at different rates, but they’ll both be at the same 3 or 4 hertz (Hz) when genuine production starts. Having a super-slow 2Hz balance next to one of a more typical speed looks awesome, but a shake of your wrist or the tiniest shock and the accuracy drops dramatically.

The movement inside is automatic and is wound by a fully skeletonised rotor that you can barely see. It also carries 80 hours of power reserve, which is impressive for a watch of this complication. Those tourbillons gobble power, so the barrel must be massive and the gear trains very efficient to achieve this.

Overall the MicroMegas has an industrial look — mostly brushed finishes and design flourishes verging on steampunk (but luckily stay on the right side of that line) — and it’s large. I expected it to nearly crush my wrist when I tried it on, but it was surprisingly comfortable. The fully titanium case and bezel keep it light for its size. There are rose gold and two-tone versions as well, but I’d stick with all titanium because of the weight increases.

This watch could very easily come off as annoyingly ostentatious — and with two tourbillons, it’s far from shy — but it’s about as understated as a watch of this complication level can be.

The 1770 MicroMegas Double Tourbillon will be available from Manufacture Royale later this year and will start at US$151,000 (RM561,720) for the all-titanium versions, going up to US$181,000 for the rose gold model. Numbers will be limited naturally by production, but this is not a limited edition. — Bloomberg