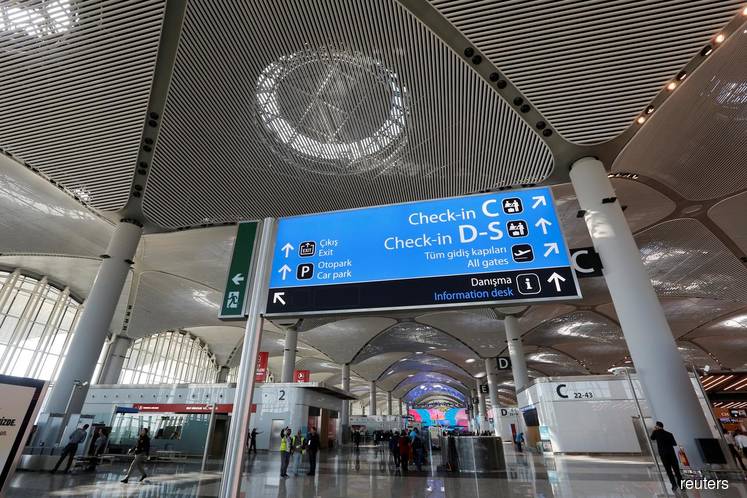 ANKARA/ISTANBUL (March 13): Turkey said on Friday that it is halting flights to and from nine European countries including Germany and France until April 17 as it ramped up measures to halt the spread of 2019 novel coronavirus (Covid-19) and reported three more cases, bringing the total to five.

Turkey became the last major economy on Wednesday to report an outbreak of the coronavirus, after taking what the World Health Organization (WHO) described as "vigilant, cautious" measures to delay the disease.

Transport Minister Mehmet Cahit Turhan said the suspension of flights to and from nine countries would take effect from 0500 GMT on Saturday.

The countries are Germany, France, Spain, Norway, Denmark, Austria, Sweden, Belgium and the Netherlands. Turhan said the list could be updated, depending on developments.

Turkey has already suspended flights to and from Italy, China, South Korea, Iran and Iraq.

Turkish Airlines chief Bilal Eksi said the company would provide passengers with tickets to the nine countries, with "the best form of refund and ticket change terms" in light of the measures.

Speaking alongside Turhan, Health Minister Fahrettin Koca said Turkey now had five confirmed cases of the coronavirus and that all the patients were "within the same circle, same family".

"All five cases are directly linked," he told reporters, adding two of the patients were experiencing breathing problems.

On Thursday, Turkey moved to close schools for one week and universities for three weeks from March 16, while also ruling sports events be held without spectators until the end of April, to help contain the spread of the virus.

In a phone interview with Reuters on Friday, Irshad Shaikh, the WHO Health Security Program Leader in Turkey, said the spread of the virus over the coming days would determine whether additional measures would be needed.

"Thus far, as of today, we still see a manageable scenario, not the worst case scenario," he said.

Shaikh said hospitals around Turkey were taking necessary measures to try to prevent medical personnel from becoming infected with the virus, and that the government was coordinating its efforts with the WHO.