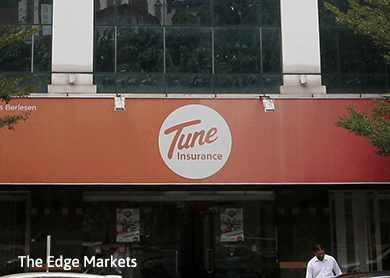 The underwriter for the general and life insurance registered a net profit of RM14.35 million or 1.91 sen per share a year ago.

Tune Ins attributed the better earnings to the increases in pre-tax profit (PBT) of RM4.9 million in general insurance and RM400,000 in general reinsurance respectively, offset by higher management expenses.

No dividend was declared for the current quarter under review.

The decline in net income was due to higher management expenses of RM6 million, offset by an increase of RM800,000 in PBT from general reinsurance and RM700,000 in share of profit from associates in Thailand.

"Airports Council International (ACI) reported that global passenger traffic increased by 4.2% year-on-year for the month of June with Asia-Pacific airports reporting an overall growth in passenger traffic of 8.3% for 1HFY15," said Cho.

He added that the travel climate in Malaysia and Thailand is still registering a steady growth trend where the group will continue to see strong contribution from their partners.

Going forward, the group expects its Middle East joint venture to continue to grow with the activation of offline agents and new distribution channels in the Middle Eastern markets.

"Thailand affiliates are also expected to post higher profit contributions as their businesses grow in the coming month," the group said.

As part of the Asean expansion, Tune Ins has embarked on its acquisition of a 50%+1 share stake in an Indonesian general insurer, which is pending regulatory approval.

The acquisition is expected to be completed some time in the next three months.

In addition, the group also continues to strengthen its digital channel for broader consumer access.

"Notwithstanding the recent political developments, economic situation and currency volatility in the region, we are confident that our second half performance will continue with a similar growth trend based on our current business pipeline and forward sales," the group added.