Tun Razak would have been heartbroken 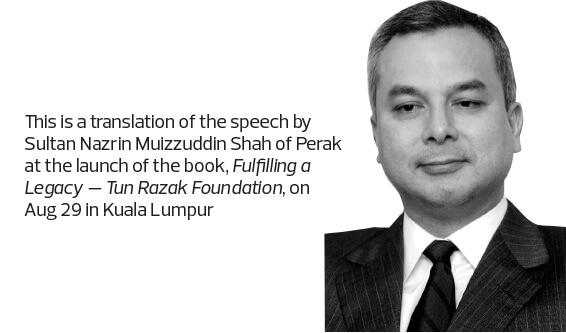 Allah says in Verse 35 Chapter 21 (Al-Anbiya) in the Quran, “Every soul will taste death. And We test you with evil and with good as a trial; and to Us, you will be returned.”

On Jan 14, 1976, Tun Abdul Razak Hussein breathed his last in London at the age of 53. A woman lost her husband, five children lost their father, the people lost their leader and Malaysia lost a statesman who was steeped in humanity.

The late Tun Abdul Razak took on the responsibility of being the second prime minister of Malaysia on Sept 22, 1970, working with full sincerity and dedication throughout the time he held that position of trust. He accepted that heavy responsibility at a time when the country was facing the following five scenarios:

• The country was in an incubator of political recovery, following the black episode of racial strife on May 13, 1969. Parliament was suspended and the National Operations Council (NOC) was set up to give the nation room to consider a more appropriate formula for political balance in a country where the citizens are so diverse, as it touches on sensitive issues concerning religion, race, culture and language.

• Umno and Perikatan, the political parties that the people had entrusted with the leadership role, were facing a huge confidence deficit, which was clear as the support of the people had practically vanished when it lost the two-thirds majority in the third general election on May 10, 1969.

• The Malays and bumiputeras, who were the most discriminated against during the British colonial era, were in a mood to protest and revolt because the nation’s independence did not have any meaning for them as the majority were living hand to mouth in their land of plenty. On average, the Malays and bumiputeras were frustrated as they could not see any serious commitment by the government to nurture their fortunes and uphold the Malay language as the national language, as set out in Articles 152 and 153 of the Constitution.

• Infrastructure development such as roads, electricity, clean treated water and social amenities in the rural areas, where the majority of the Malays and bumiputeras lived, were at a minimum level.

Up until his dying breath, Tun Abdul Razak was in the prime minister’s seat for 1,941 days, a period that was not too long, but he has left a lasting impression in the minds of the people and his name remains etched in the country’s history. What is the legacy left by him to his country and race?

• The NOC was dissolved and Parliament reinstated in 1972, returning the power to elect the government to the people.

• Restoring the confidence of the people in Umno leaders and the party as well as a new political coalition known as Barisan Nasional, which clearly gained the support of the vast majority of the people in the 1974 general election. The Umno leadership was also boosted by a line-up of youthful, dynamic and more educated people, including Tengku Razaleigh Hamzah, Dr Mahathir Mohamad, Musa Hitam, Ghazali Shafie, Tengku Ahmad Rithauddeen, Mokhtar Hashim, Rais Yatim, Abdullah Ahmad, Rafidah Aziz and Marina Yusoff.

• The Malays and bumiputeras were entrusted to lead various government organisations, private and corporate bodies, in which they proved their ability to take on challenging responsibilities, which instilled new confidence and pride in the people.

• The concept of urbanisation, namely the development of rural areas, was prioritised with the building of various infrastructure, including drainage and irrigation systems, roads, schools and clinics as well as treated water and electricity along with large-scale land-clearing programmes that adopted modern agricultural methods. FELDA is synonymous with Tun Abdul Razak. Not only did FELDA introduce the modern agricultural system among settlers but the educational facilities that were provided in the FELDA areas have also directly helped develop the intellectual and cultural capital of the settlers’ children, which subsequently produced many professionals in various sectors.

• Multiply educational facilities at various levels by building schools around the country and increasing the number of full-boarding schools as well as institutes, colleges and universities. The Serdang Agricultural College and the Kuala Lumpur Technical College were upgraded to university status. ITM was expanded with more professional courses and the student intake increased. Universiti Kebangsaan Malaysia, which was founded in 1972, raised the prestige of the Malay language as a medium of knowledge in higher education.

In addition to the five main legacies left by Tun Abdul Razak, there are two elements that reflect the values of humanity and the spirit of Islam, which are indispensable.

• He had no greed for power, which was proved by his willingness to restore power to the people and the willingness to hand over that power as soon as possible to the line of successors by entrusting the responsibilities and tasks to the youth, whether in the party, the government or the administration.

• His trustworthiness and honesty, embodied in the transparency and integrity of his administrative practices; his great prudence in spending government funds and great thoroughness in ensuring that public funds were not misused on himself or his family; insisting on paying back every sen of government money, even on a bottle of hair cream or a toothbrush for his personal use, which might have been overlooked by his staff, or had mistakenly used office money to purchase while he was on duty overseas.

During his lifetime, Tun Abdul Razak did not display the image of a pious person. His sincere words and deeds were not an act to be displayed as a public spectacle. His speeches were so unpretentious, rarely quoting Quranic verses or the hadith. However, his trustworthiness, honesty and transparency clearly reflected the nature of a person who had a high level of faith that appreciates the spirit of a devoted servant that holds his accountability to the Creator. Tun Abdul Razak acknowledged that anything that is done in this world can never be hidden from Allah.

“Road to Nationhood”, which was the theme of his mandate, was an embodiment of his aspirations to defend the fate of the people, along with encouraging the ranks of administrators and technocrats to practise the culture of honesty, firmness and boldness in stating the facts and the truth.

“As civil servants, I hope you will stand up to us politicians, and not allow yourselves to be dominated by us. Because in a true democracy, the civil servants have a duty to perform. The future of our country’s democratic way of life is dependent on you.”

On the opening page of Fulfilling a Legacy, his vision was aptly stated as follows:

“It’s important in a democratic society that the government is always exposed to public opinion and feeling. Any government will not be tolerated unless it represents the hearts and minds of the people.”

His openness and willingness to accept advice regardless of how small the matter was, is illustrated on page 28 of this publication, when Tun Abdul Razak was prevented from driving his car alone with his family in Kuala Lumpur. And in Bangkok, where he had to ask the then chief minister of Sabah Donald Stephens to board a taxi because his aide-de-camp, Hanif Omar, disallowed him, Singapore’s Finance Minister Goh Keng Swee and Stephens to go to a club without any aide. Although at the time, Hanif was young and did not hold a high position, he firmly held the car door and said,“Sir, you are not going anywhere without me. My instructions are to be by your side at all times.”

Hanif had done his job as an aide-de-camp firmly and courageously, fulfilling his responsibilities professionally, despite the risk of being scolded, snapped at or transferred. He was ready to face any possibility, but did not compromise on what he considered to be a matter of principle. Tun Abdul Razak’s stand in appreciating and respecting the views of his officers enabled personalities, such as Raja Mohar, Mohamed Suffian Hashim, Taib Andak, Gen Ibrahim Ismail, Ismail Ali, Abdullah Salleh, Abdullah Ayob, Zain Azraai, Saw Huat Lye, Chong Hong Nyan, K Pathmanaban, Raja Muhammad Alias, Tunku Shahriman, Rama Iyer, Arshad Ayub and many others, to not be afraid to voice their opinions clearly and honestly, helped him get the best counsel before making important decisions. Such a work culture and relationships are very important and beneficial for politicians and public officers to adopt. The firmness, courage and directness shown by Hanif and his colleagues should serve as a guiding compass and a lesson for administrators in this country.

It has been over 40 years since Tun Abdul Razak was buried at the National Mausoleum. Indeed, the country and the people today have not only lost the physical form of a great statesman but are also more concerned about losing his vision of building a strongly united nation nurtured through school as well as leadership values based on trust, sacrifice, integrity and accountability so that the nation remains independent, prosperous and respected.

Tun Abdul Razak, if he were still living, would surely be disappointed to see four scenarios occurring in the country today.

• Unity of the people: In the first page of this publication, is recorded one of his visions:

“The future of our country depends on one important thing, that is on the unity of our people of various races.”

In the eagerness to gain support, political parties now are increasingly prone to inflaming the issues of religion and race.

• The National Education Policy, as set out in the Razak Report, underscores the important role of the school in fostering national unity through education. Today, the implementation of the National Education Policy has failed to meet the goal of schools in playing the role of uniting the different communities. The younger generation of the various races today, through various schooling streams, do not have the opportunity to interact and get to know each other, but instead grow up separated in their respective ethnic communities.

• The abuse of the New Economic Policy, especially in the distribution of wealth, resulting in a massive leakage of bumiputera economic holdings, has not only led to misconceptions among non-bumiputeras, who describe the policy as discriminatory, but also angered the bumiputeras.

• Corruption and integrity. Tun Abdul Razak would be heartbroken to see the revelations upon revelations and arrests upon arrests for massive bribe-taking, involving people in high office and educated individuals, concerning a large amount of money, which has definitely tarnished the nation’s reputation.

To Allah Subhanahu Wa Ta’ala, we pray that the vision and essence of Tun Abdul Razak’s sacrifice will stay in the minds and hearts of the people. Hopefully, his vision and values are revisited, appreciated and spread in the minds and souls of every Malaysian.

The ceremony to commemorate Tun Abdul Razak would remain incomplete if we forget the important role of another person, who is noble and honourable, hidden behind the veil, and was the source of strength for Tun Abdul Razak. That person is Tun Rahah, who had been betrothed to Tun Abdul Razak, and has been very humble despite being the wife to first, the deputy prime minister, and then the wife of the prime minister. Tun Rahah had five children with Tun Razak. After losing her husband, she took full responsibility in guiding and educating their five sons to be successful human beings.

Based on the stories in Fulfilling A Legacy, it is evident that Tun Rahah should be seen as an example to all woman. To Tun Rahah, the country and the people are indebted to you for loaning your beloved husband to the nation. Tun Rahah, thank you and please accept our appreciation of you.