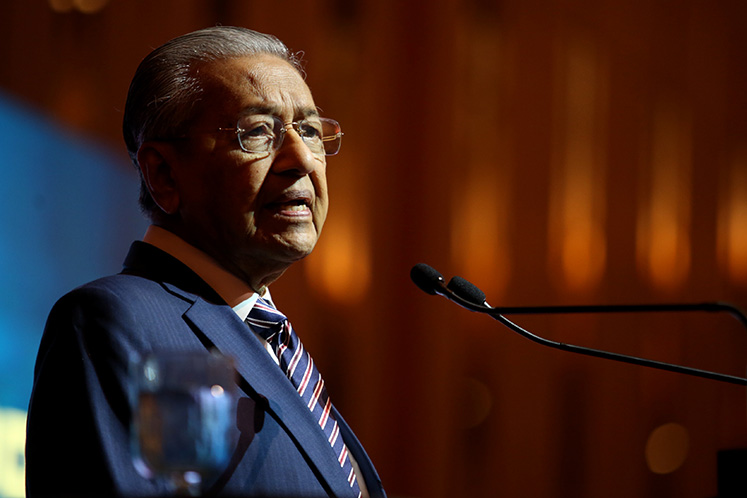 PETALING JAYA (Nov 20): Prime Minister Tun Dr Mahathir Mohamad has hinted about the possibility of reshuffling the Cabinet following the defeat of Pakatan Harapan (PH) in the recent by-election for the Tanjung Piai Parliamentary seat.

PH chairman-cum-Bersatu chairman, however, said the decision on the matter “would not be made today or tomorrow”.

"(It will be made) after we study the achievement and capability of the existing Ministers, and only then we will discuss the possibility of making a Cabinet reshuffle,” he said at a media conference after chairing a meeting of the Top Leadership Council of Bersatu, here today.

In making any move towards a Cabinet reshuffle, Dr Mahathir conceded that he had to face certain obstacles.

"The constraint is that although I am the Prime Minister, I have to give consideration to the (PH) component parties , I cannot easily change or drop anyone.

“That is why I will take some time,” the Prime Minister said.

Regarding the defeat of PH in Tanjung Piai, Dr Mahathir said among other things, it could be “because our party is new, not adequately mature yet, have not organised the party really well in Tanjung Piai and the other places”.

According to him, the high cost of living, the economic situation, aid for the people and so on were among the issues raised.

"Eventually, we feel there is a need for us to have a Cabinet reshuffle,” said Dr Mahathir.

"As the Prime Minister. I am responsible for making Cabinet reshuffles, that is why I listen to their (members of the Bersatu Top Leadership Council) views, and I will give consideration to the pressure for a Cabinet reshuffle,” said Dr Mahathir.

Meanwhile, the Prime Minister said no radical changes would be made before Malaysia becomes the host for the Summit Meeting of the Asia Pacific Economic Cooperation (APEC) scheduled to be held in November next year.

“I feel there is still a lot of work to be done and next year we will host the APEC meeting,” he said, adding that it would be an important international conference that could not be taken lightly.

"I don't want too many changes to take place because we need to make necessary preparations as it (APEC) involves many countries. We have to be careful," the Prime Minister said.

Meanwhile, Dr Mahathir acknowledged that the many plans launched by the PH government would take time before the results could be seen.

However, he also drew attention to the changes carried out by PH to make the government administration more effective, including reducing corrupt practices.

On the meeting between PKR deputy president Datuk Seri Mohamed Azmin Ali and a group of opposition MPs recently, Dr Mahathir said the matter must be resolved at the level of PKR itself.

Describing the matter as an internal problem of PKR, the Prime Minister suggested that the party should investigate the reason for holding the meeting.

“I have not talked to him yet. I do not know why the meeting was held, it involves other parties as well," he added.