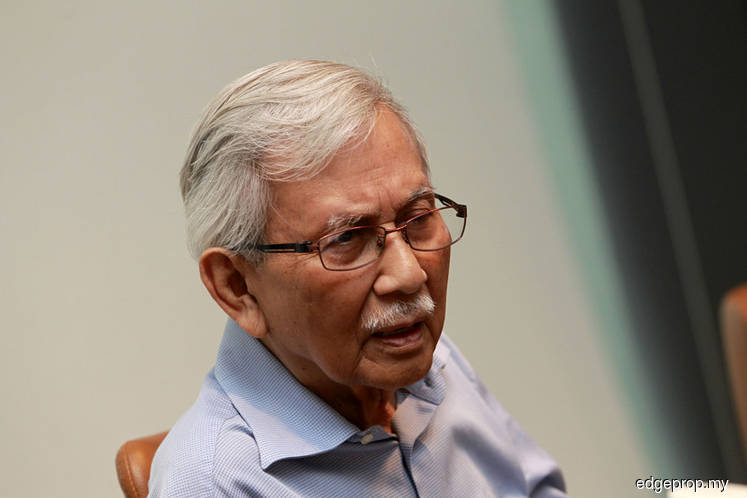 PETALING JAYA (Aug 23): It is learnt that former Malaysian Fiance Minister and businessman Tun Daim Zainuddin has met up with Taman Tun Dr Ismail Residents Association (TTDI RA) to understand their concerns on the development which takes place at part of the land in Taman Rimba Kiara.

According to sources, the meeting which was held in Daim’s office lasted for less than 30 minutes, during which representatives from the RA managed to raise all the issues regarding the developments which could affect the residents’ living environment in TTDI.

Daim was the chairman of the Council of Eminent Persons (CEP) which has seen its mandate expire on August 20, although Prime Minister Tun Dr Mahathir has emphasised that the CEP will not disbanded even though its 100-day mandate is over.

However, the sources refused to disclose more details as the FT Minister is expected to make further an announcement on the matter soon.

When contacted by EdgeProp.my, Khalid said there were some loose ends that needed to be tied up before he can finalise the solution and announce it to the public.

Earlier this month, Khalid Samad had stressed that no development should be allowed within Taman Rimba Kiara.

He also offered suggestion to scale down the land size of the project from 4.8ha to 2.4ha and reduce the number of serviced apartment blocks from the current eight, calling the figure “a bit extreme”.

The proposed development by the developer Memang Perkasa Sdn Bhd, which Malton Bhd holds a 51% stake entails the construction of 42- and 54-storey blocks of serviced apartments, as well as a 30-storey tower of affordable apartments for the relocation of the longhouse residents.

The Save Taman Rimba Kiara Technical Working Group had offered a counterproposal which requires the construction of townhouses at a cost of RM15 million.

The group said it will achieve the aim of offering permanent affordable housing for the longhouse residents without encroaching on the park.

The RA had filed for a judicial review of the development order granted by Dewan Bandaraya Kuala Lumpur to Memang Perkasa.

The hearing has been fixed for Sept 26 and 27 at the Kuala Lumpur High Court.