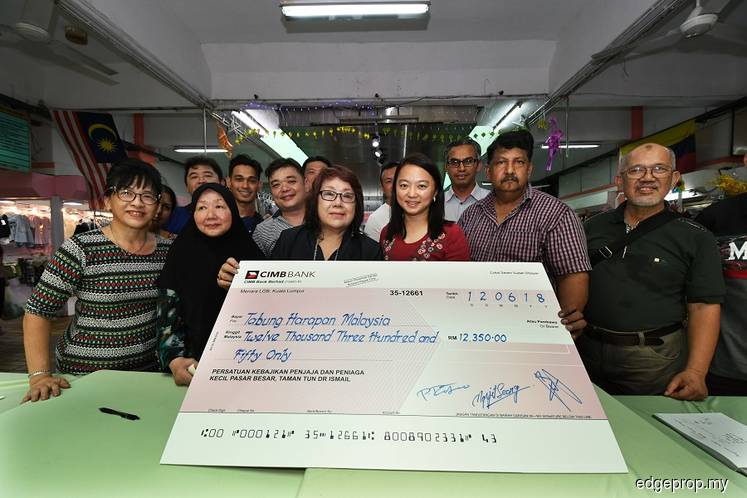 PETALING JAYA (June 12): The Taman Tun Dr Ismail (TTDI) Market Traders’ Association has expressed their fears that the market may make way for redevelopment in the future.

Association chairperson Jenny Ng Yit Seong said majority of the petty traders and hawkers have been doing business at the 3-storey market in TTDI, Kuala Lumpur for over three decades.

“There was a proposal to demolish and redevelop the market a few years ago but we fought hard to defend our place. We love the market so much and we do not want it demolished in either the past or future,” she told reporters after handing over RM12,350 in donations from the traders to Segambut MP Hannah Yeoh for Tabung Harapan Malaysia (THM), at the market today.

Yeoh represented the government to witness the donation campaign and receive a mock cheque from the association.

The donation campaign among the market traders began 10 days ago.

Located at Jalan Wan Kadir in TTDI, the 30-year-old TTDI market faces Jalan Damansara about 450m away from the TTDI MRT (Mass Rapid Transit) Station. Housing about 200 traders, the market attracts a few thousand customers during weekends and nearly a thousand on weekdays.

A redevelopment proposal was submitted to Kuala Lumpur City Hall (DBKL) in 2012, but nearly 100 traders had protested against the proposal.

Yeoh said the development situation in the area including the proposed development at Taman Rimba Kiara had raised concerns over the possibility that the market could be demolished for redevelopment in the future.

“The previous administration may have plans while some developers are eyeing lands in TTDI to be developed, but we want to ensure due diligence is done [for any project] by the new Federal Territory minister, or local council if no minister is appointed,” she said.

Yeoh urged the future reformed local government to be more transparent and extend due diligence to all its contracts and accounts.

“Previously, a lot of people had requested public information from the local council, such as environment impact assessment and traffic assessment of their community, but they had been turned down.

“The people are requesting that the new government be more transparent in administration. These are changes that MPs in Kuala Lumpur hope to see — a more transparent, more people-friendly and more accountable government,” she stressed.

On Taman Rimba Kiara’s controversial redevelopment project, Yeoh refrained from commenting as the case is currently investigations by the Malaysian Anti-Corruption Commission.

The proposed development involves the building of eight blocks of 42- and 52-storey high-end serviced apartments (1,766 units) and a 30-storey affordable housing block (350 units).

A judicial review of the conditional planning permission and development order granted by DBKL to Memang Perkasa, of which Malton Bhd holds a 51% stake, will be held tomorrow.